The Story of Tutti Frutti Jewels, As Told by a Cartier Descendant

By Francesca Cartier Brickell
Francesca Cartier Brickell is a direct descendant of the Cartier family. Inspired by the discovery of a long-lost trunk of letters in the cellar of her grandfather, her recently-published book, 'The Cartiers: The Untold Story of the Family Behind the Jewelry Empire', is the result of a decade of independent research into her family and the business they founded.

C artier’s brightly colored Indian-style jewels of the 1920s and 30s weren’t given the “Tutti Frutti” name until the 1970s. At the time, they were known simply as ‘pierres de couleur’ (colored stones) although Jacques Cartier [who ran Cartier London and often traveled to India in the 1920s and 1930s] also referred to them as “Hindou jewels.”

Made up from carved gemstones Jacques had brought back from the East, they combined the exotic with the modern and were an instant hit among the trendsetters of the day.

They were also, perhaps surprisingly, more affordable than other similarly striking Cartier jewels, making them ideal for the Depression years. “Many of the Indian gems,” Jacques revealed, “are not so flawless as those used here.”

But this was one instance when he was less interested in purity than in color. Focused on making an impact through the mix of colors, he was willing to sacrifice on each gemstone’s clarity and translucency.


After returning from his Indian trips, Jacques’s first port of call was Paris, where he would meet Louis and share the gemstones he had acquired. Both fascinated by Eastern cultures, the two brothers owned many of the same illustrated books on India (on subjects as diverse as rugs, traditional dress, and miniature paintings) in which they found inspiration for motifs that they would later use on their creations.

Frank's Files At Home: Tutti Frutti and the House of Cartier

But the books, often in black and white, didn’t express the overwhelming explosion of color that Jacques had seen firsthand, and it was this that he wanted to capture in the Tutti Frutti jewels: “Out there everything is flooded with the wonderful Indian sunlight,” Jacques explained. He continued:

“One does not see as in the English light, he is only conscious that here is a blaze of red, and there of green or yellow. It is all like an impressionist painting. Nothing is clearly defined, and there is but one vivid impression of undreamed gorgeousness and wealth.”

One rebellious lady particularly enamored with the Indian style would prove pivotal in popularizing it. Daisy Fellowes, the heiress to the Singer sewing machine fortune, was a celebrated society figure, admired and feared in equal measure.

She was the embodiment of thirties chic, Jean Cocteau said of her that she “launched more fashions than any other woman in the world,” such as the avant-garde idea of wearing jewels with sweaters. But she could also be cruel, said to have a wicked wit and a penchant for “cocaine and other women’s husbands.” In 1933 she became Paris editor of Harper’s Bazaar but left two years later because she found it boring. She preferred to be an icon of fashion herself, and in Cartier, she saw a firm that made the trends rather than followed them.

In 1935, as Paris was “overrun with Maharajas, casually wearing fabulous jewels,” Daisy held an Oriental Ball for which “all the precious jewels in Paris were taken out of the vaults.” Vogue was quick on her heels, dedicating a double-page spread to “Eastern splendor” and the “barbaric” nature of Cartier’s Indian-style jewels (“barbaric” because the gemstones were not cut in the smooth fashion that civilized American and European ladies were used to).

The following year, Daisy would go one step further, commissioning the Collier Hindou, perhaps the most spectacular example of Cartier’s Tutti Frutti style. Reconstructed from Fellowes’s own carved sapphires, emeralds, rubies, and diamonds, the necklace was unique both in terms of the sheer number of stones and for its ingeniously flexible design.

And, as with many jewels of the period, it was multipurpose: the central part of the necklace (formed from two large carved sapphire buds, diamond-studded emerald beads, carved ruby leaves, and navette diamonds) doubled as a removable clip brooch. In true allegiance to the Indian style, the Collier Hindou was designed to be secured around the neck with a black silk cord, but it did have one important difference from jewels made for Indian clients: Sapphires, rarely used in India because they were considered unlucky, appeared in abundance.

After Daisy Fellowes’s death, the necklace passed to her eldest daughter, the Comtesse de Castéja, who took it back to Cartier to be altered in 1963. The client’s own gemstones were used to form a fixed collar, and the two large sapphires that had previously constituted the central part of the necklace comprised the new clasp. 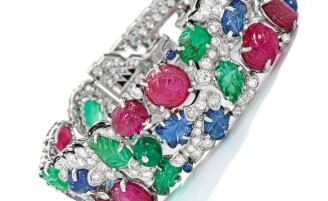 When the hammer came down at the Sotheby’s Geneva auction, a new record was set for an Art Deco jewel. The final price was $2,655,172.