A s the world continues to be enamoured with Gutai, the radical Japanese post-war avant-garde group that has achieved an extraordinary resurgence in the past decade, the accomplishments of its quieter, less conspicuous members are swiftly coming to light. Uemae Chiyu and Masanobu Masatoshi are two such artists. Compared to other first-generation Gutai members who favoured explosive, expressionist and performative action-painting works, Uemae and Masanobu’s dedication to the silent art of painting manifested in pioneering experiments that are receiving renewed critical attention.

Uemae’s Untitled from 1956, for example, exhibits the artist’s ground-breaking aesthetic of ishu or chumitsu – phrases that loosely describe the condition of thick or dense crowding (such as the density of hedgehog spines or growths of rice plants). Displaying a densely built-up all-over proliferation of short tight strokes of brilliant colour, the iridescent painting evinces an aesthetic that finds a lineage in artists such as Kusama Yayoi, Mark Tobey, Zoltan Kemeny, and Erro, etc., whose works are concerned with the aesthetics of accumulation. Uemae’s chumitsu works, however, which he began producing earlier than most of these artists, display a unique sensibility – one that is profoundly introspective, labour-intensive and ascetic, yet which brims with a rich incandescent presence reminiscent of pointillism or Vincent van Gogh’s paintings from his final years.

Blazing with a singular scorching intensity, Untitled dates back to 1956, rendering it one of Uemae’s earliest works. At the International Art of a New Era: Informel and Gutai exhibition in 1958, one of Uemae’s paintings were hung between works by Yves Klein and Jean-Paul Riopelle and later purchased by prominent British collector Anthony Denney. On another occasion, influential French critic Michel Tapie showered praise on Uemae’s pointillist paintings – a testament to their pioneering innovation and historical significance.

Masanobu was another dedicated first-generation Gutai artist who remained dedicated to painting throughout his life. Although his presence outside of Japan has been modest, owing to his less aggressive and dramatic methods, Masanobu was granted a solo exhibition at the Pinacotheca by Yoshihara in 1965 – an honour bestowed to only a select few Gutai members. His distinctive style is characterized by expansive all-over compositions comprising simple shapes that resemble clumps of yarn, hand-written scribbles or illegible exotic symbols, invoking an aesthetic of primitivism within the lineage of Cy Twombly’s scrawls.

Whilst Twombly’s works alluded to writing as a conceptual foundation, Masanobu’s works engage with the logic of concrete materiality that defines Gutai’s pivotal experiments in the 1950s and 1960s, evoking the pulse of physical matter. The dexterously executed symbol-esque scribbles converge to form enigmatic canvases with an aesthetic reminiscent of ancient pottery or the primitive elements of Japanese art, which unite sign and matter and reach towards the depths of the cosmos. Gutai leader Yoshihara Jiro praised the artist’s work, writing: “More than symbols, they seemed like properties that might emerge when the logical structure of the ground was magnified and reproduced”.

Executed in the 1961 in the heyday of Gutai, Work is humble in spirit yet quietly spectacular – an archetypal creation by the unassertive yet artistically pivotal artist. Masanobu is recently receiving revived international attention; in 2015, he was honoured with a large-scale retrospective at the Kochi Museum of Art which travelled to the Otani Memorial Art Museum in Nishinomiya City. The catalogue text reads: “[Masanobu] captures the very essence of eternal, limitless transformation – a world of unchanging, utter silence that hides this within itself”. 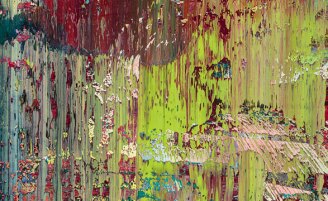