The Red-Hot Car that Belonged to Johnny Hallyday, “Elvis Presley of France”

Coming to auction this February for the first time, an ultra-rare Iso Grifo is made all the more covetable by hailing from the collection of French icon, Johnny Hallyday.

PARIS – Giotto Bizzarrini made his name as the designer of some of the most legendary Ferraris ever built, cars like the 250 SWB, 250 TR and the legendary 250 GTO. Departing Ferrari as part of the infamous ‘Palace Revolt’ in 1961, he found work with various Italian upstarts who shared a version of performance more similar to his own.

Bizzarrini worked closely with Renzo Rivolta’s ambitious Iso effort starting in 1962 and later became a constructor of note. At 1963’s Turin Auto Show, Iso debuted the Grifo in two forms: the A3/L as a luxurious GT, and the A3/C as a serious endurance racer. The latter was developed and built by Bizzarrini; as he told author Winston Goodfellow, ‘I started with the idea of Ferrari’s 250 GTO, and wanted to improve on it.’ Iso Grifo A3/Cs won their class at Le Mans in 1964 and 1965, while the road-going A3 Stradale had a quoted top speed of 171 mph in Autosport magazine’s 1964 road test.

Offered at the upcoming RM Sotheby’s: Paris auction (7 February, Paris) is one of these rare and very desirable ‘riveted’ A3/Cs, made by Carrozzeria Sports Cars of Piero Drogo in via Emilia Ovest in Modena, in front of the Autodromo di Modena. The bodies were made in ‘avional’ (duralumin), a special alloy of aluminum, copper and magnesium that is very light and elastic but very difficult to weld. Therefore, it needed to be riveted in a similar fashion to an airplane. This style of construction allowed the car to be exceptionally light, tipping the scales at 969 kg. Once the chassis and body were completed, Bizzarrini completed the cars at his small Autostar facility in Livorno.

It was sold to Paris resident Jean-Philippe Smet, who was better known as Johnny Hallyday. Dubbed ‘the Elvis Presley of France’ by The New York Times, Hallyday had 100-plus million record sales and appeared in more than 30 films, and was nothing short of a hero to many. Hallyday is pictured in and around the car, with Parisian temporary registration 7381 WW 75. On 27 October 1965, the car was registered as 4958 RZ 75, under ‘Mr Smet dit Johnny Hallyday, Jean Philippe, née le 15 juin 1943 à Paris 9è, et résident au 6 Place Winston Churchill, Neuilly sur Seine.’

Following Hallyday’s ownership, the Iso spent significant time in long term ownership, including 24 years in Prince Pierre Sangusko’s castle, and more than fifteen years in Michel Hommell’s Manoir de l’Automobile museum in Lohéac, France. It has since been displayed at the 2017 Chantilly Concours, where it garnered the ‘Special Award’ within the Great Musicians’ Cars class.

Today, these early ‘riveted’ Iso Grifo A3/Cs are highly coveted as only a handful did actually survive and seldom come to market. Chassis number B 0209 is especially appealing as it has always been in France, with unbroken provenance back to the first owner, one of France’s most beloved figures. As RM specialist Augustin Sabatié-Garat puts it “The offering of a riveted Iso Grifo A3/C is extraordinarily rare in its own right. Add to that its exceptional French provenance and former ownership by the late, and much loved, Johnny Hallyday, and you have a once-in-a-generation opportunity for collectors. We’re tremendously honoured to bring an important car owned by such a cherished French icon to public auction for the very first time.” 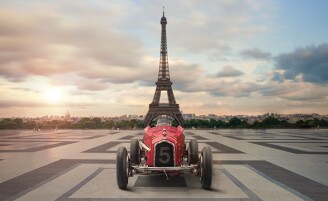