The Power of Banksy’s Art and Activism

This May, all eyes will be on Banksy for another reason – his 2005 work Love is in the Air will become the first physical artwork offered by an auction house for which cryptocurrency will be accepted as payment.


T oday, Banksy’s art is coveted by blue-chip collectors who regularly spend many millions on his work both at auction and privately. So it is perhaps easy to forget his humble beginnings as a street artist from Bristol who would venture out at night with little more than a few stencils and a spray can of paint. 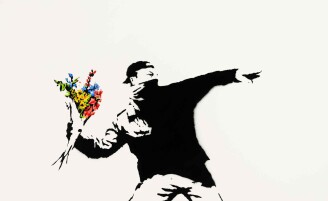 But, despite his enormous market success, activism and disruption are still at the heart of Banksy’s work. Take, for example, Love is in the Air (2005) (estimate $3,000,000–5,000,000). The image, of a masked man about to hurl a bouquet of flowers, is one of Banksy’s best known, and has been reproduced thousands of times in paintings, prints, on book covers and – much to Banksy’s annoyance – on unauthorised merchandise (the artist lost a trademark battle over the image last year). 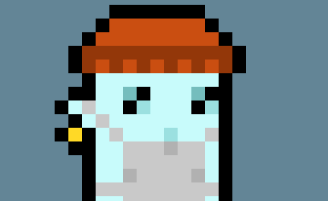 But, the origins of the work lie far outside the commercial arm of the art world.

Love is in the Air, also known as Flower Thrower, was first stencilled on the side of a garage near the West Bank barrier in 2003, a year after the wall was built. It was the first time Banksy visited Bethlehem, where he has returned to paint numerous times since, opening the Walled Off Hotel in 2017, bringing some much-needed tourism to a forgotten stretch of the Palestinian town.

Despite his enormous market success, activism and disruption are still at the heart of Banksy’s work.

In fact, Banksy has spent much of his career supporting refugees and displaced peoples. In 2015, he bypassed the structures of the art world to create his own anarchic theme park in a disused British Victorian seaside resort in Weston-Super-Mare.

After its five-week run, which pumped an estimated $28m into the local economy, Banksy donated wood and other structural elements from Dismaland to help build shelters in the refugee camp in Calais known as “the Jungle”. While there, the artist painted a mural of the late Steve Jobs, the founder of Apple and son of a Syrian migrant – a poignant reminder of the benefits of migration.

Banksy’s activism stepped up a gear in September 2020 when the refugee rescue boat he funded, named Louise Michel after the 19th-century French anarchist, set sail from Spain to patrol the Mediterranean and answer distress calls from those trying to reach Europe by sea. Within a week, the crew of activists had rescued more than 150 people off the coast of Libya, though the boat is currently blocked from leaving port due to EU restrictions.

In a video announcing the boat’s mission posted to his Instagram account, some of which was shot on board the Louise Michel, Banksy incorporated footage of the moment his Girl with Balloon painting was partially shredded during a live auction at Sotheby’s in October 2018.

Far from putting off collectors, Banksy’s straight-talking has earned him an even bigger following.

Scenes from the Sotheby’s auction cut away to people screaming as they struggle to stay afloat at sea. “Like most people who make it in the art world I bought a yacht to cruise the med,” Banksy says. “It’s a French navy vessel we converted into a lifeboat. Because EU authorities deliberately ignore distress calls from ‘non-Europeans’.”

Banksy made another powerful statement in support of the Black Lives Matter movement in June 2020, days after a “blackout” on social media prompted by police officer Derek Chauvin’s murder of George Floyd on a Minnesota street. Alongside a panting of the American flag catching fire from a vigil candle next to a framed portrait of a black silhouette, Banksy posted an uncompromising text.

It read: “People of colour are being failed by the system. The white system. Like a broken pipe flooding the apartment of the people living downstairs. The faulty system is making their life a misery, but it’s not their job to fix it. They can’t, no one will let them in the apartment upstairs.

“This is a white problem. And if white people don’t fix it, someone will have to come upstairs and kick the door in.”

Far from putting off collectors, Banksy’s straight-talking has earned him an even bigger following, even when the market is the subject of his mockery; this was the case with the shredded Girl with Balloon, which quintupled its estimate and was subsequently retitled Love is in the Bin. Another anti-establishment work, Devolved Parliament, depicting MPs as bickering chimpanzees, sold for a then record $12.1m in 2019.

In an art market that at times can be without conscience, such ambitious activist projects can only be applauded.