The Genius of François-Paul Journe

By Sotheby's
F rançois-Paul Journe is considered a technical genius in the field of watch making, and as the only three-time winner of the Aiguille d'Or grand prize, he quickly rose to fame in the competitive watch industry. With only 21 short years since the founding of his independent watchmaking brand F.P. Journe, collectors had started noticing the numbers of phase lifts among its collection.

Launched in 1999, the Tourbillon Souverain d'Egalité marked the first use of a constant force remontoire in a wristwatch. The historic remontoire mechanism regulates the uneven force delivered by the mainspring, transfers power between the mainspring and escapement. It married a near-forgotten vestige of antique pocket-watches with the latest technology, defining the F.P. Journe approach. The genius is in the combination of the remontoire with the tourbillon, that takes to the horological tradition of complicated modern wristwatches to its height.

Although the Tourbillon Souverain has been in F.P. Journe’s production for 21 years, only the ones that were produced from 1999 to 2003 were classified as the D’Egalit model. Those that were produced afterward were called Avec Seconde Morte, as they include a fascinating deadbeat seconds function. Undoubtedly the Tourbillon Sourverain will capture the heart of any discerning collector, as the timepiece is a very important part of F.P. Journe’s heritage. It showcases the watchmaker’s fluency in classicism as well as his innovative technical feats. 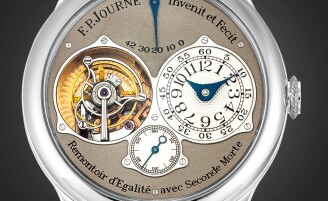