The Ford GT: A Modern Iteration of a Le Mans Legend

By Andrew Miterko
RM Sotheby’s is delighted to offer a rare opportunity to own a virtually new example of the modern supercar which pays homage to the legendary race cars of the mid 1960s.

T he Ford GT40 introduced America to Le Mans when Henry Ford II set his sights to defeat Ferrari in competition and redefine Ford’s image as a performance brand. Development began in October 1963 with the plan of testing for Le Mans 1964 and taking the first GT40 to victory in 1965. The first prototype set a top time at Le Mans, but failed to finish any race of the season. Its first victory came in 1965 at Daytona, but it was evident to the engineers that the 289 cu in V-8 engine was insufficient to be the dominating force that Henry Ford II had envisioned. Engineers returned to the drawing board and with cost being no object, the Mark II featured a powerful 427 cu in V-8 shoehorned into the chassis, which lead to Ford taking first, second, and third place on the podium at Le Mans over the Ferrari P-3s. 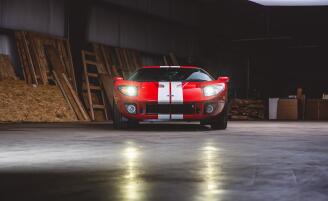 In 2005, Ford introduced the Ford GT to pay homage to the legendary GT40s which brought Ford to victory at Le Mans four decades earlier. Detroit’s rear-engined, rear wheel drive production supercar followed the GT40’s distinctive styling and boasted incredible performance to match which rivaled Germany’s highest performing supercars offered at the same time. Since its release the Ford GT has been highly sought after by discerning collectors, and commands a considerable premium to this day, notably it is one of the few modern cars to actually never have dropped in value below the original selling price.

RM Sotheby’s is proud to offer the rare opportunity to own a virtually as-new example of this venerable supercar with only 11 miles on the odometer, one of only 327 finished in Red with white stripes and configured with all four options offered from the manufacturer. Below, explore the details of the 2006 Ford GT.

A 5.4 liter, dual overhead cam V-8 resides right behind the cabin, and features a Lysholm twin-screw supercharger rated to 550 horsepower and 500 foot pounds of torque. The immensely powerful engine allows the Ford GT to rocket to 60 mph in only 3.3 seconds and to a 205 mph top speed.

At a glance, the GT’s styling harkens back to the Le Mans winning GT40s of the mid-1960s. Dual vents in the nose to draw air through the radiators are framed by modern interpretations of the GT40s covered headlamps, and lead the eye toward the aggressive rear haunches and integrated spoiler at the short tail of the vehicle. Through a glass window at the clamshell the Lysholm supercharger is visible.

Aluminum body panels are laid over an aluminum space frame chassis for light weight and rigidity, resulting in maximal power to weight ratio and superb handling and responsiveness.