O ften referred to as “The Father of Space Art,” Chesley Bonestell is undergoing a surge in popularity. Prized by collectors and institutions alike (including the National Collection of Fine Arts and the National Air & Space Museum) his work has been published in countless books and magazines, viewed by thousands on the silver screen and fuelled the imaginations of numerous artists, scientists and dreamers. Bonestell’s fantasies about worlds beyond became our reality, with much of the American space program being modelled after his designs. His impact was – and continues to be – far-reaching. Just a few of his numerous honours include a place in the International Space Hall of Fame, a bronze medal awarded by the British International Society, induction into the Science Fiction Hall of fame (the first inclusion of a non-literary contributor) and both a crater on Mars and an asteroid named for him. His influence spans well beyond the early era of space exploration; the first ever album of Sun Ra vocal tracks, released in 2016, features sleeve art by Bonestell.

While San Francisco native Bonestell is best known for his Space Art, his career began in architecture, and many iconic United States landmarks came to life from his designs, including the Art Deco façade and eagles of New York City's Chrysler building, the Supreme Court building in Washington, DC, the New York Central building and San Francisco's Golden Gate Bridge. The Golden Gate Bridge featured many times in Bonestell's work, and he first prepared illustrations of it in 1932 for Joseph Strauss, the chief engineer on the design for the bridge.

Starting in 1937, Bonestell began work for the forthcoming 1939 Golden Gate International Exposition, timed to coincide with the opening of the Golden Gate Bridge. He designed the cover for the event program, and did numerous paintings for the project, including aerial views of the island, and renderings of the landscaping and architecture. In the below painting, Bonestell depicts San Francisco's north shore as seen from just south of Sausalito, with the Golden Gate Bridge, the Presidio, the dome of the Palace of Fine Arts and part of the Marina district in the background, and Horseshoe Bay, Point Cavallo, Yellow Bluff and an apparently no-longer extant harbour just south of Sausalito in foreground.

While Bonestell actually executed his first space painting in 1905 after seeing Saturn through the telescope at the Lick Observatory (a painting that was soon thereafter destroyed in the 1906 San Francisco earthquake and fire), it wasn’t until the early 1940s that he took up the subject of space seriously. Once he did, his work allowed generations of dreamers and would-be space explorers to visit other worlds without ever having to leave the comfort of their homes. Bonestell's paintings electrified a generation of teenage space enthusiasts: aspiring writers, astronomers, physicists, artists and engineers. The late Carl Sagan said he didn't know what other worlds looked like until he saw Bonestell's paintings of the Solar System. Joseph Chamberlain, director of the Adler Planetarium, maintained that, "It might even be suggested that without Bonestell and his early space age artistry, the NASA era might have been delayed for many years, or it might not have happened at all."

Chesley is the original – he's been there ahead of them all. Neil Armstrong? Well, Tranquility Base was established over Bonestell's tracks and discarded squeezed-out paint tubes. The man not only moves across space, but also across time. He was present at our world's birth and has also set up his easel to paint its death...”

The below painting is an excellent example of how Bonestell brought others worlds to us. Done for Willy Ley and Wernher von Braun’s epic 1956 non-fiction work The Exploration of Mars, it epitomized the precise technique that Bonestell had become known for: "Bonestell's work represented a quantum leap in the quality of space art. By combining his experience as an architectural renderer (for the knowledge of perspective and light and shadow) with his experience as a Hollywood special effects matte painter (for realistic painting techniques), Bonestell was able to bring a sense of reality to space art that set a standard that is still admired today" (Hartmann, Bradbury, Sokolov, Miller et al, In the Stream of Stars, p 31). Bonestell’s concerns with the accuracy of his work often continued well after its completion. On the back of the below painting, Bonestell added a note a full 30 years later: "In 1985 I realized that the columns should be 1¾ times thicker (measure closest col. at base) than they are in the ptg."

Bonestell would frequently add his own notes to the back of his works, as he did for the below magnificent four-piece panoramic work: "Sketch for Griffith Observatory, L.A. 360° projected around the dome. Mid-1950's. Saturn, viewed from Titan, one of its satellites (Titan is 3,000 diam., 750,000 mi distant from Saturn). Painted by Chesley Bonestell."

Bonestell's Saturn as Seen from Titan, widely referred to as "the painting that launched a thousand careers," is probably the single most famous astronomical painting ever created. While Bonestell created hundreds of astronomical paintings in his lifetime, his 1944 Saturn as Seen from Titan was his favourite. It was his first published space painting, running in the May 29, 1944 issue of Life magazine, and it would launch an era in which his work would ignite countless imaginations; Bonestell's fantastic depictions of worlds beyond would grace numerous issues of magazines such as Life, Collier's, Scientific American, Fantasy & Science Fiction, Coronet and Pic, as well as Willy Ley's 1949 The Conquest of Space and Von Braun & Ley's The Exploration of Mars, amongst many others. Bonestell gave the first version of Saturn, Viewed from Titan to Willy Ley, and it is now a part of the Bonestell Collection at the Adler Planetarium in Chicago. He would go on to create six other versions of this painting, including a version that he presented as a gift to his daughter, and the 360° panorama created for the planetarium of the Griffith Observatory in Los Angeles (memorialized in the 1955 film Rebel Without a Cause, starring James Dean).

Bonestell’s work took on a whole new dimension when, at the age of fifty, he moved to Los Angeles, where he was to become the highest paid special effects artist in Hollywood (though his work went largely uncredited). The Hunchback of Notre Dame (1939), Citizen Kane (1941), The Magnificent Ambersons (1942), The War of the Worlds (1953) and the series Men Into Space were amongst the numerous projects to receive their distinctive looks from Bonestell's brush and pen. The buildings designed by Ayn Rand's architect superhero Howard Roark in the 1949 film The Fountainhead were done by Bonestell as well.

The sleek direct ascent rocket below, with its clean, curved lines was a favourite theme of Bonestell's, and he would use it time and again. Executed a decade before a manned space craft was to land on the moon, the direct ascent rocket depicted is one of the methods initially considered by the United States for the Apollo lunar landings, as well as by the Soviets. The US eventually jettisoned the design in favour of the Lunar Orbit Rendezvous method (LOR), as direct ascent would have required an enormous launch vehicle, like the rocket depicted here.

Bonestell’s special effects work in Hollywood would have a huge influence on his space art, and the below work was executed using his frequent technique of painting over photographs that he had shuttered himself, a technique he first began using in his special effects work in the early 1940s. Based on the “Picture of the Century,” an oblique photograph taken by Lunar Orbiter II, this popular scene was first published as the inside front cover illustration for the October 1969 issue of Magazine of Fantasy and Science Fiction, with the caption "Russian astronauts have arrived on the rim of Copernicus only to discover the Americans have already been there..." It subsequently appeared in the April 1978 issue of Future Life magazine, Ron Miller's Space Art in 1978, the July 1979 issue of Sky and Telescope magazine, and Fred Durant and Ron Miller's 1983 work, Worlds Beyond. Looking very closely at the lower right hand portion of the work, one can see a Russian Cosmonaut pointing to the area just below Bonestell's signature at a small pile of trash, presumably left there by the American astronauts who had arrived before them.

AN ALTERNATE VERSION OF BONESTELL’S POPULAR "EXPLORING COPERNICUS", DONE CA 1967,WITH THE COSMONAUTS’ SPACESUITS IN RED RATHER THAN GREEN. SOLD FOR $43,750 IN SOTHEBY’S JULY 2017 SPACE EXPLORATION SALE.

A tireless, visionary artist until the very end, Bonestell died in Carmel California in 1986, with an unfinished painting on his easel. 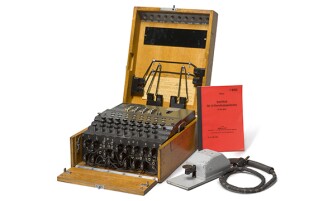