The Drama of Rubens

The Flemish painter’s experiences and skills made for work that spectacularly united the best of northern and southern European techniques.


I n the 17th century, members of the French Royal Academy split into either Poussinistes, preferring the ordered works of Nicolas Poussin, or Rubénistes, lovers of Peter Paul Rubens’s richly hued forms. The old debate was back: line versus colour, Classicism or naturalism, Raphael or Titian. The bold among them chose Rubens.


Born in 1577, in Siegen, Germany, Rubens received an exceptional education compared to other painters of his day. He spoke multiple languages, among them Latin and Italian, and his command of literature, philosophy, mythology and theology helped him execute grand historical and mythological scenes in exciting new ways. His early training in the Antwerp studio of Otto van Veen inspired him to see the masters of the Italian Renaissance for himself. 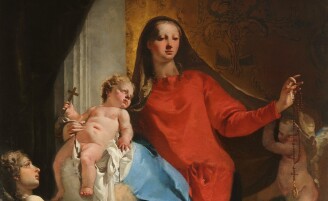 When he returned to Antwerp, in 1609, after eight formative years in Rome and Mantua, the young artist received a royal welcome. His portraits for Archduke Albert and Infanta Isabella landed him the esteemed appointment as their court painter. He married the daughter of a noted humanist, set up a thriving studio, welcomed scores of eager students, and embarked on a professional life that would soon be characterised by tremendous success and constant patronage. “It was the sweet spot in Rubens’s career,” says Sotheby’s Otto Naumann, “when he was clearly trying to impress his countrymen with his forceful, Italian painting style.”

“It was the sweet spot in Rubens’s career,” says Sotheby’s Otto Naumann, “when he was clearly trying to impress his countrymen with his forceful, Italian painting style.”

What distinguished Rubens was his “ability to re-interpret important models he encountered both on the Italian peninsula and in the Low Countries through his own developing sense for vibrant, naturalistic colour and his virtuoso brushwork”, says Dr Kirk Nickel, co-curator of Early Rubens, now at the Art Gallery of Ontario. The exhibition marks a big year for the Baroque, with Rubens, Van Dyck and the Splendour of Flemish Paintings at the Museum of Fine Arts, Budapest, From Titian to Rubens. Masterpieces from Antwerp and other Flemish Collections (proudly sponsored by Sotheby’s), and From Bernini to Rubens. Roman Baroque from the Rossacher Collection at DomQuartier Salzburg all currently on view.

Eager to make his mark, Rubens painted powerful canvases like Raising of the Cross, 1610–11, and The Massacre of the Innocents, circa 1611–12. “He’s so good at capturing the climax of the story,” says the Art Gallery of Ontario’s Gillian McIntyre. The museum’s exhibition also presents more tender treatments, with two versions of The Holy Family with St Elizabeth, St John, and a Dove, circa 1609. Another early rendition of this scene, the recently rediscovered The Virgin and Christ Child with Saints Elizabeth and John the Baptist, will appear at auction for the first time in over 70 years in January. An intimate picture of the Christ child imbued with the fleshy heft typical of Rubens, it presents the common Italian theme in decidedly Flemish terms, haunted by the dark clouds and an innocent lamb that remind us of Christ’s momentous destiny.