By Forest Casey
RM’s upcoming Online Only auction offers an opportunity to bid on exclusive supercars and even hypercars, all of which rarely appear in an online auction format.

T he story of supercars is a tale of technological development throughout time. What makes a car “super” is, naturally, debatable – some supercars are mid-engined, track-focused weapons. Others are more luxurious. The distinction between “supercars“ and “hypercars” can get even more fuzzy. But every automotive aficionado can agree on this: Supercars and hypercars are exclusive by their nature.

What makes RM’s upcoming Online Only sale in Palm Beach so exciting? Some of these supercars and hypercars have never before been offered in an entirely online setting, giving everyone in the world an opportunity to take home one of these exceptional examples without having to already own one or endure a multi-year wait list. 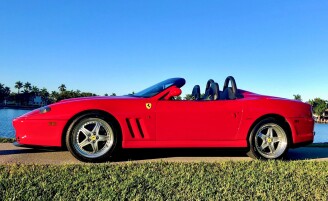 Patience may be a virtue, but it’s also not very fun. Might as well begin our showdown with the main event: a heavyweight bout between two apex hypercars – a 2017 Ferrari LaFerrari Aperta and a 2019 McLaren Senna. What sets the Senna and Aperta apart from the other options at the lower end of the lineup for McLaren and Ferrari is a bespoke focus. The hypercar buyer is an elevated customer. When one commutes in a supercar, it leaves garage space for something even more special—something to take to a track day or out for a weekend cruise down to St. Tropez. Ideally, your new hypercar could do both.

Aperta is a scientific name for a classification of spider, hinting at the convertible nature of the ultimate edition of Ferrari’s namesake hypercar. All 210 LaFerrari Aperta examples were delivered with both foldable canvas and removable carbon-fiber targa-style roofs, offering owners a choice in seeing vs. being seen. The McLaren Senna, in contrast, was never offered in an open-air configuration, but with the optional in-door windows and twin skylights surrounding a central carbon-fiber spine, the Senna provides its passengers with the best of both worlds at once.

Aside from the open top, the signature feature of the Aperta is its advanced hybrid power train, with a KERS system that captures power typically lost during braking to boost the Ferrari’s already potent 800-horsepower V-12 engine up to a staggering 950 horsepower. Unlike typical hybrid power trains, Ferrari’s system was designed specifically to optimize performance, with electric power providing immediate acceleration off the line until the Aperta’s variable intake engine takes over, screaming to a maximum of 9,250 rpm. The Aperta offered at RM’s Online Only sale wears optional Giallo Triplo Strato paint, matching the yellow carbon brakes and interior appointments, including twin prancing horses stitched on the headrests of the Aperta’s black leather seats.

Unlike McLaren’s other hypercar, the P1, the Senna purposefully skipped the hybrid power train in favor of an all-out diet. McLaren stated the dry weight as 2,641 lb – lighter than a Toyota GT-86, but packing 789 horsepower, showing the difference between a lightweight, track-focused sports car and a true hypercar. Of course, the Senna also features the same adaptive hydraulic damper setup shared with the rest of McLaren’s Ultimate Series, giving owners the choice of a Rolls-Royce–like “Comfort” setting or a firmer setup for flat cornering. After all, a hypercar owner should be able to enjoy two cars in one, although a genuine hypercar buyer would probably prefer both a Senna and an Aperta in their garage. With only 175 miles on the Aperta’s odometer and barely over 200 on the Senna’s, the choice is yours.

However, not every buyer is in the market for a hypercar. The pair of turn-of-the-century supercars dueling above served as halo vehicles for both of their respective brands. The early 2000s brought new peaks in performance, paired with a newfound refinement previously unfound in cutting-edge supercars. But the age of the analog supercar was not over yet. For many enthusiasts, the finest hour for the manual-transmission, mid-engined supercar came near its final hour – at the dawn of the 21st century, Porsche compiled all their accumulated engineering knowledge and materials science experience into one spectacular halo car, the Carrera GT.

The centerpiece of the Carrera GT’s futuristic cabin was a multi-layered birch-and-ash wood shift knob, a nod to Porsche’s victorious 917 race cars, which sported lightweight, heat-resistant shifters made of layered balsa wood. It wasn’t just the knob, though – the GT’s low-inertia clutch was lightweight and designed for lightning-quick, race-style engine revs. There was no automatic transmission option. The Carrera GT’s carbon-fiber monocoque chassis was shared with the 24 Hours of Le Mans endurance race-winning 996 GT1; its motorsport-derived front-and-rear pushrod suspension ensured the pinnacle Porsche would come with ultimate handling. Any assertions that the GT was somehow less super because of its open cabin can be immediately assuaged by the torsional rigidity figures, which show the Carrera GT – with its carbon chassis and bodywork – is as stiff as a period Porsche 911 RSR race car with a cage.

Ford celebrated its centennial with a refreshed version of their famous GT40 race car, available starting in 2005. With a fully modernized design, the second-generation Ford GT quickly became a cult favorite for those who wanted the feeling of a mid-engined supercar without a prancing horse or bull on the badge. This 2006 Ford GT was ordered as a “three-option” example and has since been upgraded with a fourth: the McIntosh radio. Offered with a relatively rare color scheme (only 327 cars were painted similarly for the 2006 model year), this Ford GT also avoided the front suspension issues that appeared in the first batch of 2005 models.

Nine Ferrari supercars will be offered during RM’s Online Only auction (and one adorable, pint-sized Ferrari Junior), so there is truly a supercar for everyone. But we would be remiss if we did not highlight a very special example, the 2001 Ferrari 550 Barchetta Pininfarina. Ferrari planned to build 444 of this open-top, front-engined masterpiece to reflect the power output of the 550’s V-12 motor, but tetraphobia in several markets inspired them to build four additional examples, bringing total production up to 448 – making this manual-transmission Ferrari twice as rare as an F40. Barchetta in Italian means “little boat,” a nod towards Ferrari’s signature sports cars from the 1950s, and evokes thoughts of oceanside cruising on a sunny evening, with the Barchetta’s temporary rain-protecting top purposefully left at home. 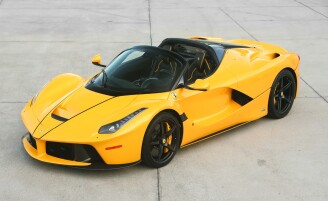 We dream of supercars and hypercars alike because of moments like this. Whether you’d rather take home a Senna or an Aperta (or both), don’t miss your opportunity to register to bid on these exceptional examples – RM’s Online Only Palm Beach auction begins 20 March.