Summoning the Divine: Oceanic Treasures in the Heart of Brooklyn Heights

By Marla Yost
An enigmatic slit drum mesmerizes in a mid-century designed house, endowing the sleek space with primal energy. Carved from a log of breadfruit wood to capture the likeness of an ancestral spirit, and accompanied by carved shields and feathered masks, it strikes an otherworldly presence amidst the home’s modern artwork and mid-century furniture as easily as it could be exhibited at The Met . The Oceanic collection of Ronald and Hortense Clyne was just one of the surprises we discovered on this quiet block in Brooklyn Heights.

T he late Ronald Clyne certainly led a life less ordinary. A gifted graphic artist whose work has been shown at MoMA and The Smithsonian, he demonstrated artistic talent at an early age in Chicago, selling his first illustration at the age of 15. When his family moved to Beverly Hills, the high schooler immersed himself in the fanzine world, contributing his talents to numerous book jackets for fantasy and sci-fi works through publishers such as Arkham House.

His career turned towards graphic design when Moses Asch of NYC’s Folkways Records reached out to him to create cover albums. Ronald gladly accepted the assignments as Asch gave him full artistic license only constrained by the company’s limited budget. To accommodate the diverse categories represented by Folkways, Ronald acted as his own art director, pulling together calligraphy, topography and photos from the public domain. He theorized that these record covers should be seen in a total glance, exercising his instinct for commercial branding. Using only monotone or two-tone colors, he gravitated towards earthy, autumnal shades which resonated with the lo-fi recordings, and his work quickly became the stamp of Folkways Records.

Moses Asch developed Folkways with the mission to document sounds and preserve the essence of vanishing cultures for future generations. Avoiding the temptation to cash in on star-studded orchestral hitmakers, Folkways focused on musicians that bigger record labels deemed unmarketable. A decade before the ’60s folk wave, it discovered and distributed the works of Lead Belly, Pete Seeger, Woody Guthrie, and Ola Belle Reed, among others, sending the authentic sound of American folksongs to living rooms across the country.

Expanding beyond folk music, Folkways included spoken word (Allen Ginsberg, W.E.B. Du Bois), classical, indigenous sounds from Africa and the Pacific Islands, and even an album devoted to the sounds of tree frogs. Ronald was an ideal partner in conveying the look of each record, as his own interest in world cultures imbued his cover albums with a sense of authenticity and respect, refusing to exoticize cultures that Western civilization might view as “primitive.”

When Ronald and Hortense moved to Brooklyn in 1965, they collaborated with Joseph and Mary Merz of Merz Architects to build a home in the mid-century modern style. The Merzs were local heroes who fought for the historic preservation of Willowtown, an area of Brooklyn Heights which boasted pre-Civil War architecture with magnificent Greek Revival colonnades. Two of the lots were empty from previous teardowns, and the Merzs ensured that only the best of contemporary architecture would stand in their place.

The discreet mid-century exterior belied the three roomy, loft-like floors inside, providing an open space suitable to display the Clynes’ collection. Featuring gleaming pale wood floors and white walls, the house showcased the Oceanic art amidst modern works by John Loveless and Power Boothe, and classic mid-century furniture, including black leather sofas by Jørgen Kastholm and Preben Fabricius and a glass-topped, chrome-plated coffee table by Poul Kjærholm. The work from vastly different cultures informed each other, with the straight lines and polish of the mid-century style offsetting the organic, curvilinear shapes of the Oceanic.

The Clynes’ collection spans from the Vanuatu to East Sepik River regions. Located northeast of Australia, Oceania includes Vanuatu, Solomon Islands and New Guinea, where people settled between 30,000 to 60,000 years ago. It covers a third of our planet, harboring more than 1,800 languages and cultures (about a quarter on Earth) and is largely isolated from the modern world. They created their artwork as a way of channeling the gods during the villages’ initiation ceremonies, dances and funerals.

Relics like the slit drum were believed to access ancestral voices whose sonorous tones could be heard for miles when beaten with wood batons. Many carvings such as shields, masks and commemorative posts resided only in male ceremonial houses forbidden to women and the uninitiated. Sourced from their natural environment using wood, plants, feathers and bone, the majority of extant work goes back only to the 19th and 20th centuries due to the perishable materials. In some cases, the artwork was burned when Western colonialism prompted the inhabitants to convert to Christianity.

Reflecting upon his life’s journey, Ronald noted in one of his final interviews:

“Mo Asch told me he never laughed at anyone else’s culture. Boy, did I appreciate that.”

Having taken the road less traveled, Ronald’s work was inspired by the progressive philosophy of Folkways as well as the spiritual Oceanic art which graced his home.

While The Smithsonian acquired Folkways Records in 1986, containing Ronald’s 500+ cover albums, the Clyne estate has been curated on Sotheby’s Home. Discover more about this one-of-a-kind collection as well as the mid-century furniture and modern works of art—some created by the artist himself. 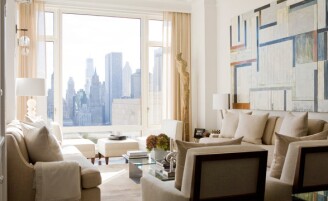