Stijn Huijts on Life at the Bonnefanten Museum

By Nina Siegal
The Vision Series explores great ideas in museum leadership, through candid conversations with founders, directors, and curators from around the world. Each month, Sotheby's Museum Network profiles a visionary who is rethinking the role of museums in the 21st century and going beyond the walls of the institution to connect with audiences in groundbreaking ways.

I t wouldn’t be unusual to mistake Stijn Huijts, the director of the Bonnefanten Museum in Maastricht, with his floppy mop of gray hair and slim-cut black jeans, for an aging rock star. In fact, he is both a museum leader and a guitarist, who still performs occasionally with the rock band he cofounded in the early 1980s, the Rick Nolov Band. Huijts is self-taught as a musician, but was educated as a sculptor and curator.

Working as an artist and touring with his band as a young man were both formative for his sense of taste, he feels. It’s part of the reason that he appreciates groundbreaking contemporary artists from a variety of different cultural backgrounds, who work across disciplines. “I’m fascinated by crossover practices,” says Huijts. “At least, I think it’s beautiful there are not these strict borders between endeavors, and you accept that art is something fluid, that can be many things.” 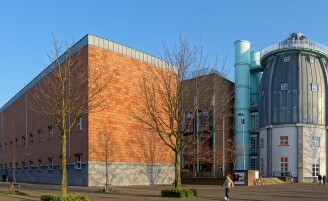 Take, for example, the museum’s current blockbuster retrospective of the American artist and filmmaker David Lynch, who is known for his television series and movies, but who started as a painter. “You can say that David Lynch is a very early example of a multidisciplinary artist,” he says. “Coincidentally, he began using the moving image as a part of his work as an artist. But first and foremost he has been a painter, who kept up a studio practice throughout his career.”

Huijts became the artistic director of the Bonnefanten Museum in 2012, after working for a couple of decades at smaller arts venues in what’s known as the Meuse–Rhine Euroregion. Starting in 2007, he had been director of SCHUNCK* in Heerlen, a multidisciplinary arts centre known for its youthful contemporary art programming, and before that he’d been director of the cultural centre De Domijnen for 12 years.

In taking over the Bonnefanten Museum, he succeeded Alexander van Grevenstein, who had been director for a quarter of a century. Van Gravenstein, who had previously worked at the Stedelijk Museum in Amsterdam, was credited with helping to grow the Bonnefanten Museum, at the time best known for its collection of Dutch, Flemish and German Old Masters, into a serious player in the realm of contemporary art, facilitating significant acquisitions, opening its current landmark building in 1995 and cultivating important relationships with private collectors.

Huijts has carried that mission forward with exhibitions that step outside the traditional Western art-historical approach. “What I like to show is the secret canon of art,” he says, “or artists that have not yet been brought to a stage in other places. Or to show artists that we know, but in a medium that they’re less well known for.”

In addition to surprising exhibitions, the museum also promotes diversification with its bi-annual Bonnefanten Award for Contemporary Art (BACA). Every two years since 2000, the Bonnefanten has granted a prize of €50,000, a solo exhibition and accompanying catalogue, to a living artist. Since Huijts came in, he has made sure that the prize goes to a non-Western artist, selected by a jury made up of specialists from their region. This year, the winner is Marwan Rechmaoui, a Lebanese artist whose work has an archeologically conceptual approach, exploring how the history of any place is revealed through the fabric of its contemporary urban life.

Using a jury, Huijts says, “is a great way to expand your network with regard to artists and practices that we are not very familiar with. Apart from the winner, you will learn about at least 14 other very high-quality artists who are brought to the table by the jury. It’s a really sustainable way to develop an international network and programme for the museum, especially in the non-European world that we want to make our audience familiar with.”

Located along the scenic Maas River on the Avenue Céramique – a site known from the 19th century until the 1970s for its ceramics factories – the Bonnefanten Museum, founded in 1884, is currently housed in a modern brick complex with a rocket-ship shaped silver cupola at its centre, designed by the Italian architect Aldo Rossi.

Today it serves about 135,000 visitors a year, with a quarter coming from in and around Maastricht and the rest from abroad. Because it is located about 10 minutes by car from the city’s convention center, where the annual TEFAF Maastricht art fair takes place every March, its visitor numbers are boosted by international guests each year.

“We do position ourselves internationally,” says Huijts, “based on our Old Masters collection and our contemporary projects. Our interest is to create connections between the local and the global dynamics in art.”

With an annual budget of €7 million, it’s larger than a mid-sized museum, but not a major institution. “There’s a Dutch expression that you are too big for the napkin and too small for the tablecloth,” says Huijts with a smile. “We’re heading towards the tablecloth but we need a little more help to get there.”

Currently, 60% of the museum’s funding comes from provincial government subsidies and the rest from earned income, such as ticket sales and sponsorships. A year ago, Huijts launched the museum’s very first endowment fund, and he wants to hire a fundraising professional too. “Development still hasn’t really been explored in the Netherlands,” he says.

He sees the greatest potential for growing the museum through attracting new and particularly younger visitors. To that end, the museum has set up a pop-up museum at the Pinkpop music festival in nearby Landgraaf. Anyone with a Pinkpop armband can visit the Bonnefanten Museum for free.

This summer, the pop-up space will feature select photographs by The Police guitarist Andy Summers, while the museum presents a larger retrospective of his works from 1980 to 2017 entitled A Certain Strangeness.

This kind of collaboration is particularly close to Huijts’s heart – the Rick Nolov Band played Pinkpop in 1984.