I n 1973, when George Lucas was trying to get The Star Wars backed by 20th Century Fox, he decided to waive the offered $500,000 contract salary and instead only be paid $150,000, stipulating he wanted to keep the merchandising rights to his film and any sequels if it was successful.

One must wonder if he was born with the foresight attributed to his greatest creation, the Jedi, because, whilst it was a big gamble, it was one that has paid off to the tune of $5.4 billion in the ensuing 35 years.

Yet his epic tale of a small rebellion against an oppressive intergalactic Empire seems like it could’ve been made with toys and merchandise in mind. Starships, smugglers, good guys versus evil forces, and planet-destroying weapons — the scope for weird and wonderful beings and vehicles was limitless.

And for some reason Star Wars toys, much like the films, hold a special place in our hearts. Whether you were bought them for birthday or Christmas presents or have inherited them from older siblings, you will have possessed at least one plastic action figure. Maybe not Luke, Leia, Han or Chewie, but more likely a war-torn Stormtrooper with one leg, the other having been lost in the ‘Battle for the Back Garden’.

All the while favourites of children all over the world, these figures also became sought after items of popular culture. Collectible, due to their limited number and the disposable nature of toys over the last century, it is unlikely that toys that were used, played with — and loved —would last very long, therefore unopened toys are the rarest, and gain the most value.

Yet Star Wars memorabilia goes way beyond just toys, and has become almost art-like in its own way with original concept art, decals, and posters becoming increasingly valuable commodities.

For example, a highlight of the auction is Bring Me The Head of Darth Vader, presenting the head of arguably the most iconic character on a plate, sculpted by British pop artist Clive Barker. It is a piece that both lampoons classical art (Salome and John the Baptist) and elevates the Star Wars mythos to an elite audience outside of which the story seems to belong.

The posters and artwork in the auction show how truly global the franchise is, including imagery from the US, Japan and Russia, and reinforces the enduring appeal. The latest installment, The Rise of Skywalker is expected to bring yet more accolades, and of course, offers the opportunity for many toys, posters, and games for a new generation of fans, as well as the lifelong aficionados who have keenly followed the franchise in to their adult lives.

The Star Wars universe now goes beyond the films, the books, and the merchandise, it is now part of our global awareness, deep in our shared cultures — that of the force, the dark side, and the saga of Skywalker. For collectors eager to acquire their own piece of the Lucas legacy, there are a number of boxed figures offered in the sale – and these represent a great opportunity to add to a burgeoning or established collection. The historic character and costume elements perfectly capture the original charm of the early films and production design.

George Lucas and the executives at Kenner (where the toys were produced), altered our idea of the film franchise and as such, objects considered collectible, so that most films and tv shows for kids have alongside them an endless array of figures and merchandise. They created a global phenomenon in more ways than one. 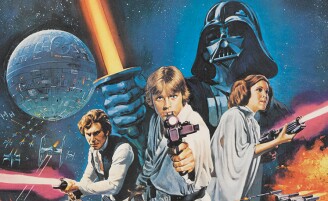