A Giacometti biopic makes its theatrical release in the US this weekend, plus a look back at memorable Giacometti moments at Sotheby’s.

The Final Portrait,  a Sony Pictures Classics release written and directed by Stanley Tucci, tells the turbulent true story of friendship and artistic turmoil behind Swiss artist Alberto Giacometti’s last portrait. Set in Paris in 1964, the rough-around-the-edges Giacometti, played by a transformed Geoffrey Rush, invites his friend the American writer James Lord (Call Me By Your Name’s Armie Hammer) to sit for a portrait, insisting it will take only a few days. Accepting the invitation, the intrigued Lord arrives at Giacometti's ramshackle Parisian studio where he is forebodingly greeted by the artist's wife Annette as her husband’s, “next victim."

What unfolds is a telling exploration of the chaotic creative process as Giacometti struggles to complete the portrait, wrestling his self-doubt and exasperation, while his odd-couple friendship with the refined Lord deepens. The Final Portrait captures the artist’s brilliance as both a blessing and a curse and conveys the utter devotion Giacometti brought to each of his creations.

Regarded as one of the most significant artists of the 20th century, Giacometti is best known for his distinctive sculptures of elongated human figures that defy easy categorization. Sotheby’s holds two of the top three record prices for his work at auction including Chariot (1950), which achieved $101 million and L’Homme Qui Marche I (1960), which brought $65 million. His works are included in many museum collections including the Fondation Beyeler, Basel, the Hirshhorn Museum and Sculpture Garden, Washington D.C., and the J. Paul Getty Museum at the Getty Center, Los Angeles.

Revisiting Alberto Giacometti in His Own Words 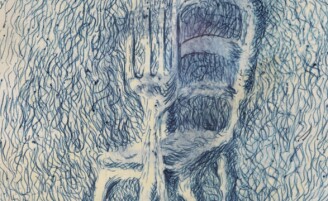