T he first automobile races were organized on the beaches of Daytona, Florida as early as 1902 and were later run partly on the beach and partly along the oceanfront roadway, until 1959, when the Daytona International Speedway was opened. This celebrated track remains home of the Daytona 500 – the most prestigious race in NASCAR.

Long synonymous with sport and racing, Rolex has been producing well-crafted sports timepieces that withstand the elements thanks to their patented Oyster cases since 1933. In 1955 Rolex launched their first Oyster Chronograph with Reference 6234. The first Cosmograph Daytona would not be seen until 1963, an early example of which, featuring a beautifully preserved nuanced dial, is one of the highlights of the Watches Online auction.

Rolex adopted the Daytona name after serving as the Speedway’s official timekeeper in 1962. The first Cosmograph Daytona, Reference 6239, launched in 1963 and was produced until about 1969. As this watch was made specifically for racing, Rolex simplified the dial for legibility by engraving the tachometer scale directly on the case bezel. Very early pieces, such as the example offered in Watches Online, feature a tachometer scale calibrated to 300 units. Later models of the same reference have a scale calibrated to 200 units. 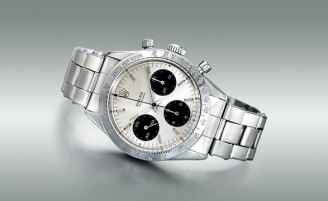 Reference 6239 dials do not contain the “oyster” description. Very early models from 1965 and prior do not feature the Daytona signature either. The present lot features an extremely well-preserved simple dial, with only two lines for “Rolex Cosmograph.” This beautifully warm and honest dial contributes to the collectability of this timepiece today.