Advisory: Please note that this article includes images of nudity and of a sexual nature

T he most electrifying sale in the art calendar, Sotheby’s Erotic Online, sashays back for a fourth year to quicken the pulse and delight the eye. Connoisseurs of art seduction will find plenty to beguile. The auction showcases sultry odalisques, saucy pop art vixens, Cocteau and Hockney sketches, literary masterworks and transfixing photographs that would enhance any boudoir. Since the sale moved online the scope and variety of artworks on offer has broadened and many more viewers and buyers participate. There is no finer antidote to the storms of February than to lose yourself for an hour or two in contemplation of these miracles of desire.

I’m a huge admirer of the leonine French photographer Bettina Rheims, whose collections of photography included 1989’s Female Trouble, where a tantalising array of strong, pout-mouthed sexy, women challenge your gaze (some famous, some not) and Modern Lovers, a penetrating exploration of gender identity and sexuality. This arresting, playful image of Sharon Stone was taken in 1996 at the peak of the actress’s fame. I love her closed eyes and gaping, sensual mouth and the parody of lasciviousness and fame as she makes love to a diamond collar. Basic Instinct was one of the landmark films of my twenties: celebrated for the noir themes and obvious voltage between Stones’ and Michael Douglas’s characters. This sly photograph exquisitely captures the movie’s quality of erotic manipulation.

Majorelle is an undisputed master of the modernist school of orientalism. He first went to Morocco in 1917, when he was in his early 30s, and was instantly beguiled by the people, colour and light. He returned to live there and, eventually, to landscape his own Eden in Marrakesh, the lush Jardins Majorelle, which has become as acclaimed as his art. While his souk canvases bustle with life and movement, there’s an arrested, heady intimacy to his nudes. Sous Les Palmiers Dattiers, above any I’ve seen by Majorelle, has the disorientating quality of a dream. The sky is the deep indigo of advancing night and the two seated models have their eyes closed, as if under a spell. One holds a platter above her head, which makes no narrative sense in her stance of deep contemplation. The jewel-bright fruit high up in the background palms suggests unobtainable pleasure. These women tantalise, but they do not yield.

I’m in love with this young woman. I adore the nonchalance of her pose, the robust attitude expressed by her lazy smile and swinging leg. I love her unabashed glee in her svelte young body and heavy silver amulets. There’s a sensual vivacity which makes you feel she could sit up suddenly and step from the canvas. And perhaps what I love best is the fact that the painting in Baigneuse Aux Bijoux is sketchy and unfinished, a study for a larger work. We aren’t distracted by a wider narrative but can fully relish this one jaunty character. Dinet’s rapport with his model is obvious; she’s fully at ease. Which makes perfect sense if you know the artist became entranced by Algeria and its culture, learnt Arabic and eventually spent three quarters of his time at his house in Bou Saada. He even converted to Islam and when he died, 5,000 Algerians attended his funeral.

There’s an other-worldly sensuality to Benner’s languid, creamy beauties in At the Water's Edge – a delicacy of brushwork that puts you in a reverie. Time stands still as they lounge beside an expanse of glassy water, unruffled by wind or currents. The scene seems deliberately ambiguous: these women could be flesh and blood seductresses, or nymphs from antiquity. Stripped of clothes and context, they are ageless beauties in a season that’s forever verdant. The extraordinary softly-merging tones of jade and emerald green in the pool and foliage heightens the sense of an erotic dreamscape. We intrude upon the pair’s intimacy to feast on their curves – but the hint of a smile lurking on the sitting nude’s mouth suggests they do not mind.

This neon-bright canvas radiates an intense – almost overwhelming - yearning to be reconnected to the beloved, body and soul. Kitaj’s wife, the artist Sandra Fisher, died of an aneurism in 1994 aged only 47 and the artist never fully recovered from his grief and raw loss. Several key works from the later period of the artist’s life depict the ageing Kitaj making love to his lost soul mate. Although the subject is unabashedly explicit, the image is worshipful and reverent. Kitaj is a supplicant, kneeling at his lover’s feet with his face pressed to her vulva, while her caress is like a benediction. The vivid Californian hues make a jarring contrast with the dark black shadow massed at the painting’s top right corner. Death, Kitaj seems to say, is waiting for him – but it holds the promise of the reunion he so urgently seeks.

Few images are as saucily exuberant as Cocteau's Erotique – Arlequin Dansant. The eye is first drawn to the harlequin's dreamy smile and heaven-raised eyes. It’s only then you look down and note his jutting penis, pubic hair and fig-like balls. It’s as if Cocteau is considering what could be more delightful than innocent joy in one’s own erotic response. It seems very appropriate in our eco-obsessed age that Harlequin’s arousal seems to stem from lying on soft grass, legs splayed to all onlookers. The palette is so delicate here, the lines so sure and gentle that only the most dedicated anti-sensualist could fail to find joy in the sketch.

For the modern art lover, a haughty model can be sexier than a come-hither, flirty one – and this nude by George Spencer Watson is deliciously snooty. Nothing in her face seeks to seduce the artist or onlooker, yet the jut of her buttocks and upward thrust of her small, angry nipples are somehow irresistible. Added to all that is fact that Spencer Watson was a genius with colour and one of the finest British portrait painters of the early 20th Century. The deep, rich claret of the curtain and vivid blue of the chair offset the model’s pale pink, creamy body to perfection. It’s all push and pull this picture – a mix of tensions that reminds one inevitably of seduction. I’d love to know who the model was. You feel you could play poker with her – and she’d win.

I’m a sucker for Surrealism and this enigmatic canvas by Delorme springs straight from the wellspring of the subconscious. The title of the painting is taken from Francois Rabelais’s satire Gargantua and Pantagruel where the Abbey of Thelema is envisaged as a form of anti-monastery where the enlisted devotees spend their life in pursuit of free will and pleasure. It’s a party many of us would love to join. The contrast of medieval architecture with artfully posed nudes is highly seductive – the women almost seem to be “Vogueing” their way around a palazzo. And there, at the back, lurks a watchful robed mother superior, keeping watch on her free-spirited, mostly naked charges.

Sometimes you feel painfully excluded from the dreamscape of a painting and Federico Beltran Masses' Muses of The Guadalquivir is one such work. I long to climb aboard with these women and become a fellow traveller to the realm of permanent carnival. The sensation is eerily akin to watching the Venetian scenes in the Offenbach’s great opera The Tales of Hoffman, where Hoffman’s passion for the courtesan Giuletta sees him risk the loss of his own shadow. The chalk-faced beauty in blue silk, whose eyes are kohl-rimmed to the point they’re a mask, conveys the same message: come here at your peril. There is always a price to pay for decadence, but the mesmerising beauty of this iridescent canvas suggests it might be one worth paying. Masses’ bold blue outlines to every curve layers seduction on seduction.

No novel is the literary canon is more electrifying than de Laclos’s masterpiece of seduction, Les Liasons Dangereuses. The book charts the rivalry of the Marquise de Merteuil and the Vicomte de Valmont, former lovers who now vie to outdo one another in terms of conquest and erotic manipulation. I saw the acclaimed stage adaptation by Christopher Hampton in 1986 and it left an indelible mark on me. I have never been so breathless or so aroused in the theatre, or so aware there were others sitting around me. The novel has inspired films, operas and ballets. And it also inspired the flamboyant illustrator George Barbier to compose his sexiest work. Take a look, it’s the stuff of rude fairy-tale.

If I were to snatch one photograph from the sale it would be this one – Domestic Nude X Young Woman Lying Under My Desk, Chateau Marmont. Helmut Newton is the undisputed master of the late 20th Century nude, marrying technical genius to raw eroticism and wit. This image is typically playful: the relaxed nude with her glorious full crop of pubic hair lounging under the chaotic desk. And her casual entanglement with all those telephone wires. I love her stern air of, “Enough is enough. Stop work. Play with me.” There’s always a sense in Newton’s photographs that the model is aware of her own considerable power.

I’m always intrigued by portfolios of erotic art that have clearly been designed for a private commission. These spectacularly unfettered depictions of homoerotic sex scenes by René Bollinger present a delightful mystery. Which patron commissioned them and kept them in his private library? The “Sanguine” of the title suggests that he desired them to be both red-blooded but cheerful – there’s no pain or anguish in these ever-more inventive couplings (and more than a hint of the borderline kitsch joy we also see in Tom of Finland’s work). I particularly love the muscle-bound youth who reclines on a bed in absorbed ecstasy as five winged phalluses flutter around him. I tried to research René Bollinger, but could only track down some equally spirited pictures of horses – and one image of a naked man alongside a horse. You don’t have to be Sigmund Freud to understand how the splendid musculature of a horse can send you into a sensual reverie. I may know little about Bollinger the man, but he clearly delighted in the life force. 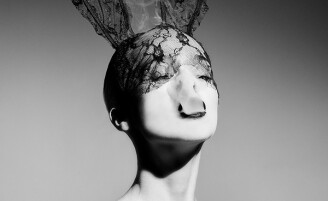