L ost in the melting clocks and contorted figures of Salvador Dalí’s warped reality, one must be reminded not to take the artist’s fantastical work at face value. Like his paintings and sculpture, Dalí’s jewels are certainly a reflection of their eccentric and ambitious creator, but the artist himself once warned spectators not to think of them as mere whimsy. "Illusory! Dalínian jewels are totally serious. I'm glad that people smile at telephone earrings. A smile is something pleasant. But those earrings, like all my jewels, are serious. They represent the ear; symbol of harmony and unity. They connote the speed of modern means of communication; the hope and the danger of an instantaneous change of thought."

No stranger to experimentation with form, Dalí began designing jewelry in 1941, applying his token idiosyncratic approach to traditional objects and wearable art. The Catalonian artist was a leading figure of the Surrealist movement, however his work had been expelled from the genre’s shows by the end of the 1940s. Dalí began to view himself as more of a cross-disciplinary artist, much like the Italian Renaissance masters he admired. 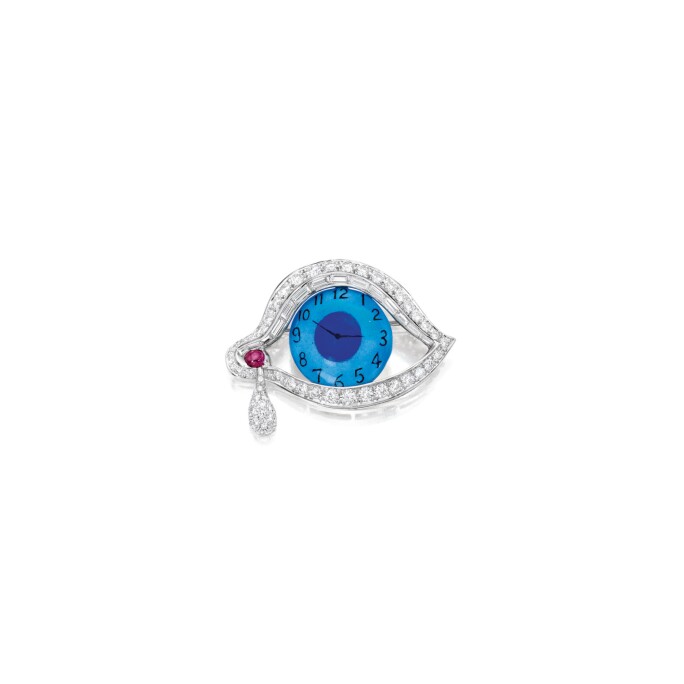 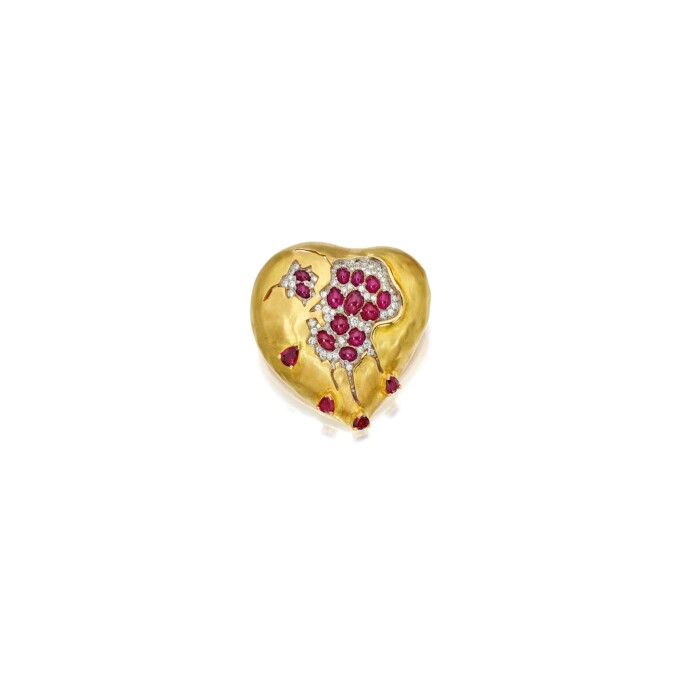 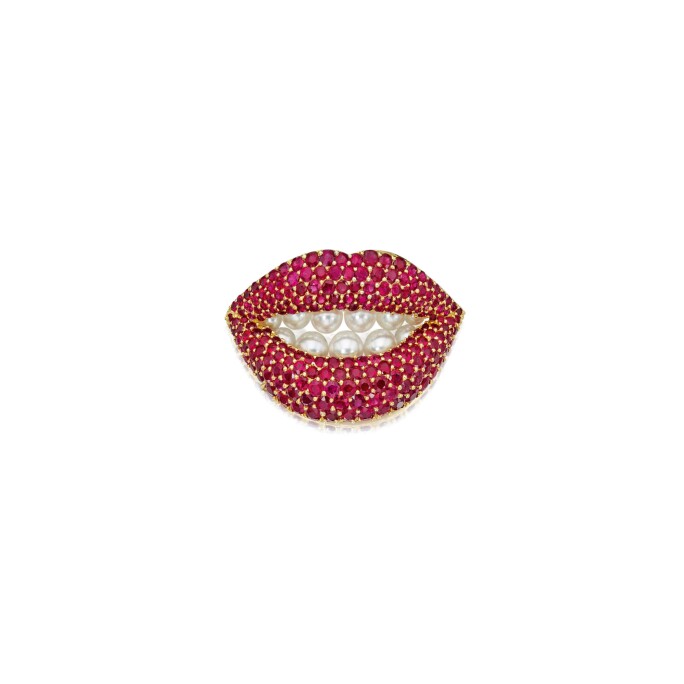 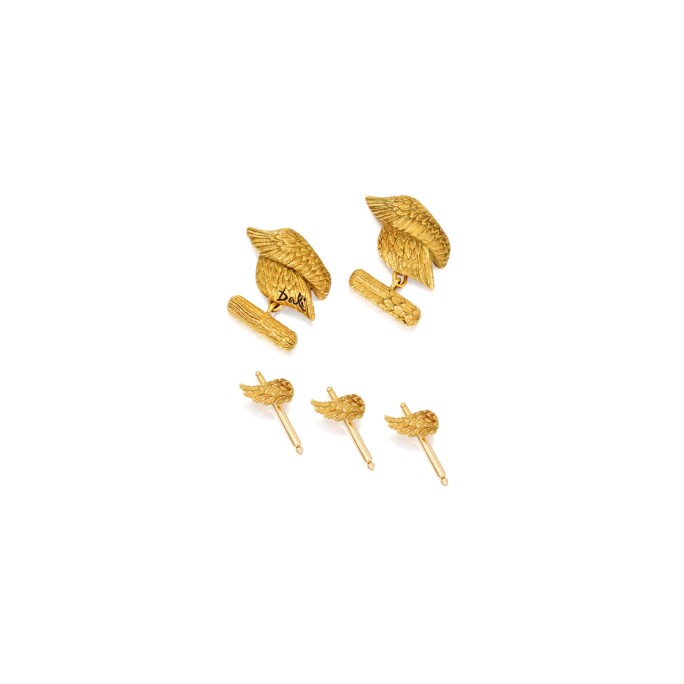 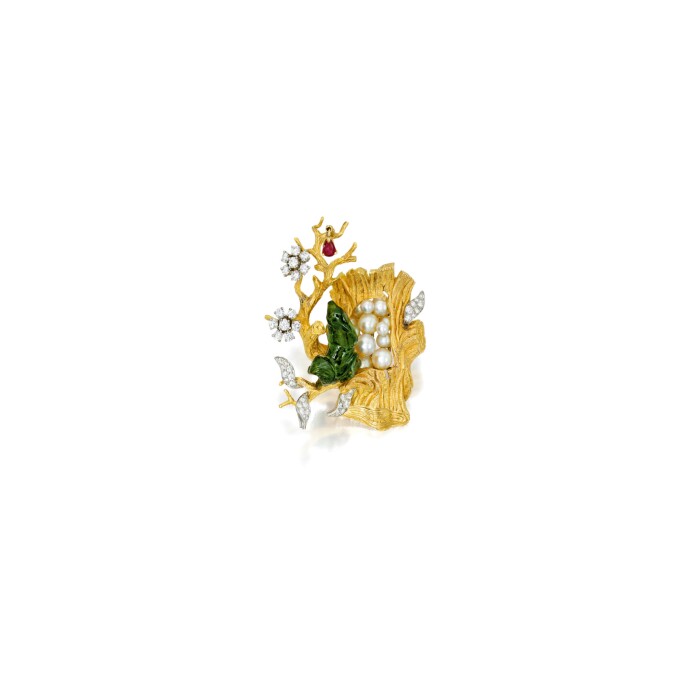 "Paladin of a new Renaissance, I too refuse to be confined. My art encompasses physics, mathematics, architecture, nuclear science—the psycho-nuclear, the mystico-nuclear—and jewelry—not paint alone,” Dalí wrote in the introduction of a 1959 catalogue of his jewels. No matter the medium, Dalí continued reinventing universally celebrated subjects, such as the heart, cross, crown, Madonna and female form, throughout his career.

The idea of metamorphism and cosmology in both nature and religion are also quintessentially Dalí themes, often buried in the deeper meanings of his work. “Anthropomorphic themes appear and reappear in my jewels. I see the human form in trees, leaves, animals; I see animal and vegetal characteristics in humans,” the artist said. “My art — in painting, diamonds, rubies, pearls, emeralds, gold, chrysolite — demonstrate how metamorphosis comes about; human beings create and change. When they sleep, they change totally — into flowers, plants, trees. The new metamorphosis takes place in Heaven. The body becomes once again whole and reaches perfection".

Around 40 jewels were made by Dalí between 1941 and 1970. The artist was heavily involved in all steps of the production of his designs, but it was the Argentine-born silver and goldsmith Carlos Alemany who brought Dalí’s jewel-encrusted visions to life. In his New York workshop, based in the St. Regis Hotel, Alemany would help create mind-bending jewels, many of which were one of a kind. Dalí selected stones based on color and their symbolic associations, but both he and Alemany agreed that the design and construction of every piece were the priorities. Their painstaking craftsmanship and singular imagination is what makes Dalí’s jewels so genius.

In 1949, the Philadelphia banker and philanthropist Cummins Catherwood and his wife Ellengowen, both patrons and later friends of Dalí’s, acquired 22 pieces of jewelry, directly from the artist. In May 2017, Sotheby’s sold the legendary Eye of Time brooch from this family’s collection. It represented one of four known Eye of Time examples, which also includes one sold by Sotheby's in May 2014 for a staggering $1,055,000.

That Eye of Time was formerly in the collection of The Owen Cheatham Foundation who acquired the Catherwood collection of jewels in 1958. The collection would be exhibited to raise money for various charitable and cultural causes at both the Virginia Museum of Fine Arts in Richmond and the Dalí Theatre-Museum of Figueres, where the artist was born. In 1981 it was acquired by a Saudi multimillionaire, followed by three Japanese entities, before finally being bought by the Dalí Foundation in 1999, with the advice and supervision of the Associació Espanyola de Gemmologia (Spanish Jewelry Association).

Whether a mechanical flower with petals that open and close, or a ruby heart-shaped brooch that steadily pulses, Dalí’s gems are in a league of their own when it comes to blurring the lines between jewelry and art.