By Jennifer Huang Bernstein
Translate this page
Named after the Tang dynasty poet who wrote The Classic of Tea, Luk Yu Tea House has been a gathering place for literati, artists, entrepreneurs and other Hong Kong luminaries for more than eight decades. It is an important part of the city’s history and one of the last vestiges of a vanishing tradition.

The practice of yum cha tea drinking, which has been an integral part Hong Kong’s cultural history, has evolved in past decades. Providing more than just tea and refreshment, tea houses also had an important social function as a place where people could develop guanxi relationships, exchange news and ideas, and conduct business. Hence tea houses flourished, particularly during the 1960s and 1970s. As steel and glass towers sprung up around the business district of Central in Hong Kong, many of these bustling, older-style tea establishments disappeared one by one. Such is the lightning speed of modern life that these unhurried meetings over tea and refreshment are now considered a luxury, whereas they had previously been an essential part of everyday life.

Luk Yu Tea House stands as one of the oldest tea houses in operation today, and remains highly regarded not only for its fine selection of pu-er and excellent dim sum, but also for the notable clientele that frequents its tearooms.

It is well known that many entrepreneurs, tycoons, actors, scholars, and artists rub elbows at the gracious tearooms of Luk Yu. Although the different floors have at times been somewhat divided socially, the tea house was a place that regularly saw various strata of Hong Kong society from the cultural elite to the everyman. Many shared tables. And in this softening of social distinctions permitted regulars and strangers alike to enter into conversations or start friendships.

A Gathering Place for the Literati

Such an informal space is especially conducive to open exchange, attracting poets, artists and other scholars. Luk Yu had long been a social hub for artists such as Zhang Daqian, Deng Fen, Zhao Shao’ang, Yang Shanshen, Huang Junbi, and Han Yongyu. It was the place to be for artists and writers. In a way, the tea house was not unlike the Parisian cafés that became the epicenter of Bohemian life and culture during the days of Pablo Picasso, Henri Matisse, Gertrude Stein, and Ernest Hemingway.

Zhang Daqian frequented Luk Yu during the months he lived in Hong Kong during the early 1950s. He presented his paintings to close friends, including several masterpieces with special dedications given to the owners of Luk Yu as a gesture of friendship. Among these works are Mount Huang Scenery, which bear inscriptions that are evocative of the good times at the tea house, and Scholar Resting Under Pine Tree, a rare painting jointly created with Pu Ru, an artist and cousin to the last Emperor Pu Yi.

A Treasure Trove of Art

Those who are unaware of Luk Yu’s history might be surprised to learn that the tea house has a prized collection of paintings. Some of these works are on display on the walls of the tearooms where patrons meet in the daytime for refreshment, and it was this impressive collection that was the target of a robbery in 1996. Thieves broke into the famous tea house during the night and took 18 masterpieces of Chinese painting and calligraphy. Many of the works bore dedications to the tea house, and among the most valuable were paintings by Zhang Daqian, Yu Pingbo, and Deng Feng. After the theft, Luk Yu improved security, selected other works from their collection to hang on the walls in place of the stolen paintings. The fact that the tea house continues to display works of such beauty and renown is telling of its style.

A Home Away From Home

Much of the history of Luk Yu can be seen in its classic Lingnan décor. The Qing-style rosewood furniture is appointed harmoniously in a space with choice colonial accents. From the stained glass to the tasteful works of art, the potted plants to the elegant staircase, the interiors are elegant without being excessively formal. It creates a gracious home away from home. For many regular patrons, Luk Yu has long been an oasis of comfort, a source of friendships, and a central part of daily life – earning the tea house a special place in the hearts of those who consider Hong Kong their home.


When Luk Yu Tea House first opened in 1933, it was located on Wing Kut Street but was forced in the 1970s to relocate owing to development. Many loyal clientele raised funds to help Luk Yu secure its current location on Stanley Street, a building which is notable also as the place where Sun Yat-sen launched his revolutionary newspaper China Daily.

Sotheby’s will present two paintings by Zhang Daqian from the collection of Luk Yu Teahouse in the Fine Chinese Paintings Autumn Sale on 7 October. 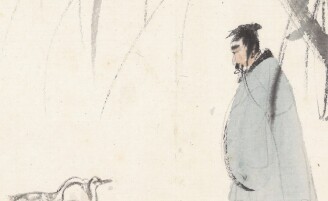