By Rowan Pelling
As Sotheby’s prepares to sell a very special copy of 'Lady Chatterley's Lover' at auction on 30 October , Rowan Pelling, editor of The Amorist, reminds us why this book was and is a literary phenomenon.

I own two treasured copies of Lady Chatterley’s Lover. The oldest, volume was published in 1945 by Jan Förlag of Stockholm. It boasts the legend “unexpurgated authorised edition” on the inside cover. I discovered this well-thumbed contraband edition amongst my stepmother-in-law’s effects after her death aged 93. It was still wearing a makeshift book-cover fashioned from a brown paper bag from EP Rose & Son of Bedford. I couldn’t help smiling at the thought my bold, ballsy in-law almost certainly first read the novel while working at Bletchley Park during WWII. It’s easy to see how a little racy, under-desk literature would lift the spirits in wartime.

My second copy of DH Lawrence’s most infamous work is a far more familiar affair: the 1960 orange Penguin mass-market paperback with the black ink phoenix arising from flames. I first stumbled across it aged 14, while scouring my parents’ shelves for something thrilling to read. The scandal attached to the title was relatively recent and Lady Chatterley was still a byword for titillation. Imagine my chagrin when I thumbed through the novel and found it was a complex work of literature, as deeply concerned with class tensions as sexual intercourse. It would be another couple of decades before I properly understood the book as a masterpiece of erotic and social tensions. Another 25 before a TV producer asked if I’d read out an explicit passage from the book for a BBC3 documentary and say “the C-word” on a public broadcast (apparently no other woman they approached said yes, including Germaine Greer).

This month Sotheby’s offers a near identical Penguin version of Lady C for auction. But one with a unique historic provenance. This copy was once owned by Sir Lawrence Byrne, the judge who presided over the Lady Chatterley obscenity trial in 1960 – the epoch-defining moment when the Brit old guard came up against crusading liberals, keen to do away with prudery, censorship and sexual inhibition. As the poet Philip Larkin wrote in Annus Mirabalis

Sexual intercourse began
In nineteen sixty-three
(which was rather late for me) –
Between the end of the “Chatterley” ban
And the Beatles’ first LP.

The historic volume comes with a dinky hand-sewn damask bag (one stage up from brown paper) so Byrne wouldn’t be photographed clutching the book as he entered the courtroom. The bag and the annotations to the text – exclamations of “coarse” and “more lovemaking” – were made by the Judge’s wife Lady Dorothy Byrne, who dutifully ploughed through the text, noting the allegedly smutty bits. But she was fighting an uphill battle. In 1959 Roy Jenkins pushed through changes to the Obscene Publications Act, including a clause allowing explicit writing to be judged in terms of literary merit. The publishers Penguin seized the moment, knowing full well there would be a high-profile court case. They tracked down irreproachable advocates of the novel such as EM Forster and the Bishop of Woolwich. The Bishop said Lawrence portrayed sex as “an act of Holy Communion” and nodded enthusiastically when asked if it was a book “Christians ought to read.”

The poor prosecuting counsel, Mervyn Griffith-Jones was on a hiding to nothing. It didn’t help when he uttered the most pompous statement in the history of court records, asking the jury (nine men and three women, who had to read the novel in the jury room) if it was “a book that you would have lying around in your own house? Is it a book that you would even wish your wife or your servants to read?” The irony is these questions went straight to the heart of Lady Chatterley’s Lover, which depicts a free-spirited wife transgressing outside her sexless marriage to a wheelchair-bound aristocrat and finding passion with a gamekeeper – i.e. servant. No wonder Griffith-Jones and his establishment peers were appalled.

And indeed the 1960s were riven with exactly this sort of social disruption; working class lads like the photographer David Bailey and actor Michael Caine had the pick of society girls and models. Then there was true scandal with the revelation that showgirl Christine Keeler had been having an affair with Cabinet Minister Lord Profumo. Many historians cite the Lady Chatterley court case as the starting point of the so-called permissive society. Either way, it was a triumph for the publishers Penguin, who sold 200,000 copies on the first day, that the ban was overturned. Bookseller Foyles alone sold 300 copies and placed an order for 3,000 more copies.

So it’s easy to see why the late, celebrated collector Stanley Seeger acquired the judge’s copy when it last came up for auction in the early 1990s (at the time it reached the highest price ever paid for a paperback). Hugh Casson once said of Seeger that he regarded “the conventional as a signal of surrender” and few objects can be quite so emblematic of rule-breaking as Lady Chatterley’s Lover. 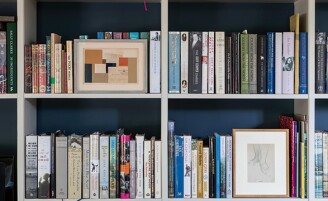