Rolling Through Time: A Brief History of Rolls-Royce

By Forest Casey
RM’s Palm Beach auction affords the opportunity for bidders to browse over 70 years of Rolls-Royce history. Below, we take you on a tour through the ages, guided by the enduring luxury of this storied maker. Each of these excellent automobiles will be on offer at RM Auctions's upcoming Palm Beach sale, which is now taking place online, opening 20 March for bidding.

One of the most legendary coachbuilders in British history, Hooper & Co. was originally founded in 1807—eight decades before the birth of the automobile. Hooper’s expertise in building carriages for British nobility easily translated to the era of custom-built motor cars. Handmade in extremely limited quantities, this 1957 Silver Cloud Sports Saloon featured a shortened wheelbase for spirited motoring and a swooping side profile (known as the “Empress” style) which seemingly sprang fully formed from chief designer Osmond Rivers’s pen.

If you wish to see the dramatic differences between coachbuilding styles, scroll back and forth between this Phantom V Touring Limousine built by James Young in 1961 and the previous entry, built by Hooper & Co. in 1957. Perhaps befitting its namesake, James Young was the more youthful of the two companies, though the work of Young’s chief designer, A. F. McNeil, could be described as more restrained and statelier than that of Hooper’s Osmond Rivers. This limousine features a foldaway rear jump seat and full appointments for a proper picnic in the UK countryside – stowable tables, champagne flutes and built-in storage for wine bottles.

By 1963 the era of fine British coachbuilding was nearly over. Five years prior in 1958, Rolls-Royce announced they were no longer offering bare chassis for custom builds. The following year, Hooper & Co. showed its final four cars at the Earls Court Motor Show. James Young’s last coachwork was completed in 1968. But that did not indicate the end of fine British motor cars altogether—Rolls-Royce took up the slack themselves, purchasing a controlling stake in H. J. Mulliner in 1959 and merging the firm with their longtime in-house coachbuilder, Park Ward Limited, to create Mulliner Park Ward in 1961. Rolls-Royce debuted the refreshed Silver Cloud III (and its Bentley S3 sibling) on a separate coachbuilding stand at the Paris Auto Salon in 1963, showing off the breadth of the storied company’s expertise.

Two distinct flavors of the same generation of Silver Cloud, these two cars have both been recently restored. Like the finest examples of 1920s and 1930s Rolls-Royce saloons, the flowing lines of the Silver Cloud III lend themselves equally well to a vibrant two-tone paint scheme (like the red-and-silver example above, left)...

...as they do a more traditional shade (like the black example above, right). Underneath its subtle exterior, the more reserved example (right) has been updated with a modern air-conditioning system and radio.

The bulk of the action in this extended-wheelbase 1965 Rolls-Royce Silver Cloud III LWB can be observed in front of the C-pillar—if you scroll up and compare it to the 1964 or 1963 examples above, you can clearly see the impact of the added length. One of only 206 LWB versions produced, this grand limousine was one of a scant few built without a window dividing passengers from the driver. Featuring contrasting red exterior pinstriping and a bevy of modern amenities, this recently restored Rolls-Royce is perfectly equipped to convey you and your companions in air-conditioned comfort.

Like fellow British icons the Rolling Stones, Rolls-Royce thankfully avoided “Sucking in the Seventies.” After a brief, voluntary liquidation in 1971, Rolls-Royce was officially owned by the UK government. The company’s financial difficulties stemmed from a contract to supply US-based Lockheed with a shipment of technologically advanced, turbocharged jet engines codenamed “RB11.” Nine months past the contract’s 1970 deadline, the first RB11-equipped Lockheed jet flew across the Atlantic. Four decades later, the RB11 powered roughly half the commercial airplanes in the world. The financial success gave Rolls-Royce the freedom to modernize their platforms; the company’s second-generation Silver Shadow launched in 1977, complete with rack-and-pinion steering and a refreshed front suspension for improved handling.

Named for an idyllic region of lakes near the French Riviera, the Camargue was the first non-coachbuilt Rolls-Royce designed by an Italian⁠ – Paolo Martin of Pininfarina. No cabriolets were offered – all open-top Rolls-Royce Camargue cars were converted from coupe form. This pair of pristine Rolls-Royce Camargue Drophead Conversions were executed on different continents. The red Camargue was delivered new to Japan and retains its original right-hand-drive configuration and white leather interior with contrasting red piping.

The black Camargue was originally purchased by A. H. al-Sahi and later imported to North Carolina by R. L. Roethlisberger, who commissioned the drophead conversion.

In 1979 the Camargue was equipped with the independent rear suspension from its Silver Spirit stablemate, reinforcing the idea that the top-of-the-line Rolls-Royce was, for once, intended to be driven by its owner rather than a chauffeur. The Camargue’s headline feature still had to be its dual-zone climate control, which not only allowed passengers to select a different temperature from the driver, but different temperatures for the upper and lower vents as well. According to Autocar’s in-period review, “all incoming air is cooled and de-humidified before passing to the heating and air-blending unit.” The elaborate system was managed by a solid-state electronic control system with 28 separate transistors, a first for Rolls-Royce. Of course, the power top on this Camargue drophead conversion could be regarded as the ultimate option for climate control.

This late-model, US-spec Camargue was delivered new to Len Immke Buick of Columbus, Ohio. At the time, the NADA list price for a 1979 Camargue was an unbelievable $136,500 – making it the most expensive car by a fair margin. Prices for the US market were $5,000 higher than in the rest of the world, running against the trend of foreign manufacturers offering lower prices for their American exports to compete in the cost-conscious US domestic automobile market. This example has been in the same ownership since the early 1980s; the drophead conversion was finished in 2003 by Newport Convertible Engineering.

Rolls-Royce’s replacement for the Silver Shadow, the Corniche originally debuted in 1971 – a pivotal year for the firm, as described earlier. Named for the Grand Corniche, a scenic highway linking Nice and Monte Carlo, the Corniche evoked visions of open-top motoring. Unlike the Camargue, the Corniche was available as a convertible from the factory. The second-generation Corniche II featured anti-lock brakes for 1988, along with upgraded front seats and instrumentation. This example sports the height of 1980s communication technology – a wired car phone.

The capstone on an impressive collection of open-top Rolls-Royce luxury cars, this 2008 Phantom Drophead Coupe was the first model built for the North American market. A commemorative plaque noting the drophead coupe’s “Build No. 1” status greets the driver and passengers upon entry; the rear-hinged coach doors and Parchment-colored cloth top are both powered. Fully retracted, the power top is hidden beneath a teak wood-paneled tonneau cover. The Parchment-colored leather interior is framed by a band of bare stainless steel that flows to the two-tone hood. Originally purchased at a charity auction in Naples, Florida, in 2007 for $2 million, this particular Rolls-Royce was believed at the time of sale to be the most expensive new car ever bought in the United States. 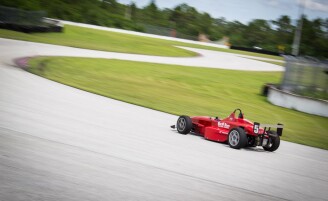