T he sculpted head Tête, which features in the Design sale in Paris on 31 October, was the first work that fashion designer and collector Jacques Doucet commissioned from the Hungarian artist Joseph Csaky.

Csaky moved to Paris in 1909 and briefly studied at the Academy of Applied Arts in Budapest and then trained in stonemasonry while working on construction sites. He was one of the first artists to apply the principles of Cubism to sculpture. When the war ended, he was signed by the gallery of Léonce Rosenberg, an art dealer who took a keen interest in his work and saw him as one of the major sculptors of his time.

Doucet probably discovered his work at the gallery. In 1921 he purchased a stone head of a woman, and then commissioned several works from Csaky from 1923 onwards. It was during this period that Csaky began to soften the geometric, nested shapes of his sculptures and shift towards gentler, purer lines.

Tête was the first work that Jacques Doucet commissioned, installing it in his Avenue du Bois apartment and then moving it to his studio in Neuilly with the other jewels of his collection. Displayed on a Legrain cabinet whose central panel was carved by Miklos, it is flanked by Miklos’s bronze and lacquer Bêtes Affrontées (Sotheby's Paris, Ginette et Alain Lesieutre, June 29, 2017). Other works by Csaky joined the collection at that time, such as the bas-reliefs he designed for the staircase. He also sculpted a stone model of a lion’s head for a home in Marly le Roi that was never built.

He carved an initial stone version of the head in 1922, which can now be found at the Kroller-Müller Museum in Otterlo (Netherlands). Our head is one of the rare pieces that Csaky sculpted from rock crystal. The only other known pieces in this material are a few small animals exhibited by the decorator Marcel Coard, and later on a peacock for Madame Solvay (in the former Félix Marcilhac collection sold by Sotheby's Paris, March 11 and 12, 2014).

The use of rock crystal adds purity to the perfectly oval face, which has no features or expression and whose ears are merely suggested by two stylised rectangles. The artist has used a decorative technique that harks back to Antiquity, with a frieze of small engraved and gilded circles in the hair and coif giving a sense of opulence. An obsidian triangle on the coif and an element embedded in the square base serve as deep black counterpoints that materialise this otherwise entirely translucent piece.

A detailed comparison of photographs taken at Avenue du Bois and then later in Neuilly show that the work was changed in between the two. The base appears to have been turned, with the black block having initially been at the back of the base and not at the front below the chin. This may have been done at Jacques Doucet’s request, to accentuate the contours of the work and give it more presence. Doucet was known to regularly request changes from his artists.

In Jacques Doucet’s studio, our head echoes another, “Sleeping Muse 2” in polished bronze by Constantin Brancusi, also dated 1923, arranged on a carved wooden cushion on the floor. It has the same pure lines and references to primitivism.

Csaky’s rock crystal head is at once a portrait of an idol from ancient times past and an icon of early Art Deco sculpture with echoes of modern sculpture. 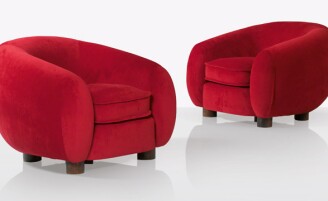