Remembering Derek Pratt, a Master of All Times

A head of the Important Watches sale in Geneva on 12 November, Jonathan Betts, former Senior Curator at the National Maritime Museum in London, remembers the extraordinary watchmaker Derek Pratt, who had important connections to George Daniels, and initiated the reproduction of John Harrison’s H4, the marine timekeeper that won Harrison the Longitude Prize.  Charles Frodsham & Co. took the project over at Pratt’s request.  Frodsham’s finished production four years following Pratt’s untimely death in 2009. The H4 reproduction  went on to appear in the National Maritime Museum exhibition of Ships, Clocks and Stars.  Today it is part of a private collection.

What a privilege it is to say that Derek Pratt was a friend. Over the years, whenever Derek and I met, I was struck by that extraordinary combination he showed of immense technical knowledge and practical talent, with the most refreshing humility and modesty. It’s a quality given to few and surely the mark of one who was a great man in his field. That he was content for much of his superb craftsmanship to appear under the name of another celebrated watchmaker, Urban Jurgensen, speaks volumes for this quality. Derek also made the very small escape wheel pinions for some of the wrist watches produced by his good friend George Daniels, something, in deference to George, he rarely mentioned.

As a relatively young Curator in the early 80s I visited Derek in Switzerland to introduce myself. He was, of course, exceedingly busy, but took a whole day off to show me his workshop and talk horology, encouraging and inspiring with every word. In later years I did my best to repay his generosity when he was creating a replica of Harrison’s masterpiece H4. The timekeeper was working in those days and three times in the past I had had H4 in pieces for cleaning, so was able to steer Derek in the right direction on its construction. This was, however, complicated by the fact that I was forbidden by the owners of H4 (MoD Art Collection) from allowing dimensional data to be taken from the original for replication purposes. Finding ways to help Derek whilst observing this ban proved tricky, but help was given - I would not have taken the trouble with a lesser man.

There is now a unique opportunity to acquire something by this consummate craftsman. In particular, the extraordinary minute repeating perpetual calendar hunter, finished by Derek with one of his exquisite dials, is a veritable tour de force of complication. And the tourbillon with Derek’s superb remontoire is something I covet perhaps most in this delectable collection. I just wish I could afford to own one of these very special pieces of horological history.

Jonathan Betts MBE recently retired as Senior Curator of Horology at the National Maritime Museum Greenwich.  His most recent work, The Marine Chronometers at Greenwich (NMM/OUP) is due to be published in January.  He is a Past Master of the Worshipful Company of Clockmakers, a horological scholar, author and an expert on the first Marine Timekeepers of John Harrison.

The Important Watches sale is in Geneva on 12 November 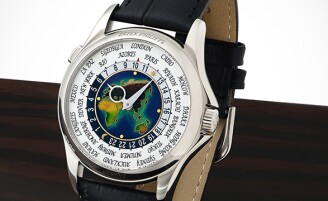