H istory was made last night at Sotheby’s as Oliver Barker took to the rostrum to preside over Rembrandt to Richter, the first sale of its kind incorporating multiple locations and works from across categories, spanning 500 years of art history. In a truly unique sale format, the narrative of Western art was presented through property of the highest calibre. Fresh-to-market works and rare rediscoveries from history’s most important figures sat alongside stand-out paintings and sculptures that challenged the boundaries of artistic production for over half a millennium. The auction was led by Joan Miró's Peinture (Femme au chapeau rouge) that realised £22.3 million. The sale total stands at £150 million, bringing Sotheby's flagship summer sales to almost £1.1 billion.

Rembrandt to Richter marks a distinct reinvention of the auction format, more than 60 years after former Sotheby’s chairman Peter Wilson held the first ever evening auction – the Goldschmidt sale – in 1958. Wilson recognised the need to innovate, ensuring that discerning clients were offered the very best the market had to offer, and it is in this spirit that Rembrandt to Richter arrives on the world stage as the auction of the future.

The technological element of the sale is the first of its kind: the live auction was attended by a small number of clients hosted at socially-distanced tables and in private rooms, with many others joining from locations across the world for a carefully tailored live-stream broadcast, bringing the world of Sotheby’s together for one spectacular event. Those in the building were entertained not just by the energy and drama of the bidding itself, but with a personalised experience including a curated selection of Sotheby’s wines accompanied by a specially designed menu.

As well as the works from which the sale takes its name, the evening was led by two extraordinary collections, The European Avant-Garde: A Private Family Collection and Louise Bourgeois, The Architecture of Memory: Works from a Private Collection.

A rguably one of the artist's finest creations, Rembrandt’s self-portrait sold for £14.5 million, and set the scene for an auction filled with masterful examples of portraiture through the ages. The jewel-like canvas was joined by a number of works from masters of the genre, including Henri Matisse’s elegant and sensuous 1942 painting Danseuse Dans un Intérieur, Carrelage Vert et Noir that inspired energetic bidding from several clients around the world, bringing £6.5 million.

Other works include Jenny Saville’s mesmerising Stare III which reached £3.1 million and Kehinde Wiley’s Alexander I, Emperor of Russia which sold for £175,000, demonstrating that his stock continues to rise after his commissioned portrait of President Barack Obama was recently unveiled in the White House.

Watch the bidding battle for Rembrandt's self-portrait, which hammers down at £14,549,400

Works exploring abstraction were represented in almost every category, with Andrew Graham-Dixon asserting the very genesis of the concept can be traced in part to the drapery of fabric in the work of the Old Masters, right through to artists of the 19th century who began to challenge the limitations of figurative painting, and began a pioneering journey in towards abstraction.

One of the finest examples of Joan Miró's 'dream paintings', many of which reside in museum collections around the world, Peinture (Femme au chapeau rouge) – which was once owned by fellow artist Alexander Calder – is an extraordinary example of an artist at the height of his creative experimentation, and after a lengthy bidding battle went on to achieve £22.3 million.

David Hockney’s Pool on a Cloudy Day with Rain (Paper Pool 22),from his celebrated Paper Pool series sold for £4.9 million. The series is comprised of a limited number of vibrant, unique works that marry Hockney’s most enduring and acclaimed motif with an entirely new artistic technique involving wet paper pulp and vivid coloured dye.

T he sale was anchored by one of the most important and comprehensive collections of works spanning the 19th and 20th centuries, encompassing artists working in different styles and media, but all concerned with the same crucial questions about representation. Notable highlights include Pablo Picasso’s tender and intimate 1931 portrait of Marie-Thérèse Walter Femme endormie which sold for £7.3 million, and Fernand Léger’s 1914 Nature morte which found a buyer for £12.2 million.

Other notable works in the collection include a sculpture, Femme debout, by Alberto Giacometti and Kandinsky's Murnau - Schloss und Kirche II (Murnau - Castle and Church II) which sold for £10.6 million and £1.3 million respectively.

Bronzes by Giacometti and Henry Moore from this collection underline the different approaches that artists took: Moore’s abstracted figures drew on the natural world, whereas Giacometti turned to man’s inner psyche as inspiration for his highly-stylised figures. The collection was 100% sold and achieved £44.7 million.

Louise Bourgeois, The Architecture of Memory

Comprising works of sculpture that narrate the earliest phases of her ascent as an artist in New York, through to the fabric pieces and emotive gouache works which bespeak a reflective ‘Old Age’ style, the collection was put together by European collectors and together delivers a nuanced insight into the grand legacy that Bourgeois left behind.

In contrast to the Surrealists such as Ernst, Dalí, and Breton whose works exoticised the female hysteric, and Dorothea Tanning’s anatomical aberrations in streamlined soft form, Bourgeois’s unwieldy and macabre rag-dolls invoke an overriding sense of pain and suffering – a pronounced trait of the artist’s late work. The 2004 sculpture Arched Figure sold for £1.2 million, and additional works from the collection are still available for bidding in the Contemporary Art Day Sale. 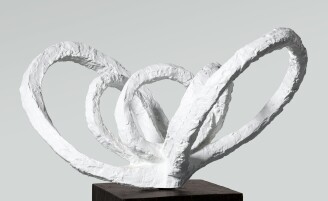 Contemporary Art
Louise Bourgeois, The Architecture of Memory: Works from a Private Collection

E lsewhere in the sale, there were a number of auction records set, with Henri Laurens's 1920 cubist composition Le Boxeur one of the notable examples, selling for six times its high estimate at £2,055,000.

The strength of sales for British art was reinforced when Orpheus (Maquette I), a sculpture by one of Britain's most important Modernists, Dame Barbara Hepworth, provoked a bidding war on the phones and in the saleroom, driving the price up to nearly four times its estimate, soaring to £1.2 million. Alongside this, Cedric Morris' Cabbages made its auction debut for a record-breaking £350,000.

Casting back to the Dutch Masters, Bellotto's recently-restituted Dresden, A View of The Moat of The Zwinger has remained relatively unknown for much of the 20th century, but this evening burst on the scene and rose significantly past its estimate to £5,437,400.

This monumental cross-category sale ushers in a new era for Sotheby’s; leading the way in saleroom innovation in the global marketplace, and achieving a total of £149,730,290.

As this first-of-its-kind marquee sale draws to a close, the summer season continues throughout the week with the last few days of bidding in the online Day Sales for Old Master Paintings and Drawings, Impressionist and Modern Art, Modern and Post-War British Art and Contemporary Art.

Explore the Top Lots from the Evening

Explore Other Sales Open for Bidding this Week