Print and Process: Jasper Johns at the Walker

J asper Johns, who The New York Times described in 2018 as America’s “foremost living artist”, is once again back in the limelight. To mark the artist's 90th birthday, exhibitions exploring every aspect of Johns practice are set to open across the US: from a retrospective of his drawings at the Menil Drawing Institute last winter, to this autumn’s ambitious survey taking place across both the Whitney Museum of American Art in New York and the Philadelphia Museum of Art. Joining this cohort is An Art of Changes: Jasper Johns Prints, 1960–2018 at Walker Art Center, which brings together around 90 works that trace the way Johns used print to experiment with imagery from 1960 through to the present day.

There are few artists whose work can truly be termed “iconic”, but Johns is one of them. So deeply ingrained are his flags, targets, numbers, hatchings and skeletal figures in the public consciousness, it can almost feel like they have existed forever. Yet the truth, says curator Joan Rothfuss, is quite the contrary. “We are focusing on his habit of revising, recycling and reconfiguring the motifs that he's used in his painting and sculpture,” she says of the show, which will also include four paintings and two sculptures. “You can look at Johns's work over a period of decades and find ways that the images link together in surprising fashion.”

Drawn almost entirely from the Walker’s own holdings and split into four thematic sections, An Art of Changes traces how Johns’s confidence and technical innovation "increased exponentially” over his long career. Beginning with his earliest print – a simple lithograph of a target from 1960 – it will show familiar motifs chopped and changed in lithographs, screenprints, linoleum cuts and more, together embodying the stylistic progression of Johns’s “one-man movement”, as Rothfuss describes it. Even entire paintings are reinterpreted, as seen in the two intaglios of 1955’s Target With Four Circles, dated 1979 and 2017. “He'll take a painting, take pieces out of it, look at details,” Rothfuss says. “And you get a different sense of what the whole thing is.”

“You can look at Johns's work over a period of decades and find ways that the images link together in surprising fashion.”

Central to the works on show is Johns's desire to “really look into the way that two-dimensional works can function,” Rothfuss says. Few of the artist's motifs capture this more effectively than his hatchings – abstract patterns that cater to his interest in “doubling, mirroring, layering, splitting open, rotating”. Examples are found in Scent, 1975–76, a work made up of three connected panels formed using different techniques (lithography, linocut and woodcut), and Between the Clock and the Bed, 1989, which is named after a painting by Edvard Munch and nods to Johns's art-historical interests. “He's looking at the precedence in art history,” the curator says of the later work. “He has [also] quoted a lot from Picasso, Hans Holbein, Matthias Grünewald; he's very much placing himself in that trajectory.”

So potent is Johns’s imagery that it is tempting to search for philosophical or political meaning within it, especially in an US election year, when "there's a lot of talk about what it means to be an American”, says Rothfuss. We can recognize a heightening of this impulse in recent, unusually personal works. Rothfuss links Untitled, 2018, one of Johns's "skeleton" pieces, to another enigmatic set of works on display: 1987’s Seasons. “He seems to almost bring it into the afterlife,” she says.

However, as Rothfuss explains, to search too deeply for answers in Johns’s work is to misunderstand him as an artist. For Johns, meaning and subject matter have always been secondary; it is the expressive, expansive potential of images themselves that he cares about most of all – and nowhere does he explore this more freely than in his prints. 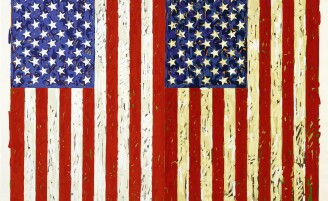