By Greg Morrison
Peter Doig is one of the world’s most acclaimed living artists, with his works regularly achieving eight-figure sums at auction. So the fact that his latest commission – on view until 16 June – is not for a private collector, but is being shown in public, is big news.

S cottish-born Doig has filled one of the three gallery spaces at Secession Vienna with more than 15 entirely new paintings. The Secession – which was founded in 1897 by Gustav Klimt – focuses on exhibiting works that have not been shown before. President of the Secession, Herwig Kempinger, feels this injects a frisson into their programming, which has recently included shows by Ed Ruscha and Laura Owens.

A fortnight before the opening Herwig Kempinger did not yet know the exact number, size or indeed subject matter of the expected works, something he relished. For the past six months Doig has been based in his studio in Trinidad, immersed in creating the work. “We don’t curate shows per se; once we’ve decided upon an artist, we more or less hand over the space and tell them ‘OK, go wild’,” says Kempinger.

The show sees Doig retain his fixation upon recurring symbols, including spearfishermen, lions and canoes. Swimming-costumed figures, previously explored by Doig in works such as Red Man (Sings Calypso), 2017, reappear in Bather (Night Wave), 2019, and Bather (Sings Calypso), 2019. It is this consistent yet evolving subject matter that Kempinger enjoys:

“I’d say his approach is a really classical one, and that is what I find interesting, that this is something that still astounds or fascinates the viewer.”

Born in Scotland, Doig has spent his life living between Trinidad, Canada and London. In addition to his own peripatetic life, Doig draws inspiration from art history, family snapshots, books, newspapers, magazines, postcards and film stills. 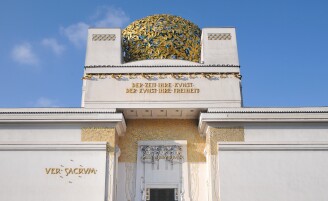 Between solitary figures, Modernist architecture, yellow walls and Trinidadian foliage, Doig’s work embodies an unmistakable style. Lone forms, such as those found in Untitled (Wheelchair), 2019, or Shadow, 2019, are often rendered with vivid simplicity. Sections of thick, cloying impasto, like those that cover the middle ground in Bather (Sings Calypso), 2019, contrast with the evocative washes of paint that cover the foreground. “What is fascinating about his work is the perfect equilibrium of precision and neglect,” Kempinger says. He feels it is this approach that grants the viewer access to Doig’s works, allowing the eye to wander through them.

It is with dream-like narratives that Doig has amassed such popular and critical acclaim. Each work depicts a scene filled with motifs, some – like the figure behind the bars in Lion (Fire Down Below), 2019 – so subtle they only reveal themselves after scrutiny. His works appear simple, yet court shifting interpretations. “Some are on the verge of abstraction, some show you moments of little stories whose beginnings and ends we will never know,” says Kempinger. 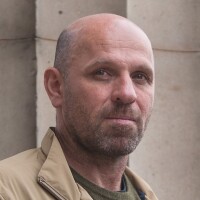 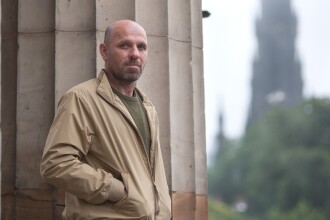