Old Masters for the Digital Age

N ew York creative duo Molly Young and Teddy Blanks set about creating their own emoji sticker pack when they felt what was already on offer didn't allow a satisfactory range of emotions, and that subtleties were often lost in digital translation. As passionate art collectors as well as artists, they took inspiration from the Dutch Masters and developed a set of emojis that present contemporary interpretations of the work of artists such as Frans Hals and Lucas Cranach the Elder. We caught up with Molly ahead of the Old Masters Evening Sale and Day Sale at Sotheby's, London on the 7 and 8 December to discuss facial expressions, the thrill of buying at auction and drawing inspiration from historical works of art.

Mariko Finch: When did your fascination with Old Master paintings first begin?

Molly Young: Hard to say when it began, but it reached a fever pitch when Babyman was introduced to my life. Babyman is my name for a portrait that went unsold at auction; he made his way to New York City in a wooden crate after a specialist at Sotheby's kindly arranged a sale. He now hangs in my bedroom and smiles menacingly over my sleeping body every night.

CREMONESE SCHOOL, 16TH CENTURY, PORTRAIT OF A CHILD IN AN INTERIOR, LEANING AGAINST A TABLE, HOLDING A PORTRAIT OF A MAN, BOUGHT BY MOLLY YOUNG THROUGH SOTHEBY'S, LONDON IN 2014.

MF: You mentioned that you like watching auction live-streams. What is it that excites you about them?

MY: Nothing can replicate the electric ambience of a live auction, but the online version provides a dose of the same tingly anticipation that you feel in the room. Plus, there’s always the chance that we could be possessed by a demon to hit the “bid” button and do something irrevocable. It's a thrilling possibility.

MF: What does collecting art mean to you?

MY: Collecting art means surrounding myself with pieces that are as virtuosic as they are weird. These are the criteria required to excite my eyes and brain. (True weirdness is almost as rare as virtuosity). I am currently loving the melancholy pin-up paintings of Walter Robinson, whom Peter Schjeldahl described as "a Manet of hot babes and a Morandi of McDonald’s French fries".

A SELECTION OF STICKERS OF EMOJIS FROM THE REJOINDERS STICKER PACK.

MF: You are a writer, creative director, artist and designer, and this project has seen you making inroads in the to the tech world. Where do you gather – and store – your inspiration?

MY: We each straddle many different worlds—Teddy designs book covers, creates movie titles, and directs short films and commercials.  I work as a director at Warby Parker, write for the New York Times and am the in-house crossword constructor at Kinfolk magazine. Exposure to a wide jumble of influences has been conducive to creative mischief.

MF: Why emojis? Did you enjoy the playfulness of combining artworks that are hundreds of years old with  a very current technology?

MY: Like most people, Teddy and I use emoji as a supplementary form of expression. The standard set of emoji is fine, but it's not exactly subtle. We use the Old Master emoji to convey a wider, starker, more virulently passionate range of human emotions. We think of them as emoji for adults — perfect for delighting friends and terrifying enemies.

MF: Do you collect across categories (contemporary, photography, design, furniture) and if so, how do these exist side-by-side in your home?

MY: I collect works on paper and they exist in contentious harmony.

PAINTINGS BY FRANS HALS AND UNKNOWN USED AS PART OF THE REJOINDERS PACK.

MF: Which of the expressions do you use most often?

MY: Specialists at The Mauritshuis in The Hague recently reached out to suggest that we include a 1670 Jan Steen painting from their collection in our app. The suggested painting features an exceptional crying toddler and we were delighted to transform the little guy into an emoji. The image of a sobbing infant has been especially useful in recent times.

BERNHARD STRIGEL'S SLEEPING GRAVE GUARDS WITH MACE AND SWORD REIMAGINED AS AN EMJOI.

MF: What other projects are you currently working on?

MY: Our latest project together is a print called the Periodic Table of NYC Trash, which is a scientific array of the world's finest waste that we assembled over several months in New York. Will Shortz called it "Ingenious! In a trashy way, of course." We recommend hanging it in the bedroom for maximum effect.

We asked two Sotheby's specialists from the Old Master Paintings department to pick their favourite sticker from the Rejoinders emoji pack...

I have never found that traditional emojis capture my cynicism satisfactorily, so I cannot get enough of these Old Master stickers. My favourite is the cutout of Anna Cuspinian by Lucas Cranach, she's my go-to whenever a withering response is required. Her portrait forms a pair with that of her husband, the historian Dr. Johannes Cuspinian and the paintings were probably commissioned to mark their nuptials. When you see the two side by side, Johannes gazes skyward, apparently lost in high-minded contemplation, while Anna seems to be glaring right at him from the other canvas, pursed-lipped, and looking less than impressed with her new spouse.

I like the Carpaccio. It is a look mixing suspicion with elevated disdain that says: ''You're gonna have to do better than that''. It is also a great emoji for those days when you wash your hair by mistake with your wife's 'volume enhancing' shampoo. Not even a bulbous beret can hide your error. 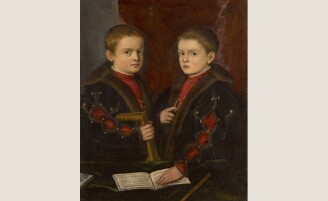 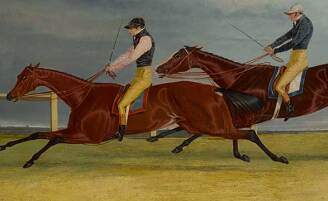