NEW YORK – Andre Iguodala has enjoyed quite a year. Fresh from winning the 2015 NBA Championship and being given the Finals MVP award, the Golden State Warriors swingman will be playing in the 2016 Finals this week. But Iguodala has also made a strong impression off-court. Named as one of Sports Illustrated's 50 Most Fashionable Athletes, he has quickly earned a reputation as one of the most stylish men in the NBA with a special affinity for collecting fine watches. Ahead of Sotheby's Important Watches auction, we spoke with him about his fashion evolution, top watch brands and which pieces from the upcoming sale stood out.

How would you describe your personal style?
My personal style varies; I love to wear suits, but also love wearing fitted sweatpants and sneakers. I like to look just as good dressing up as dressing down. My interest in designers is absolutely all over the place!

In addition to being a world-class athlete, you’ve developed a reputation for being incredibly stylish off-court. How has your sense of style evolved throughout your career?
I came into the League like every other athlete. We all love to look good, but there are different levels to fashion. I believe it starts with self-expression. Once you know who you are and how you want to look from inside out – or shall I say "express yourself" – you can develop a personal style. My personal style has evolved from basically wanting to look "good", to becoming extremely personal to me. It's a true expression of how I'm feeling at the moment.

How did you first get into collecting watches?
My business advisor Rudy Cline-Thomas has been incredibly helpful in providing insight on buying and collecting not only watches, but art and in business as well. Initially, I began with buying Rolexes with diamonds all over them, and over time with the information I learned from Rudy and my watch dealer in Chicago who began to educate me on the differences in brands, movements and value, I became totally hooked on the movement of pieces and started collecting.

What watches are you wearing right now? Any all-time favourite brands or styles?
Audemars Piguet, Panerai, Rolex, IWC and Ralph Lauren. My favorite brands are AP and Richard Mille.

You won the NBA Finals MVP award in 2015 – do you have an MVP in your watch collection?
Sure do – my 2012 Rolex Platinum Masterpiece!

What qualities do you look for in a great watch?
Aesthetic, movement, and I'm more focused on vintage now than ever. 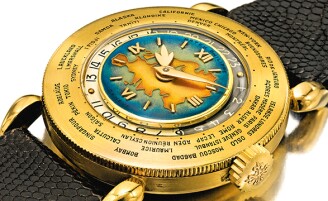