New York
Throughout art history, mothers have served as both muse and model – ranging from Old Master icons of the Madonna and child, to Contemporary works by artists such as Louise Bourgeois. Here, we spotlight one such homage: an early 20th-century artwork by American artist Mary Cassatt, entitled 'Children Playing with a Cat'. The work is available for immediate purchase through Sotheby's Private Sales department.


A merican artist Mary Cassatt (1844-1926) earned renown in the early 20th century for her depictions of mother and children. Beginning in 1905, Cassatt experimented with the three-figure composition when she created two tondo murals for a competition to decorate the new Statehouse in Harrisburg, Pennsylvania, close to her childhood home in Lancaster County. One of these tondos, Mother and Two Children (in the collection of The Westmoreland Museum of Art, Greensburg, Pennsylvania), is the inspiration for the present painting.

Children Playing with a Cat exhibits the gentle warmth and familial tenderness characteristic of Mary Cassatt's most successful mother and child paintings. In it, Cassatt creates natural, yet physically compressed figures, so that they conform to the tondo shape by taking up as little space as possible. But for Cassatt, the confines of the tondo shape prove inspirational, rather than hampering: Cassatt opens the composition to allow both the mother and infant to sit upright, and to give them and the little girl their own space. The combination of its charming intimacy, large scale and complexity of composition place it among her most important works of the 1900s.

The model for the mother is Renée Chauvet, a woman from a village near Cassatt; Chauvet was a favorite whom Cassatt also portrays in Young Mother and Two Children (currently in collection of the White House, Washington, DC, US), as well as in other paintings depicting maternal affection during the period 1905 to 1910.

"Cassatt conferred on the feminine a greater degree of realism, for she subtly represented the structures of the world of women, the artifice and the process by which the child was made the feminine woman"

Because the older child in each of these works is female, hence, woman-to-be and potential mother, it is possible to interpret the variation on the theme of mother and child as a rite of introduction to maternity (Frank Getlein, Mary Cassatt: Paintings and Prints, New York, 1980, p. 140). As Griselda Pollock explains, "Cassatt conferred on the feminine a greater degree of realism, for she subtly represented the structures of the world of women, the artifice and the process by which the child was made the feminine woman" (Mary Cassatt, New York, 1980, p. 23).

Cassatt was never a mother herself, remaining unmarried until her death in 1926. However, Cassatt's own mother, Katherine, had a profound effect on Mary, as evidenced in the memoir of Louisine Havemeyer, a longtime family friend:

"Anyone who had the privilege of knowing Mary Cassatt's mother would know at once that it could be from her and her only that she and her brother, A.J. Cassatt, inherited their ability. Even in my day, when she was no longer young, she was still powerfully intelligent, executive and masterful and yet with that same sense of duty, that tender sympathy that she had transmitted to her daughter Mary." 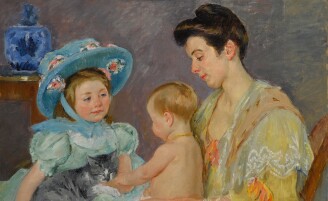 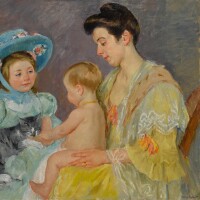 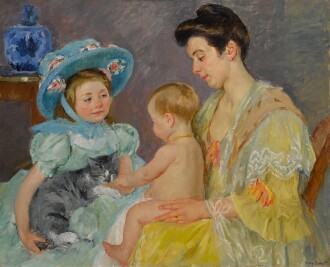