There is symmetry in the universe — at least in the movies. This fall, Damien Chazelle, the acclaimed director of La La Land, premiered First Man, a cinematic telling of the legendary 1969 first journey to the moon, with Ryan Gosling starring as a nuanced Neil Armstrong. Captured in the meticulously crafted film, the influential NASA Art Program allowed one artist, Paul Calle, access to the morning of the historic moon launch. That day Calle made on-the-spot sketches of the moments leading up to liftoff, including the crew breakfast and suiting up of astronauts Neil Armstrong, Buzz Aldrin and Mike Collins. To play the part of this witness to history, Chazelle tapped none-other than the artist's own son and fellow illustrator, Chris Calle. We spoke with Chris Calle about the unique experience playing his father as well as the importance of his father's sketches, a selection of which will be offered in Sotheby's upcoming Space Exploration auction (29 November, New York).

Can you tell me a bit about your father, the illustrator Paul Calle, and how he became involved in NASA’s Art Program during the 1960s?
My Dad grew up in New York City and went to Pratt where he studied to be an illustrator. He made some science fiction work, scratchboard for magazines like Amazing Stories, to illustration for Time magazine covers. During the early 1960s for the last mission of Project Mercury, Gordon Cooper’s flight, eight artists, including my father, were selected as part of NASA’s newly formed NASA Fine Art Program. These original eight guys covered the last Project Mercury launch and then all the activities throughout the Gemini program. This culminated in the Apollo missions, where my Dad was the only artist present for the morning of the launch for the crew breakfast, suiting up and crew walk out. That’s when he did these really amazing pen-and-ink drawings of Armstrong, Aldrin and Collins. In the years after, my Dad went on to design over 30 postage stamps for the US postal service. The most well known is the 1969 First Man on the Moon stamp. It’s an iconic image that stamp collectors and non-collectors are familiar with. For the last decades of his career, my father went on to depict scenes of the American West.

That’s quite a career trajectory. You’re also an illustrator and have designed stamps for the US Postal Service. Did you set out to follow in your father’s footsteps?
I went to the University of Michigan for illustration and likewise began with editorial work. My first job was with Reader’s Digest and then about a year out of college I sent my portfolio to the Postal Service. And that started for me a similar path in the philatelic world of designing stamps. Dad designed the 1969 stamp and in a moment of brilliance the US Postal Service had me design the 20th anniversary stamp in 1989. Then in 1994, five years later, for the 25th anniversary, my father and I were asked to collaborate on the design two stamps, which was a wonderful experience.

Now you’re playing your father in Damien Chazelle’s First Man. How did that come about?
Out of the blue someone at Universal Pictures contacted me saying that they would like to feature my father’s artwork in the film. I knew the movie was being made, but had no idea that they had any intention of incorporating my father, so I wrote back saying this was great news. A few weeks later, I received another email, much more formal in tone, explaining that Damien Chazelle would like to hire an actor to play my father. I thought about it over night and in the morning responded with a few brief anecdotes about my Dad’s time at NASA and with the moon launch. The last line of the email was, "If you’re going to hire an artist to play Paul Calle why not use someone who knows everything about Paul Calle; who’s an artist like Paul Calle; who can sketch like Paul Calll, and who has the sketchbook and the pens that Paul Calle used in 1969 during the crew breakfast and suiting….I can be in Atlanta anytime you need me.” It only took an hour to get a call asking me if I was serious. In the meantime, I called Rick Armstrong, Neil Armstrong’s son, who is a friend of mine and was a consultant on the film. I explained what was going on and said any help you can give I’d appreciate it. The casting director called me back soon after and said we’re shooting next week.

What was it like being on set? You appear sketching in the crew breakfast scene.
The call was about 5 o’clock in the morning, which I realized now was around the same time my dad was actually sketching. I was probably as nervous as he was too. Sketching live is a real pressure. I can’t imagine how courtroom artists do it. I’ve seen videos and photos of that morning and the set was identical, down to the smallest details of the pictures on the wall. The attention to historical accuracy was incredible. I went to where we were meant to be filming and was wondering how I was going to position myself in the room when from the corner of my eyes I notice Damien Chazelle. He looks over, smiles, comes over to me and says, “Chris, this is so great that you’re here. We’re honored that you’re here.” It was really my honor that he allowed me this chance. A while later, I see Ryan Gosling. Ryan Gosling!. He walks behind Damien and everyone and continues talking and when Damien noticed him he turns and says “Ryan, this is Chris.” He didn’t even say Calle and Ryan says, “Chris this is so great I just found out that you’re playing your father!” I was blown away that from the casting director to the costume director to the person that cut my hair to Ryan Gosling, everyone was as excited that I was there as I was excited to be there. 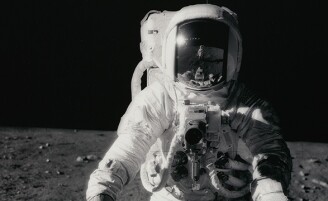 Did you father have any special memories of that morning?
Yes — at the breakfast table that morning Mike Collins came over and wanted to look at his sketches. My dad was amazed. Here is Mike Collins about to go to the moon and he takes the time to look at the drawings.

Another story was that when he got to the second security checkpoint entering the building that morning his name wasn’t on the list. The photographer, who my Dad had gotten to know, was with him and told him he would go inside and figure it out. My dad was terrified that he wouldn’t be able to get in and while he was waiting nervously made these horrible sketches of the security guard. After a few minutes, Deke Slayton, came out and looked around and told the security guard, “Ok, he’s with me,” and waved him in. Recently, I found the sketchbook of my dad’s with those security guard drawings. Maybe they weren’t horrible but you can tell how nervous he was.

Why do you think it was important to NASA to have an artist present?
In my book about my father's art, Celebrating Apollo 11: The Artwork of Paul Calle, I included a quote from Hereward Lester Cooke, the then curator of Painting at the National Gallery in Washington, who perhaps best summed up the aspirations of all who had taken part in this program when he wrote, “Perhaps this project will help to prove to future generations that the United States in the 1960s produced not only engineers and scientists capable of shaping the destiny of our age but also artists worthy to keep them company.”

I realize now the importance of the breakfast scene in the film. At its core it’s a story about Neil Armstrong, a man who did something incredible — an amazing fete of going to the moon, but along the way there was loss and sacrifice. It is about his internal, human journey. And that morning, here are bunch of guys about to go change history, but they are still doing something that people do every day — eating breakfast. I think that’s why NASA invited artists to cover these events. Artists see the world and put it down in paint, pencil, on paper, in the sand, wherever, in a unique way with an individual perspective. Going to the moon was an amazing, technological fete that NASA connected right back down to earth, and the individual, with the artist creating by hand. 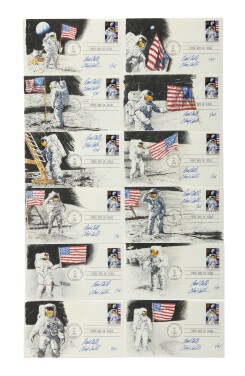 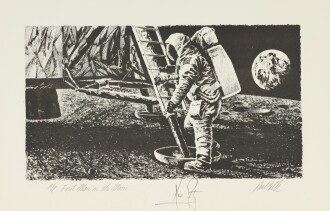 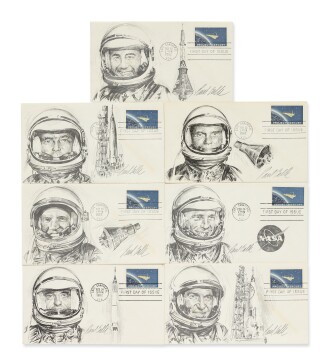 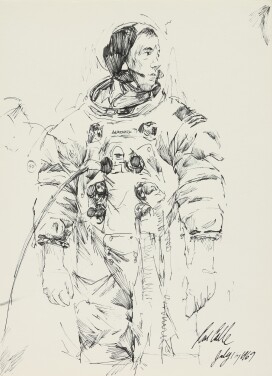 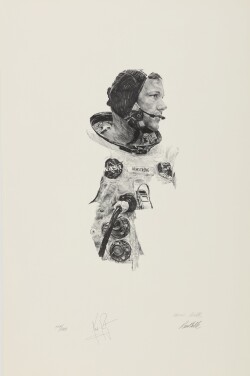