By Melissa Goldstein
LA-based Nathan Turner is one of the three leading designers starring in Working The Room , a highly anticipated home makeover television series. He speaks to Melissa Goldstein about his fervent collecting habits and why he places history at the heart of his practice.

True to his deep West Coast roots, Nathan Turner embeds the California Dream into his nostalgic, layered interiors. The author, designer and culinary enthusiast hails from the San Francisco Bay Area, where an idyllic childhood set against the backdrop of a Mid-century Modern home overlooking the water and a rustic family ranch outside the city informed his current urban-meets-bucolic existence (he and his significant other, decorator Eric Hughes, reside in a condominium in West Hollywood, a Ray Kappe 1960s landmark, and recently acquired a 1930s ranch house in Ojai). It’s Turner’s mastery of an “undecorated” aesthetic, blending natural materials with a mix of traditional furniture, modern art, vintage objects and eclectic textiles, that has won him a devoted following. Last year he followed up his 2012 tome Nathan Turner’s American Style with I Love California, a travelogue-meets-entertaining-meets-decorating book, which juxtaposes recipes with interiors and inventive tabletops arrayed up and down the coast. “I grew up in very quintessential California environments,” says Turner. “So that all just plays into what I do and what I like, and who I am.”

You are known to be a prolific collector. Can you give us a shortlist of your personal favourites?

I’m a collector – slash hoarder. For me, collecting is not about prestige or preciousness, it’s about things that I actually want to use and see. Growing up, my great grandmother had a cousin back in Whitby, England, and instead of sending postcards to each other, they would trade these little 5in by 7in and 8in by 10in oil paintings. I have a bunch of those paintings, they’re these adorable English seascapes. I also collect Grand Tour photographs, and I could fill a whole house with those 1880s sepia-toned photos – usually of English people on the continent studying all of the classic architectural gems. I’m also a rabid collector of hotel silver because I entertain all the time. And I’m a big collector of Mexican and Californian pottery. It’s getting to be a problem.

Pared back interiors are enjoying popularity right now – how does that sit with you?

I live with somebody who favours that. Eric [Hughes] is a decorator himself, and likes a cleaner look – though I usually win. If that’s what makes you comfortable that’s cool, but I honestly couldn’t do it because I’m a lover of objects. It’s who I am in my DNA.

"For me, collecting is not about prestige or preciousness, it’s about things that I actually want to use and see."

Where do you find your inspiration?

Cities do that for me. Mexico City blows my mind constantly. I’m really drawn to cities with a crazy complicated history, like Palermo or Istanbul, with that feeling of multicultural layers that are so embedded into the culture, where you see it in the architecture and in the food and in people’s faces. I’m fascinated by the Japanese and Chinese influences on Mexico City, or the Moorish and Norman cultures on Palermo. And that is how I decorate: I love bringing in things from different time periods and places and seeing them all cohabitate.

"And that is how I decorate: I love bringing in things from different time periods and places and seeing them all cohabitate."

Are there certain vintage pieces you find yourself returning to in your projects?

I’m always looking for interesting, one-off things. But there are certain styles of furniture I always plug in to if I’m doing a search: I love Empire furniture and English Jacobean chests – things that, oddly, translate well into the California vibe. I am always searching for an old object turned into a lamp, or an old ceramic pottery lamp from the 1960s.

Who are your design heroes?

It’s so far from the way that I live and decorate, but I love those iconic fashion guys: Bill Blass and Hubert de Givenchy and Valentino. It’s an era gone, and they had the whole picture of style, from what’s on your table and how your table is dressed to your house and how you’re dressed – those guys embodied that. They lived an ultra chic life and it’s something that’s I aim to do in my laidback, funky California way. 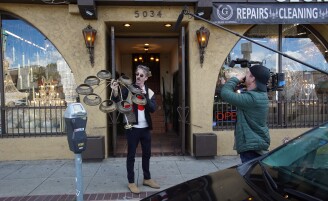 You have a very specific signature aesthetic. How would you describe what your clients are coming to you to create?

I think they’re coming to me for a collected, slightly non- decorated look. I had a client boldly tell me: I want you to make it look like I’ve had this money I made yesterday for 100 years. And that I can do. Because I use almost all antiques and vintage – it just feels better to me. I was like, “I like your honesty, let’s do it.” 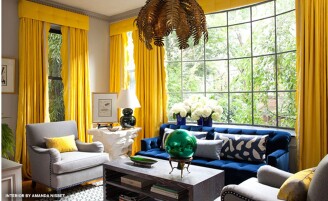 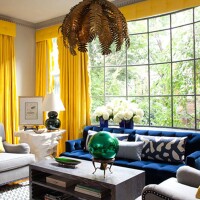 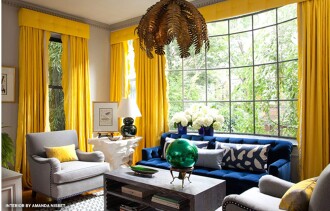