By Alexander Morrison
“A man is standing in a field under the blazing sun, the mistral is blowing, he is grinding his teeth and struggling in front of his canvas.” Curator Dorthe Juul Rugaard is describing the Kirk Douglas version of Vincent van Gogh in the 1956 film Lust for Life. It’s just one aspect of the myth of the Dutch artist that she seeks to address in the landmark show at the Arken Museum of Modern Art in Ishøj, Denmark.

T he show conveys a more nuanced perspective than Douglas’s portrayal and, along with the Tate Britain’s UK-focused take on the artist, due to open this spring, it shows that there’s still plenty of scope for major institutions to continue to explore the life and work of van Gogh.

Van Gogh at the Arken museum is the first solo exhibition of the artist’s work held in Denmark for more than 50 years. It brings together 28 paintings and 11 drawings from the Kröller Müller Museum in the Netherlands and will focus on van Gogh’s interest in nature, spirituality, and humanity’s place in between. Van Gogh in Britain, meanwhile, will show more than 40 works that shed light on the inspiration he drew from British culture and his influence on British artists such as David Bomberg and Francis Bacon.

Van Gogh is best known for his time spent in Arles in the South of France, where he painted vivid landscapes using thick, frenetic brushstrokes. These works betray van Gogh’s close interest in nature, which can be traced back to his youth. “As a child van Gogh collected insects and birds’ nests, and he knew all the Latin names of flowers,” Rugaard says.

Religion was also important – van Gogh was the son of a protestant pastor and spent many years aspiring to become a priest, only to be rejected by the Dutch Reformed Church. But rather than abandon his faith, Rugaard argues that van Gogh redirected it. “His religious upbringing has its roots in Calvinism, where the idea is that God is not only present in the church, but also in nature,” she says. “[The Arken exhibition] is really a story about a religious artist who moves away the institutional church towards a more personal religion based in nature.”

In The Sower, 1888 a peasant strides across a plowed field, with a large yellow sun setting on the horizon. “Van Gogh identifies with the figure in this painting – the sower from the Biblical tale,” says Rugaard. “But it is also for him the ultimate symbol for eternity and man’s simple and harmonious relationship with nature.” Elsewhere, a small study of a patch of grass betrays his love for a country with a culture renowned for its respect for nature – Japan.

He knew Japanese prints, and he was very taken by the idea of studying a single blade of grass. [This work] is almost a Buddhist, meditative focus on the microcosmic path of nature.

From 1873, van Gogh spent three years in London. This began in a run-down flat on Hackford Road in Brixton while he was working for the Covent Garden branch of art gallery Goupil & Cie. This experience, as Tate’s Van Gogh and Britain exhibition will show, had a great impact on his future career. “He would go to museums – the National Gallery was five minutes down the road [from Goupil & Cie]. It [the National Gallery] had enormous influence on him, particularly some years later when he set out to become an artist,” says Martin Bailey, a van Gogh expert and a co-curator of the Tate show. It was at the National Gallery that van Gogh saw Avenue at Middelharnis by Dutch artist Hobbema, a painting depicting an avenue of trees that will be on show at Tate. Bailey explains it:

made a deep impression on van Gogh, who loved in his early years particularly depicting avenues of trees because they gave a sense of perspective to a painting.

It is also in this gallery that visitors to London today can find van Gogh’s Chair, 1888, which, while not on show in Van Gogh and Britain, betrays, according to Bailey, the influence of two Victorian figures. “There’s a famous illustration done by [artist] Luke Fildes, of [writer Charles] Dickens’s empty chair, and the message of that illustration was: ‘when we die our chair remains empty’. When van Gogh depicted his own chair, I think he was inspired by that illustration.”

Van Gogh eventually fled south to Provence, where his myth was cemented for generations. Along with sun-scorched Arles, van Gogh spent time in the asylum in St Rémy, capturing scenes such as The Starry Night, 1889. In September of the previous year, van Gogh had written to his brother Theo: “When I have a tremendous need for, shall I say the word — for religion... I go outside at night to paint the stars.” 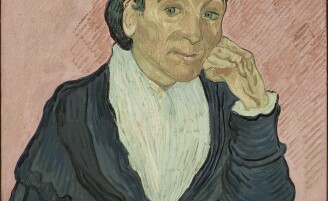 Martin Bailey is the author of Starry Night: Van Gogh at the Asylum, which was published by White Lion on 27 August