W hen Chinese designer Guo Pei first began studying in the early 1980s, “no one [in China] vaguely knew or understood the concept of fashion design”, she says. Flash forward nearly 40 years, and she is one of the most prominent names in the business, her intricate and elaborate couture having graced magazine covers, exhibition halls and runways at home and across the world. Now, she will bring her talents to Sotheby’s, tapping into one of her closest interests.

In London, the GOLD: The Midas Touch exhibition will bring four of Guo’s couture gowns together with objets d’art, contemporary artworks, Asian and Indian art, photographs, sculpture and more, exploring our enduring fascination with the precious metal. Among the objects included will be two golden horse heads delicately crafted by American sculptor Herbert Haseltine. Guo Pei’s work will also be celebrated at Sotheby’s New York in September, where her spring 2019 couture East Palace collection will be exhibited for the first time as part of Asia Week – a series of sales celebrating Asian art spanning 4,000 years of history.

"From architecture to clothes and art, gold is indispensable"

Gold is a substance of great personal and symbolic importance to Guo Pei, who has incorporated its properties into many of her designs. This includes numerous pieces she has laced with 24-carat gold thread, and the Imperial yellow cape worn by Rihanna at the 2015 Met Gala – an event that launched the designer into the international spotlight. “From architecture to clothes and art, gold is indispensable,” she says.

The hue also plays into another of Guo Pei’s close interests: history, particularly as it relates to royalty and power. “[Gold carries a] unique royal legend,” she says. “It represents the supreme Imperial power and the pursuit of the ultimate attitude.” This reverence for the past was instilled within her by her grandmother, who was “deeply influenced by the costumes of the Qing Dynasty”. From childhood, she told Guo Pei “vivid stories of a traditional yet extravagant beauty” that inspired her to begin her own journey into the world of design.

That journey began at the Beijing Second Light Industry School, where Guo Pei enrolled in 1982. Entering what was then almost unknown territory in China, and facing resistance from her parents, she “was not optimistic” about her chances of making it. But she persevered, and soon became one of the country’s first generation of fashion designers: launching her own label, Rose Studio, in 1997, and hosting her first couture show, Samsara (Life cycle) at China International Fashion Week in 2006. Two years later, her commissions were on the world stage as part of the Summer Olympics, the most talked-about being a dress worn by singer Song Zuying during the closing ceremony that was embroidered with 200,000 Swarovski crystals.

From the very beginning, a defining feature of Guo Pei’s work has been the way she brings her Chinese heritage together with contemporary Western design. From corseted kimono dresses to trousers adorned with silver dragons, she merges the styles, symbols and stories from different places and times to form her own unique design language. “Of course, there are cultural differences, and I take into account the overall visual aesthetics of the audience... but the pursuit of beauty is similar regardless of country and culture,” she says. In this pursuit, she often draws on eternal themes, such as nature and the life cycle, as seen in a dress that appeared in the couture fall 2019 runway show, which is shaped like a bird’s nest, complete with gold-beaked blackbirds, eggs and embroidered feathers. “From nature, one finds epitomes of human destiny and the philosophy of life,” she says. Gold has an integral part to play in this too, she adds. “I often use gold to express the sun and the earth; it symbolises eternity and selfless dedication.”

All of these ideas Guo Pei brings to life with an almost obsessive eye for detail. She describes how her pieces are “derived from a thorough research process, [and] accumulated years of craftsmanship and experiences”, and how her husband’s family’s background in textiles has helped her forge a love for luxury materials. She often spends years working on a single item, employing the help of her team of 500 artisans to help carve out its hidden details and features. While such an approach requires patience and a willingness to challenge oneself, it is, for Guo Pei, part and parcel of making couture. “Couture design is a long-distance runner, constantly breaking through boundaries and seeking new technologies,” she says. “It is not as simple as ready-to-wear, nor is it quickly forgotten. It is like a life force.”

Epitomising this life force is Xiao Jin (Little Gold), one of the four dresses by the designer to be displayed with the GOLD: The Midas Touch exhibition. Formed out of a metallic fibre thread and Indian metal wire embroidery, it took more than 40,000 hours to craft. Its design, which is inspired by Tibetan Buddhism, is brought into three-dimensional life using techniques such as padded embroidery.

A longer version of Xiao Jin, Dajin was on show at the Met’s 2015 China: Through the Looking Glass exhibition, which accompanied the gala and put Guo Pei’s name on the tip of every fashion influencer’s tongue. In the years since, the designer has gone from strength to strength. In 2016 she was named on the Time 100 list, she was the first Chinese designer to take part in Paris Couture Fashion Week, and she is the first Asian guest member of the Chambre Syndicale de la Haute Couture. This year, she was the subject of exhibitions at Bowers Museum in Santa Ana, California and the Asian Civilisations Museum in Singapore. 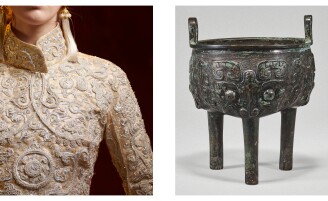 GOLD: The Midas Touch represents an opportunity for Guo Pei to make her latest mark in Europe. She approaches the task as an avid collector herself – of furniture, porcelain, and vintage cheongsams – and she will use this discerning eye to place her gowns in dialogue with objects stretching back over millennia. Each of these objects share a universal timelessness only gold pieces can possess, and she aspires for her designs to have an equally lasting importance. “I imagine them to be part of a palace’s treasures, withstanding the test of time,” she says. “Regardless of the era one is in, I hope people will see and feel the work that goes into them.”