A s the international art world looks forward to the October opening of the Fondation Louis Vuitton’s exhibition spanning the work of Jean-Michel Basquiat, Sotheby’s is pleased to announce that our marquee evening auction of Contemporary Art in New York on 14 November 2018 will feature a group of four works by the artist emerging from the same distinguished private collection that similarly charts his rapid rise to international acclaim throughout the 1980s.

Together, the collection affords a remarkably comprehensive overview of Basquiat’s celebrated career. The group is led by his Untitled (Pollo Frito) from the critical year of 1982, when he fully ‘arrived’ on the international art scene. Comprising two panels that together span 12 feet (3.05 meters) across, Untitled (Pollo Frito) is estimated to sell for in excess of $25 million this November.

It is rare to find such an exceptional and cohesive selection of works that span the development of Basquiat’s groundbreaking visual language, representing his unparalleled mastery in a range of media such as canvas, paper, and wood. Alone, each work is the best of its kind; together, they chart an astounding narrative that exemplifies Basquiat’s creative genius and his resounding contribution to the 20th century. This collection provides a look into the mind of the phenomenon who broke with tradition and rewrote art history by his own rules. 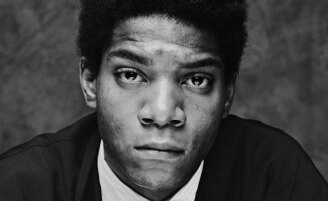 Untitled (Pollo Frito) and Taxi, 45th/Broadway are now on view at the Hong Kong Convention & Exhibition Centre. Select works from this group also will travel to London, Los Angeles and Paris this fall, prior to the full viewing of our marquee auctions of Impressionist & Modern and Contemporary Art that will open in New York on 2 November.

Paralleling the artist’s spectacular rise to international acclaim, the explosive mark-making and scrawls which cover (Untitled) Pollo Frito are fueled by the furious artistic drive which guided Basquiat as he began his ascent. The work dates to Basquiat’s breakout year of 1982, during which he received his first solo exhibition with Annina Nosei in New York, followed quickly by Larry Gagosian in Los Angeles, Bruno Bischofberger in Zurich, and an invitation to attend the international exhibition Documenta 7 in Kassel as the youngest artist in attendance.

Revealing virtuosic painterly abilities, Basquiat builds up intricately impastoed layers of oilstick, acrylic, and enamel upon the surface of(Untitled) Pollo Frito, and then slices through them with searing incisions, working positively and negatively to create an incredibly densely worked surface. The painting is replete with Basquiat's key iconography, including the powerful skull heads, three-pointed crown, and dense network of repeated textual references that recur in Basquiat's most significant works. His skill as a colorist is also on display, with the canvas almost completely covered in incendiary shades of orange, red, and yellow.

Taxi, 45th/Broadway brilliantly embodies the dynamic union of two of the 20th century’s most formidable artistic geniuses. Each a highly-influential figure in his own right, Basquiat and Warhol began collaborating together in the mid-1980s, in preparation for a joint exhibition at Tony Shafrazi Gallery in New York in 1985. These collaboration paintings represent Basquiat’s only venture with another artist. From different generations and backgrounds, and indeed at different stages in their lives and careers, their mutual respect for each other’s style and aesthetic formed the basis of an intimate friendship.

Capitalizing on the narrative power of imagery, Taxi 45th/Broadway deftly engages with art history, politics and race. A black man, made invisible in the black darkness of night, endures the label “Negro” as he unsuccessfully attempts to hail a cab, while a white taxi driver ignores his plea and instead curses profanities at him. Despite Basquiat’s meteoric ascension from downtown graffiti street artist to famous icon of the 1980s New York art scene – of which Warhol was critical in eliciting – his race still prevailed as his primary identifier outside the realm of the art world. The present composition therefore reflects on a deeply personal and frustrating recurrence in Basquiat’s everyday life. Taxi, 45th/Broadway was previously in the collection of Gianni Versace, and auctioned by Sotheby’s in London in 2005. The work has remained in the same collection since.

Untitled (1982) is a masterful example of the artist’s instinctive and lauded abilities as a draughtsman. Typical of his works on paper, the mark-making is urgent, the color varied, and the signature motif of the head central to the composition – an enduring icon that recurs throughout his body of work. Within Basquiat’s unique idiom, the warrior figure depicted here references the young artist’s ambition as he begins his rise to critical and commercial acclaim in 1982.

In this work from the final year of Basquiat’s young life – of which fewer than 30 examples are known today – we see the artist confronting and anticipating his own mortality. In several key paintings from this year, Basquiat wrestled with the reality of his own humanity by returning to the exploration of human anatomy that fascinated him since boyhood. Basquiat reduces anatomy to its most elemental forms, a kind of self-portrait that reflects his meditation on his own brilliance and cultural status as a prodigy haunted by his own demons. 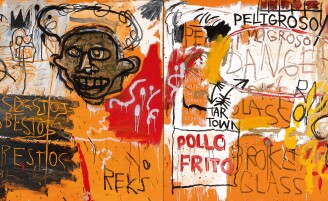