First Movers of Istanbul: Can and Sevda Elgiz

By Gareth Harris
The Vision Series explores great ideas in museum leadership, through candid conversations with founders, directors, and curators from around the world. Each month, Sotheby's Museum Network profiles a visionary who is rethinking the role of museums in the 21st century and going beyond the walls of the institution to connect with audiences in groundbreaking ways.

T he husband-and-wife collecting couple Can and Sevda Elgiz are trailblazers – the pair set up Turkey’s first private contemporary art museum in 2001, paving the way for a slew of such institutions in Istanbul by providing a model for local collectors. In addition to the support they've provided to Turkish artists since the 1980s, their vision also encompasses international art; works by Tracey Emin, Paul McCarthy and Barbara Kruger feature in their collection.

The Elgiz family has also turned to sculpture – in 2012, in another first for Turkey, the roof of the Elgiz Müzesi was transformed into an open-air exhibition space for large-scale, durable sculptures and Land art works. We spoke to Sevda about the roots of the collection, how it has endured and why sculpture is the way forward. 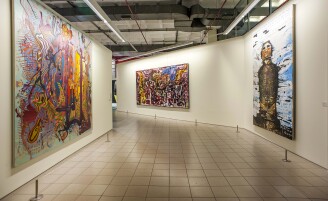 When you began buying art more than 30 years ago, there must have been very few collectors of contemporary art in Turkey. How did your collecting story start?

My husband is an architect; he studied architecture at university. His family also collected art. When we got married, looking at art became our hobby and we started visiting exhibitions and meeting serious collectors. There were one or two galleries in Istanbul but nobody was really showing contemporary art. Artists were producing works but no-one was showing them.

And then you started looking further afield?

Our taste went beyond Turkey; we began visiting major fairs such as Art Cologne, Art Basel and Arco in Madrid and buying works by international artists. We were also invited to many private museums overseas. Significantly, lots of private collectors and friends began asking us: “When can we come to Turkey to see works by Turkish artists?” There were very few collectors at the time who were interested in contemporary artworks in Turkey.

Your collection was obviously burgeoning. So what happened next?

Our initial plan was to make part of our collection available to [the city] of Istanbul because we wanted students, art lovers and foreign visitors to be familiar with the collection which included both local and international works. But instead, in 2001, we decided to open what we called an “experimental” museum in a building designed and constructed by my husband.

The space, which was called Proje4L, hosted many conceptual exhibitions. It became a model for other collectors; from the beginning, we have always thought that supporting artists is not just about buying their works but about making them visible. We thought our mission was accomplished, as major foundations with big budgets followed suit and began supporting Turkish artists. Eventually, Proje4L became the Elgiz Müzesi, a home for our collection and a space where other collaborations take place.

Did you face any opposition from the government?

The government did not support us and we certainly did not put up with any barriers or obstacles created by the government. We are a non-profit institution and fund everything ourselves so we never approached the ministry of culture.

We moved to Maslak, the business district of Istanbul – 10 kilometres across town – in 2005 because the collection was growing and the metro line was expanding there. The new venue was designed by my husband and the interior is split into three areas: the permanent exhibition area that houses the Elgiz collection, a temporary exhibition space where we host solo shows and displays organised with other institutions, and a mezzanine space that overlooks the permanent and temporary exhibition sections.

Do you have a collecting strategy?

I like to think that as a museum and collection, we represent emancipation. We have a liberating vision. The latest acquisitions are a photograph by Wolfgang Tillmans, Wald (Briol III), 2008, and a sculpture by Mahmut Aydın (Female Don Quixote, 2017). Other key acquisitions over the years include Stephan Balkenhol’s vast sculpture Big Man, 2002, which we acquired in 2012, and Azade Köker’s video installation Exploded Still Life, 2010, which entered the collection in 2010. Turkish artists represented in the collection include Nilbar Güreş, Adnan Çoker, Abdurrahman Öztoprak and Ferhat Özgür. We have an interest in photography as well; we are very fond of Cindy Sherman’s work for example.

You’ve turned your attention to sculpture in the past few years. Is sculpture still under-represented in Turkey?

Yes, sculpture remains a medium that still needs support, especially large-scale sculptures that need more space and visibility. We are determined to support contemporary sculptors and the development of the medium, and, with this in mind, we wanted to launch an open-air exhibition space when we moved to the new building.

The 1,500 sq m rooftop, which is dedicated to large-scale sculptures and Land art projects, is visible from other high-rise buildings in the area. We are so happy that other sculptures are situated at sites nearby. Every year, we make an open call for sculpture submissions which are evaluated by an advisory board; the works then go on show between June and October.

What has been your most ambitious sculpture show?

Australian artist Andrew Rogers created an ephemeral stone labyrinth on the museum terrace in 2013 (Winding Path, The Search for Truth); the piece was a small-scale replica of the giant granite labyrinth [he created] in the Kaligandaki Valley Gorge in Nepal. It could easily be seen from the sky!

Do you commission works?

No, we don’t, we support artists by putting on shows and producing publications. We also enter partnerships with organisations such as the Italian embassy, and we worked with the Austrian Culture Office on an exhibition that included works by artists such as Tanja Boukal and Chulayarnnon Siriphol. Another exciting collaboration is the upcoming show organised with the Goethe-Institut - Resource Utopia - featuring artists Larissa Araz, Erhan Arık, Öykü Canlı and Burak Dikilitaş.

The long-awaited contemporary museum for the Vehbi Koç Foundation is due to open in Istanbul next year. Is this a welcome initiative?

Absolutely. We are all working for the same aim; it is all for the good of Istanbul.