In these post-Brexit times, it is interesting to reflect how connected Europe always has been and will be, culturally and artistically. Nowhere is this more evident than in the way in which artists were inspired by, and in turn influenced, other artists of their generation.

This is borne out in three of the key works in the 19th Century European Paintings sale on 14 December, which give expression to strong synergies that existed between, in this case, a Spaniard, a German, and a Dane. Joaquín Sorolla’s Children on the Shore, Jávea, Max Liebermann’s Two Riders on the Beach, and Peder Severin Krøyer’s Wine Harvest in the Tyrol, were not only painted within four years of one another (the Liebermann and the Krøyer in 1901, the Sorolla in 1905); all display striking aesthetic similarities brought about by artistic cross currents pervading Europe at the time, and by increasing social mobility at the turn of the twentieth century. This applies to their choice of subjects, working methods and their interest in and preoccupation with the effects of light.

JOAQUÍN SOROLLA PAINTING ON THE SHORE.

Krøyer, though generally associated with the beaches of Skagen in northern Jutland, travelled south many times as a young man including to France, Italy and Spain, finding a wealth of inspiration in these countries. His arrival in Paris coincided with the Impressionist group exhibitions, and in 1877 he made an extended study trip to Spain, starting in Madrid before travelling on to Andalusia. These experiences and the southern light clearly influenced the vibrant, luminous palette that is evident even in his northern canvases and throughout his later oeuvre, including Wine Harvest in the Tyrol.

It is likely that Sorolla, in turn, saw Krøyer’s work at the Exposition Universelle in Paris in 1889, at which Krøyer exhibited not fewer than three beach scenes and won the Grand Prix. Among the exhibitors were many of the other great masters of plein air painting, including Jules Bastien-Lepage, William Merritt Chase, John Singer Sargent, Anders Zorn, and, significantly, Max Liebermann. Six years later, in 1895, Sorolla and Krøyer exhibited together at the Exposition Nationale des Beaux-Arts, where Krøyer showed Summer Evening on Skagen’s South Beach, and Sorolla Fishermen Returning Home. They again co-exhibited at the Exposition Universelle of 1900.  During that exhibition, Sorolla pondered that it was possible ‘on one and the same canvas to combine Krøyer’s sincerity and Zorn’s atmosphere with the power and relief of a Bonnat portrait and the character that Jean Paul Laurens is able to give the figures in his pictures.’

MAX LIEBERMANN WORKING ON A HORSE AND RIDER PAINTING ON THE BEACH ON THE DUTCH COAST, CIRCA 1912.

Max Liebermann had settled in Paris in 1873, and was a regular exhibitor at the annual Salon from 1874. The scandal that his Realist subjects of down-to-earth everyday life - such as girls plucking geese or workers in a turnip field - elicited at home in Germany may well have reached Krøyer’s ears. In 1875 Liebermann rented a studio in the artists’ colony that was 75 Boulevard de Clichy, where a fellow tenant was Léon Bonnat, under whom Krøyer trained starting in 1877. From this moment on Liebermann and Krøyer forged a lifelong friendship.

There are striking similarities between their work, not just a shared interest in the working class subjects, but in their use of rhythmical figure groupings: whether, as in Liebermann’s paintings, orphans, flax spinners or riders on the beach; or the grape pickers in Krøyer’s Wine Harvest in Tyrol. The two men exhibited together at the 1881 Salon, Liebermann showing The Old Men’s Home in Amsterdam, and Krøyer Italian Village Hatters, and a few years later at Galerie Georges Petit, where in 1906 Sorolla was to have his first one-man show. Later in life, Liebermann invited Krøyer to participate in the Berlin Secession exhibitions, where Wine Harvest in Tyrol was shown in 1905.

The 19th Century European Paintings sale is in London on 14 December. 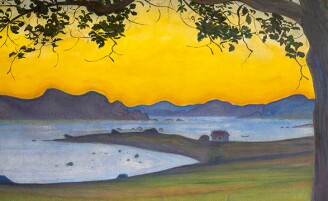