I n 2018, Tate Britain mounted the first exhibition in London for four decades of paintings by Edward Coley Burne-Jones. Comprised of over 140 pictures in various media, it showed the breadth of talent that made him one of the most remarkable artists of his generation. For many it was a chance to linger in front of famous pictures brought together in one place and asses the artist’s genius and unique otherworldliness.

The admiring public crowded the exhibition which would have delighted the artist who once told his wife; “I want big things to do and vast spaces, and for common people to see them and say Oh! – only Oh!” (Georgiana Burne-Jones, Memorials of Edward Burne-Jones, London, 1904, 2 volumes, vol.II, p.13)

Edward Burne-Jones was born in Birmingham in 1833 and attended a local grammar school and Birmingham School of Art before studying Theology at Exeter College, Oxford, where he first met William Morris. United by a love of literature, medievalism and an admiration for Dante Gabriel Rossetti, the pair left Oxford to pursue artistic careers, and, from 1861, they collaborated closely as partners in the decorative arts company Morris & Co.

As a pioneer of the Arts and Crafts movement, Burne-Jones saw no distinction between fine and applied arts, completing designs for stained-glass, tapestries, furniture and illustrations alongside his paintings. He was integral to the Victorian stained-glass revival, designing windows for numerous churches and secular settings across the country.

A Rediscovered Treasure From the Artist's Family

Burne-Jones visited Italy on several occasions between 1859 and 1873, and the works of the early Italian Renaissance masters, particularly Sandro Botticelli, had notable influence on his work. His exhibition of 1864, which followed his election as an associate of the Society of Painters in Watercolours, first demonstrated his mature artistic style. Two years later, he met Maria Zambaco, a Greek model with whom he had a scandalous affair and for whom he attempted to leave his wife, Georgiana.

The severity of this controversy, combined with harsh criticism of his work, resulted in Burne-Jones exhibiting just two works between 1870-77. He received true recognition in 1877 after he exhibited in the first show at the Grosvenor Gallery, and this success was repeated throughout the 1880s. Burne-Jones became an associate of the Royal Academy in 1885 and exhibited there just once the following year. Although he became a baronet in 1895, the 1890s were punctuated by periods of ill-health and grief for the loss of Morris. He passed away in London in 1898.

The scarcity of large oil paintings by Burne-Jones in private ownership, probably less than twenty, makes the re-emergence of Aurora an exciting moment, especially as it is in such wonderful condition and with an unbroken family provenance. Of the important pictures from his mature period most are in public collections around the world, including The Beguiling of Merlin of 1874 (Lady Lever Art Gallery, Port Sun-light), Laus Veneris of 1878 (Laing Art Gallery, Newcastle-upon-Tyne), The Golden Stairs of 1880 and King Cophetua and the Beggar Maid of 1884 (both Tate), The Wheel of Fortune of 1883, held in the collection of the Musee d’Orsay, Paris.

An ethereal figure of the Roman Goddess of the Dawn treads lightly over a wooden bridge amid towering buildings and a motionless river. The first light of the day is rising above the horizon to break the chill of night and reveal the recesses and apertures of the clustered houses along the quayside. The figure, clad in a radiant gown of saffron orange strides forth resembling a dancing flame.

She raises two silver cymbals and heralds the coming day, breaking the silence of slumber as she wakes the townsfolk with her music and her illumination. The doors remain unopened, the window-shutters closed to ward off the perils of the night. There is a sense of suspended time as though Aurora were about to clash her cymbals for the first time and break the reign of silence. The painting is one of Burne-Jones most powerful allegories, a personification of light and rebirth, power and grace. Free from the restrictions of conveying a narrative, Aurora is an example of Burne-Jones’ Symbolist tendencies in his later work.

Aurora is the counterpoint to Vespertina Quies (Evening Repose) of 1893 (Tate). Whilst Vespertina Quies captures the silent somnolence of the last light of the day, with the reflective introspection of da Vinci, Aurora reflects Botticelli’s graceful movement and the liveliness of waking hours. Both paintings depict the same young woman, a beautiful professional model named Bessie Keene (b.1878 or 1879) whose mother Annie had also posed for Burne-Jones many years earlier for The Golden Stairs (Tate).

"Bessie was an excellent sitter, though unfortunately in love with a heartless Mr Inwick, said to look like the heroes I paint, and I am rather kind, and take an interest." (Burne-Jones quoted in Penelope Fitzgerald,Edward Burne-Jones – A Biography, London, 1975, p.233) She is thought to have also been the model for the later version of Love Among the Ruins of 1894. As the artist Graham Robertson noted; "she succeeded her mother as chief ‘angel and ‘nymph " Graham Robertson, Time was – The Reminiscences of W. Graham Robertson, London, 1931, p.282)

A Tale of Two Pictures

Burne-Jones often painted alternative versions of pictures, and Aurora is one such work. An identically sized version now resides in the collection of the Queensland Art Gallery in Brisbane. In the 1890s Burne-Jones had many ongoing, unfinished projects awaiting his attention in the studio, so many that he felt overwhelmed at times. He drew a poignant caricature of himself entitled Unpainted Masterpieces c.1890 (British Museum, London), looking forlorn and surrounded by vast empty canvases threatening to engulf him.

Of his last great works, many remained incomplete, including The Wizard (Birmingham Museums & Art Gallery), The Sirens (The John and Mabel Ringling Museum of Arts, Sarasota), The Last Sleep of Arthur in Avalon (Museo de Arte de Ponce, Puerto Rico) and his great cycle of paintings The Perseus Series (Southampton City Art Gallery). Burne-Jones would begin versions of pictures before one was finished, sometimes working on two simultaneously with multiple patrons in mind or intending to retain one version for himself.

On 6 April 1896 Burne-Jones’ studio assistant Thomas Rooke recorded that he had been “laying in a replica of Aurora on a new canvas”, indicating that Rooke traced the composition of Aurora from the finished painting to the present canvas, which was subsequently painted by Burne-Jones himself.

The ‘sweeping strokes’ of orange in Aurora’s dress have a wonderful luminosity and expression of confidence but the painting was put aside, like so many others. There is a photograph of Burne-Jones studio at The Grange in Kensington which shows one of the versions of Aurora in a preliminary state on an easel beside The Marriage of Psyche and The Arming of Perseus.

On 20 April 1896 Burne-Jones returned to the two paintings of Aurora and made changes to the width of the bridge in the version exhibited at the New Gallery, following several comments from friends that the bridge was too narrow. At the same time he described making the same changes to the present picture “I did it on the other one first – that’s the good of having two pictures, one to wash the other, as Mr Morris says of having two shirts.”

Aurora was the ultimate example of a series of allegories of times of the day made throughout his later career from the 1870s onwards. The series includes Day and Night painted in 1870, and both in The Fogg Art Gallery at Harvard, and Vesper of 1872.

In Pursuit of Beauty

There was a dramatic, melancholic force to Burne-Jones’s later work in which the experience of a lifetime of painting was distilled into his series of pictures of fragile princesses and valiant knights, heroes and angels – romantic visions of youthful, beautiful men and women whose tall lithe bodies are perfected as though seen through the veil of a dream.

Beauty continued to be his main concern and in these last paintings there was also a silent tension of suppressed emotion. In his last years Burne-Jones sought to bring into focus the visions that had haunted him for almost half a century and were now threatened by an advancing modern, mechanical age.

The image of a beautiful girl’s face gazing out with an expression of regret, defiance and inward thought would be his greatest legacy. Having remained in the possession of the artist’s family since its creation, Aurora never been seen in public, exhibited or offered for sale before now. This extremely rare re-appearance of a lost work is a deeply significant in the story of this artist. It also offers an extraordinary opportunity to acquire a museum-quality painting by the one of the most remarkable artists of his generation, and a central figure in the Pre-Raphaelite movement. 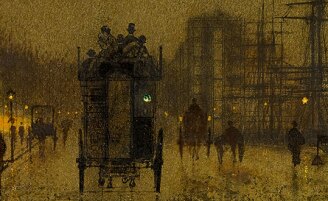