T iny production, an elusive winemaker, remarkable quality: the ingredients for Burgundy celebrity are all present at Domaine Jean-Yves Bizot. So infrequently are the wines seen that few drinkers can discuss them confidently and their maker rarely comments publicly on his wines. But this is what we know. Jean-Yves is the third generation of his family domaine, and his first vintage was 1998. Prior to that, he was a geologist and is still today a professor of viticulture and oenology in Beaune. Jean-Yves is married to Claire Naudin, whose family domaine is Henri Naudin-Ferrand.

Bizot owns approximately 3.5ha (7.5 acres) of vines which he manages from his property in Vosne-Romanée. His vines are particularly old, with many parcels planted prior to 1960. From Vosne, he makes three different village level cuvées, of which Les Jachées, from vines planted in 1930, may be the most celebrated. Above his village holdings is half a hectare of Échezeaux, of which the Les Orveaux lieu-dit is bottled as grand cru, while the Les Treux lieu-dit is usually declassified to Vosne Premier Cru.

The range of reds is rounded off with Bourgogne Rouge from an outstanding old vine lieu-dit, Le Chapitre, just south of Dijon; and Marsannay Clos du Roy. There is a tiny amount of Bourgogne Blanc produced from old vines adjacent to Clos Vougeot (Les Violettes) and some white Bourgogne Hautes Côtes de Nuits. The vines are farmed organically, and importantly, yields are kept very low. Bizot employs the Leroy ‘tall vine’ technique of not hedging the shoots during the summer to encourage photosynthesis in the leaves.

Bizot is noted for his unusual winemaking, which would usually be described as ‘minimal intervention’: there is no de-stemming of berries and very little addition of sulfur dioxide at any stage. However, he also uses 100% new French oak (Rousseau tonnellerie) for all his wines, including Bourgogne Rouge. The wines are not blended across barrels and are bottled by hand.

The style of the wines is one of lacy purity of fruit, with every detail of flavour finely delineated. Explosively aromatic and spicy thanks to the use of the stems, the wines show a remarkably silky texture in spite of their considerable concentration. And while the fruit is generous and succulent, the wines are eminently savoury expressions of red Burgundy.

Qualitatively, vineyard classifications are almost irrelevant at this address: many domaines would love to produce a grand cru at the level of Bizot’s village wines. There is disagreement among Bizot adherents about whether the wines drink best in their showy youth or should be left for two decades for their full complexities to be revealed. Either way, for those lucky enough to experience them, it is obvious that Domaine Bizot’s wines belong in the pantheon of the very greatest of red Burgundies. 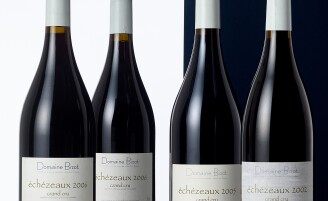