Director Morgan Neville on Growing Up with a Passionate Book Collector

NEW YORK – For Maurie Neville, books have never been just about dealing – they are a passion. And according to his son Morgan Neville, an Oscar-winning director, a way of life. At its height, Neville's remarkable collection was all over the family home. "Pretty much every room had a bookshelf," says Morgan. "My mom wouldn’t let him shelve the bathrooms, but everything else was up for grabs." Now, thirteen years after a two-part sale of the Maurice F. Neville Collection of Modern Literature set numerous author and genre records, comes Part III, including many significant 20th-century authors as well as miscellany from Neville's diverse interests. "Even having done these three sales, it doesn’t feel like the house is empty. There’s still a lot more." We spoke with Morgan about his father's love of inscriptions, friendship with Charles Bukowski and how he went from enthusiast to dealer.

Your father put together a truly impressive, extraordinary collection. How did his interest in collecting begin?
My dad grew up on a farm in Indiana, and I think literature was his window into the world. By the time he was twenty, he was following the bulls in Spain. For a farm boy from Indiana, there’s only one reason that happens – and that’s Ernest Hemingway. He’s always had a deep love of books, but it wasn’t until he was about thirty that he really embarked on being a collector and dealer. In some ways, I think he was a book dealer to support his collecting interests. It’s something he found endlessly fascinating, and it gave him a way to have contact with writers.

Was he looking for something in particular?
Manuscripts, inscriptions, letters and first editions are what have always interested him – they tend to make you feel like you’ve touched the hand of the writer. What is the context of the inscription, what is the association of the dedication? I think that direct connection always spoke to him in what he wanted to collect. He also always loved one-of-a-kind pieces.

Where did he like to hunt for books?
I spent my childhood in bookstores. My dad usually bribed me by saying he’d take me to a baseball game or a movie if I spent six hours in a bookstore. Our family travelled to pretty much every country that spoke English – England, Australia, South Africa, Canada and all over the States. We spent a lot of time driving around the rural English countryside going to bookstores and bookstalls, not to mention all the book conventions and auctions. It was definitely all-consuming, and it was an exciting time to be a book collector, too. I think that market was just kind of emerging. Although he didn’t see it as a market, he saw it as a passion.

So you saw his collection grow a great deal during your lifetime?
Absolutely. My dad’s own collection really began when the Unger collection came up for sale. Norman Unger was a major benefactor of many writers, and collected books that were often inscribed. He would wrap them in paper and put them away very carefully. My dad basically took a leap and bought – I can’t remember how many volumes – but measuring in boxes, it was in the hundreds. That’s what thrust him into being a book dealer. I think he bought that collection because it was his moment of stepping off the cliff and saying, “Let’s see where this takes us.” For a year our entire living room was floor to ceiling boxes, and I would make little tunnels I could climb through. We eventually opened a bookstore in 1977.

Do any memories of your father collecting books stand out?
Our house was always open to all folks of the book trade – my parents had an open door policy. I remember we had people from an auction house once stay for three months, as well as endless book dealers and many writers. It sounds pretentious to call it a salon, but there was an atmosphere of lots of interesting people passing through having late night conversations. I remember having breakfast one morning with Charles Bukowski at our kitchen table. He had been out drinking at a reading with my parents, and they had come back to our house and put him to bed in our guest room. He woke up in the middle of the night, and I guess by habit he would hide his keys in his wallet because he was used to getting rolled at the shadier places he had lived. So he went stumbling through the house into my parents’ bedroom around 5 AM and said, “My name is Charles Bukowski, just give me my keys and my wallet, and I’ll leave you.” My mom got up and said, “Chuck it’s okay! You can go back to sleep, it’s fine.” They all became friends and would go to the track together.

As a director, producer and writer, you make fascinating documentaries about a range of topics, from backup singers and the music industry to Gore Vidal and William F. Buckley, Jr. Do you think being around such an extensive library at a young age fostered your curiosity and imagination?
Without a doubt. My dad, in addition to being a huge fan of literature, is a huge cinephile and music fan. In a way I feel like he was inculcating me from a young age, making sure I had seen every Marx Brothers movie, read every Hemingway book, listened to every Bob Dylan album.

Do you have any favourite works in the sale, or any that hold any personal significance for you?
I love the Factotum manuscript – it’s amazing. It just reminds me of Chuck. But the most personal by far are the Zelda Fitzgerald paper dolls. My mom had those hanging in her dressing room my whole life. They’re beautiful, and when I see them I think of my mom. They make me happy.

Is book collecting something that you’ve picked up as a hobby yourself?
I do collect some books, but understanding what it’s like to be a book collector at the top of your game, it’s dissuaded me from putting in a real effort. I love being in bookstores though. I’ve thought for a while now about trying to do a documentary on books. We don’t necessarily appreciate the artefact of the book anymore. It’s something that’s been such a big part of my life, and something I think we should have a conversation about. When you go to a place like Powell’s in Portland or Skylight Books in LA, the places that have survived the online revolution, you realize books aren’t just about objects. They’re about our collective ideas. I think if there’s anything we need more of in this day and age, it’s that. 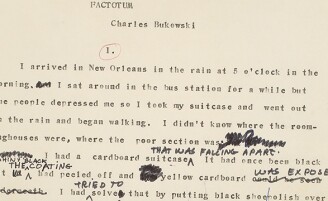