Cufflinks, From Status Symbol to Casual Wear, and Back Again

W hen you’re looking to really elevate a man’s wardrobe, there are only a few ways to do so. One of which is a timeless pair of classic cufflinks.

Cufflinks have a long fashion history, dating back to the Middle Ages, where they were used as an accessory as well as a necessity. Particularly popular in England, they were popularised by Royals such as King Charles II, who began to have special commemorative cufflinks made to honour weddings, coronations and other special occasions.


In France, they became the mark of aristocracy, and Louis XIV “Le Roi Soleil” went one step further, tying the cuffs of his shirtsleeves together with strings, ruffles and ribbons, as well as cufflinks, to signify his status. Their use started to filter down to the rest of society, becoming popular, particularly with businessmen in the 19th century, with the rise of the Industrial Revolution.

At this time, a wide range of cufflinks were produced in an array of materials from silver to gold and finally platinum, and the classic chain stays that had been used in early pairs were replaced with clips, making them easier to attach. At this time too, a new style of cufflink appeared - the French Cuff - sometimes thought to have been inspired by the characters in Alexandre Dumas’ The Count of Monte Cristo. The new style was created simply by twin designs facing each other.

The next chapter for cufflinks came as they became integral to French fashion. Tailors introduced the accessory to the dandies of the day and men began showing off their cufflinks as part of their casual wear, making them more of an everyday fashion requirement.

By the mid-19th century, almost everyone in the middle or upper classes wore cufflinks. But their heyday was short, as soon, the advent of shirts with attached buttons once again returned cufflinks to special occasion status - restricted to wedding and formal wear again until around 1920. 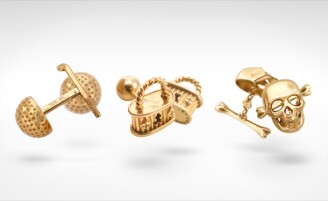