Chateau d'Aunoy: Setting the Scene for Famous Film and Fashion

By Constance Schaefer-Guillou
From 28 June to 10 July, Sotheby’s will offer an inspiring group of paintings, decorative objects and design pieces from the Château d’Aunoy in an online-only auction .

J ust a few minutes from the famous Château Vaux le Vicomte, the Château d’Aunoy is surrounded by one of the earliest examples of English-style gardens created in France during the 18th century. The original owner, a notable lawyer for the Paris parliament, for each piece in this country house to build a tranquil setting, in which he hosted refined members of society. Among the first visitors to the house were the Prince of Conti and the Duchess of Chartres, who both shared a passion for English gardens.

From the château inspired by grand townhouses with courtyard-style gardens, to the grottos and pavilions in the garden creating an idealised vision of nature, Aunoy embodies a unique “art de vivre”. This exquisite setting has inspired many artists, particularly during the 20th century. French filmmaker Bertrand Tavernier chose it as a location for his film ‘Que la Fête Commence’, released in March 1975 to great public and critical acclaim, cementing the filmmaker’s reputation as well as winning four César awards. The renowned photographer Helmut Newton also used Aunoy as the backdrop for one of his provocative Sleepless Nights series.

Awarded with four César, the film ‘Que la fête commence’, met with great public and critical acclaim as soon as it was released in March 1975 and contributed in cementing the reputation of filmmaker Bertrand Tavernier. A vitriolic account of the Régence, the film brings together for the first time three actors who were destined to become giants of French cinema, Philippe Noiret, Jean Rochefort and Jean-Pierre Marielle.

Noiret excels in his role as Philippe d'Orléans, the ‘Régent’ who has a great desire for reform but who is overtaken by a melancholy which he chooses to forget in a life of debauchery, whereas Rochefort plays the role of his Prime minister 'l'abbé Dubois', devoid of any scruples or any self-respect and finally, Marielle portrays a tragic-comical country squire, who is fighting an improbable battle in the name of the 'république bretonne'.

Beside the brilliant historical reconstitution, ‘Que la fête commence’ seems to be a wider reflection on the exercise of power (people at the time even saw some references to the 7 year presidency of Valéry Giscard d'Etaing). The production, unusually free in its approach for a period movie, often resorts to the moving 'shoulder' camera, particularly for the scenes filmed in the château d’Aunoy. The château perfectly evokes the 'petite maison' (small house) or 18th century 'folie' (folly), which had the purpose of accommodating the orgies of the Régent. The ’salon de marbre' (marble salon) conceived in the Louis XIV style, serves as the setting for the big banquet whereas, in the 'salon rose', the musicians interpret original compositions by the duc d'Orléans.

The antechamber, with its beautiful stone and black marble pavement, is witness to the Régent’s last funereal mascarade to which he invites his courtiers who are disguised as allegories of 'misère' (great poverty), hopelessness and death. Finally, the Régent's carriage, out of control on the large avenue lined by centuries old trees leading to the château is the setting for the final scene, which illustrates the headlong flight of the ‘Ancien Régime’ and its predicted downfall. 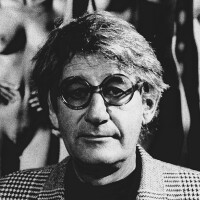 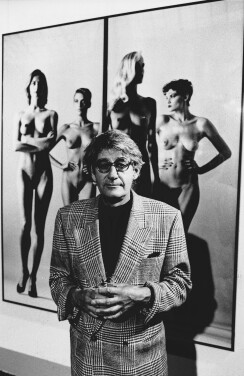 The photos in the parc of the château d'Aunoy in 1978 are no exception to this: between dissoluteness and sadomasochism, two naked women, one very small and the other immense, embrace each other teetering on shoes of an unmistakably phallic symbol. Like the surrealists, Newton, enjoys making this improbable couple stroll underneath the Aunoy foliage, thus creating the most poetic series of his Sleepless Nights.

Acknowledged today as a one of the major figures of 20th century photography, Helmut Newton, who defined himself as a 'professional voyeur', never stopped pursuing throughout his work the history of the classical nude, elevating his models to the rank of statues. Interior designer Emmanuel Motte oversaw the renovation of the château d’Aunoy, reimagining the salons as extensions of the garden.

By opting for a mix of styles, Motte created a dynamic yet harmonious décor scheme. In the late 1970s, the property was acquired by friends of the designer, Monsieur and Madame Tapiau. An art and design enthusiast, Jean-Louis Tapiau brought a fresh, modern vision to the Château, fusing his parents' traditional collections with contemporary design, art and sculptures. Sotheby’s is delighted to share his ‘art de vivre’ with collectors in this unique online auction. 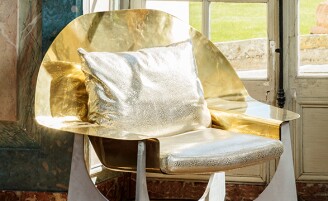