By Sotheby's
As a major Calder work is offered in Art Contemporain in Paris on 5 June, we look at a new exhibition at the Musée Picasso considering the relationship between the two artists, and their legacy in the story of modernist abstraction.

T hough both men lived and worked in Paris between the wars, Pablo Picasso and the American sculptor Alexander Calder were never friends. In part, that was because of a language barrier: the former didn’t speak English, and the latter was not particularly good at French or Spanish.

A new exhibition at the Musée Picasso in Paris, though, focuses on the artistic language they shared. Featuring 120 works, Calder-Picasso sets out to show these two titans of modernism actually had a lot in common. Coinciding with the exhibition, Calder's important 1958 mobile Untitled will be offered for sale in Art Contemporain, at Sotheby's in Paris on 5 June, and a number of works by Picasso, including Nu féminin assis,
appear in the Impressionist and Modern Art Day Sale in London on 20 June.

Their most famous coming-together was in 1937, when each was invited to create a work for the Spanish Republic’s pavilion at the World’s Fair. On the ground floor, Picasso presented what would become perhaps the most famous painting of the 20th Century, Guernica. Its closest companion was Mercury Fountain by Calder, a mesmerising sculpture in which mercury pumped through a water fountain. 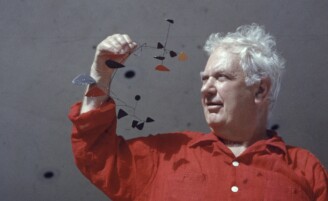 Neither artist was especially political, yet both came down on the side of the Republicans in the Spanish Civil War. The conflict was at its height during the months the World’s Fair was on (May to November 1937): Guernica served as a lament for the destruction of the eponymous Basque town, Mercury Fountain as a symbol of Republican resistance (Nationalist forces having recently failed to capture the vast mercury mines of Almadén, south of Madrid).

The Musée Picasso exhibition – curated by Bernard Ruiz-Picasso and Alexander S.C. Rower, the grandsons of Picasso and Calder respectively – suggests the pair’s careers overlapped in many other ways too. For instance, in the late 1920s, when Calder started making sculptures of acrobats, animals and fellow artists such as Fernand Léger and Josephine Baker out of bent wire.

At roughly the same time (with the help of his compatriot, Julio Gonzalez) Picasso created a similar group of sculptures – of charioteers, each work essentially a lattice of iron rods. The pieces by both men came to be dubbed ‘drawings in space’. Why? Because they didn’t resemble sculpture as people traditionally knew it – there was no monolithic mass of stone or bronze, but lines of great levity instead. What they resembled most of all was drawings in mid-air. Picasso and Calder duly shifted the definition of sculpture: emptiness was now as important as substance.

Picasso was born in Malaga in 1881, Calder in Pennsylvania in 1898. Both were the sons of artists. The Spaniard’s father, José Ruiz y Blasco, was a painter who specialised in depictions of birds. In the American’s case, his father and mother were artists – as, most famously, was his grandfather (Alexander Milne Calder sculpted the huge statue of William Penn that still towers over Philadelphia City Hall to this day).

After settling in Paris, Picasso and Calder would both flirt with, but never commit to, the myriad art movements of the day – with the exception of Cubism, of course, which Picasso pioneered. (Calder once joked that he shouldn’t be confused with "the Surrealists, the Neo-romanticists, Concretionists, Automobilistes or Garagistes" – the joke being that the last two of those movements never even existed.)

It’s worth considering Picasso’s Cubist works briefly, as they provide another interesting connection to Calder. These offered multiple views of their subject in one and the same picture: abandoning single-point perspective and the age-old illusion that three-dimensional reality was being captured on a two-dimensional surface. The Cubists sought to stress the very two-dimensionality of their canvas.

Compare this with Calder’s best-known works, his ‘mobiles’, a fine example of which – 1958’s Sans Titre – appears in Art Contemporain Sotheby’s on 5 June. With these, he too took liberties with the dimensions that viewers expected from their art.

Mobiles consisted of colourful, sheet-metal shapes, hanging by wires from the ceiling – the remarkable thing about them being their potential for movement. They rippled gently or shook briskly, depending on the air current in a room. Three-dimensional sculpture, in other words, now also operated in the fourth dimension of time.

"as unique and fleeting as first light."

The French philosopher Jean-Paul Sartre was a big fan of the mobiles, declaring them "as unique and fleeting as first light." They resemble the dangling decorations above countless babies’ cribs and duly appeal to the inner child in us all. (Calder himself quipped that ‘my fan mail is enormous – everyone is under six’.)

The playful side to the American’s art, however, belied a profound seriousness and radical impact. Few peers could match him when it came to challenging orthodox ideas about form, volume, perspective and the dimensions of an art work. Few peers, that is, apart from Pablo Picasso. 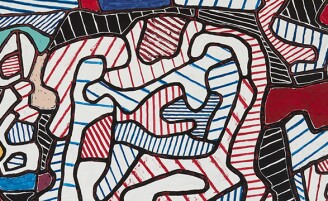