Breathtaking Portraits Celebrate the Women of the Art World

I n conjunction with January 2019 Masters Week and The Female Triumphant: Women Artists of the Premodern Era, Sotheby’s is hosting an exhibition of contemporary portraiture by the acclaimed Dutch photographer Carla van de Puttelaar. Taken from Van de Puttelaar’s inspirational and globally recognized series, Artfully Dressed: Women in the Art World, the exhibition features over 60 portrait photographs of prominent and promising women in the art world, including museum curators and directors, collectors, academics and art historians, gallerists, auction professionals, artists, art fair organizers, philanthropists, conservators, and journalists. The women span a wide range of backgrounds, nationalities, areas of expertise and ages, but are united in their intelligence, achievements, influence and taste. Van de Puttelaar began this timely series in the spring of 2017. The January 2019 exhibition will include 30 new portraits commissioned by Sotheby’s for this important and ongoing project. 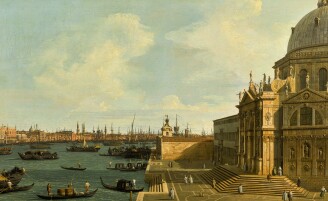 Sotheby’s is proud to celebrate Van de Puttelaar’s series which highlights the accomplishments, diversity, and personal character of intriguing women across various disciplines of the industry. Van de Puttelaar’s work, drawing inspiration from Old Masters and specifically 17th century portraiture, will be fittingly displayed alongside paintings, drawings and sculpture from centuries earlier. We look forward to the visual comparisons and juxtapositions between her portraits of inspired modern women and their earlier counterparts.

The exhibition is organized in partnership with Rachel Kaminsky, a New York based art dealer photographed by Van de Puttelaar in 2018.

What are you hoping to convey with this project?

I want to shine a light on all the remarkable women in the art world. I have a large network of contacts and increasingly became aware of a growing group of talented and successful women, who are often working in the shadows and unknown to a larger audience. My aim is to bring together women from a wide range of backgrounds, nationalities, careers and expertise, all of whom are united in their brilliance and strength.

How did you conceive of the series?

In the early Spring of 2017, before the #MeToo movement started, I was asked by a London gallery for a solo show of my work. They wanted me to create a special project. I have always photographed women, with a focus on the female nude and portraiture. Portraiture is also important to my work as an art historian. In particular, I admire great masters like Anthony van Dyck and Sir Peter Lely. These artists empower their sitters through pose, sumptuous costumes, bold draperies and jewelry. I decided to make a tribute to all these amazing women in this tradition.

How did the exhibition at Sotheby’s come together?

In 2018, I photographed Rachel Kaminsky, a prominent New York art dealer, who has become a great supporter of my work. Although she now handles later art, the majority of her career was in Old Master paintings, a field that traditionally has few women. She was moved by the importance of this series, my desire to promote women in the art world and the quality of my work. Rachel approached the Old Master Paintings department at Sotheby’s New York about hosting a show featuring American women. It means a lot to me that Sotheby’s is supportive of my work.

Tell us about the women in the Sotheby’s exhibition and how they were chosen.

The Sotheby’s exhibition, like the overall series, depicts a cross-section of prominent women from all disciplines of the art world, as well as some impressive younger women. However, as I am Dutch, to date the majority of my sitters have been European. For the New York show, Rachel and Sotheby’s introduced me to an impressive group of American women. It was a privilege to meet so many interesting and accomplished women, including some in unique positions, like Rena De Sisto, global arts and culture executive for Bank of America, Inge Reist, Director Emerita of The Frick Collection's Center for the History of Collecting at the Frick Art Reference Library, and Renee Price, Director of the Neue Galerie. Also included in the January exhibition are women at Sotheby’s New York and a selection of Americans, some based in Europe, who I photographed earlier in the series.

As a portraitist, how do you interact with sitters and make them feel comfortable?

I work very informally. Often, we first chat over a tea or coffee, either to catch up when we already know each other or otherwise to get acquainted. We look at the clothes or other items that they have brought. In the meantime, I observe the sitter and find the parts of their personality that are fascinating to me. In a way, it is a bit like falling in love. You will be inspired by the personal brilliance, a look, a smile, a gesture, the wit, elegance, boldness, eyes, hands. For me those are the features I want to show. I try to capture every detail that I find mesmerizing in one portrait.

Where were the photographs for the Sotheby’s show taken and what is your process?

I spent a week at the York Avenue premises photographing on average four to five women a day. These new works constitute about half of the Sotheby’s exhibition. I use only natural light, so being near a large window is critical. Every evening Rachel [Kaminsky] sent a short bio on the sitters for the following day. This was helpful in making connections with the women, most of whom I didn’t know, and in thinking ahead as to how I might portray them. For example, knowing that Elizabeth (Betty) Eveillard is the Chairman of the Board of Trustees of the Frick Collection gave me the idea to include a detail in the background of her portrait, the magnificent Ingres Portrait of Comtesse d'Haussonville that hangs in the Frick museum. The poses of the two women, both dressed in blue silk, struck me.

The exhibition is entitled Artfully Dressed: Women in the Art World. Tell us about “artfully dressed.”

Women in the art world are stylish and have a strong sense of self. My sitters are invited to wear their own clothes and jewelry, or in some cases fashion designers generously lent their creations. Designers represented in the Sotheby’s exhibition include Dior, Prada, Roksanda, Alexander McQueen, Han Feng, Zaeem Jamal, Duro Olowu, Thebe Magugu, Paul Smith, Anne Fontaine, and Adeline Lee. Other women chose to be draped by me in sumptuous brocades and silks. In Europe, Watts of Westminster, Fortuny, Rubelli, and Colefax and Fowler generously provided fabrics. For the New York shoot, Rachel and the indispensable Sotheby’s Old Master team had a field day choosing over a dozen lengths of Rubelli brocades at the Donghia showroom and at Schumacher. For example, Julia Marciari-Alexander, Director of the Walters Art Museum, did her PhD on the seventeenth-century portraitist Sir Peter Lely. I draped her like a grand lady in a Lely. A few women brought props relating to their professions and several arrived with their dogs.

Who and what has most influenced your work?

From my earliest childhood onward, I have had a love for people, portraiture, art, fabrics, music and the creativity of others. One of my grandmothers had a great passion for antiques and loved to sing. Her personality and the things she collected had a great impact on me. Over the years Old Master paintings became very important for me. Together with my partner, the art historian Fred G. Meijer, I constantly look at and talk about art. Both as an artist and art historian, great masters like Rembrandt, Vermeer, Van der Weyden, Van Eyck, Caravaggio, Cranach, Van Dyck and Rubens have inspired me, as have lesser known artists.

What do you consider a good photograph?

Not focusing on portraiture specifically, I would say that a good photo captures a magical sensation. That means that as a spectator you feel you are being drawn into the image, for one moment you step into another world, like Alice in Wonderland. Often the same happens to me when I make that particular photo. With portraiture you add to this all the information that you have gathered, often subconsciously, in order to celebrate an inspirational personality in the ultimate portrait. Somehow, I see that everything clicks into place and I am enchanted myself.

Has the series been shown before and do you foresee future exhibitions?

In May 2018, over 70 portraits from this project were exhibited in London. One of the photographs has been nominated for Portrait of Britain 2018 organised by the British Journal of Photography. The same portrait has been selected for the exhibition of the Taylor Wessing Photographic Portrait Prize 2018 in the National Portrait Gallery, London. The project continues to grow and will be exhibited at other venues (USA, UK, The Netherlands). A large retrospective of my work will be shown at the Museum of History and Art in Luxembourg in 2020, including photographs from this series. Several museums have expressed interest in exhibitions and collaborative projects. I would particularly love to have an American museum show my work and this series.

What is the future for the series?

This is an ongoing project. I now love it so intensely that I will continue to photograph more women and let the series grow and blossom. There are more areas to be explored, which in turn will lead to new developments. This is vital for my work as an artist. A book on Artfully Dressed: Women in the Art World will be published by Unicorn Publishing in 2019.

Carla van de Puttelaar (1967, Zaandam) is an artist and art historian, who lives and works in Amsterdam. She was awarded several prizes including the Prix de Rome Basic Prize. Her photographic work has gained worldwide recognition, and she has exhibited in numerous museums and galleries around the world, such as the Rembrandt House Museum in Amsterdam for which she created The Rembrandt Series. Her work has appeared in many publications including five monographs. She works for acclaimed magazines and publishers such as The New York Times Magazine, The New Yorker and Random House. The cover that she did for The New York Times Magazine in 2015 was selected as one of their best photos of the year. Her work is present in many public and private collections around the world. Van de Puttelaar has taught Photography at the Royal Academy of Art in The Hague. She published several articles on Dutch portraiture of the seventeenth century. In 2017, she successfully defended her doctoral thesis on Scottish Portraiture 1644-1714 at Utrecht University.