A s canvases go, few can compare with the Black Rock Desert – arguably one of the world’s most punishing backdrops for creating art. Each year, this hot, hard-to-get-to and largely uninhabitable swathe of parched lake bed in northern Nevada becomes a globally renowned creative nexus, where tens of thousands of people descend to transform the Black Rock Desert into Black Rock City – otherwise known as Burning Man.

Mainstream-level famous, yet still rooted in the counterculture of its origins, this genuinely singular nine-day event is the most widely known element of a much larger structure. Burning Man is also a community, a value system, an international event network and, most fundamentally, says Burning Man Project chief executive Marian Goodell, “a global culture that prioritises radical and creative self-expression in its many forms”.

Burning Man has naturally always attracted artists interested in both this mindset and the tangible products that it fosters, from sculptures and paintings to fashion, photography and flame-throwing mutant vehicles. In Black Rock City, the playa serves as a raw space in which artists work with a level of freedom not always available in more traditional artistic circles or the ‘default world’ at large.

Still, it’s not an easy place to be.

“I have asked artists why they bring art to Burning Man,” says Kim Cook, Burning Man Project’s director of creative initiatives. “It costs so much money; it’s so many weeks in the desert; it’s so hot; it’s so hard; it’s so many tears, so many romantic break-ups and credit cards run up. It’s really a lot, but when artists explain why they do it, they talk about no white walls and no gatekeepers. It’s open space.”

This September, Burning Man Project and Sotheby’s will launch Boundless Space… The Possibilities of Burning Man. The exhibition, event series and auction will showcase the work of 170 artists revered in, and new to, Burning Man’s global network. 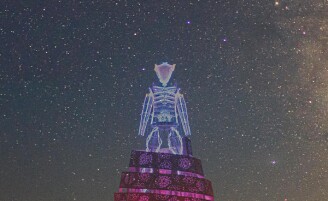 Through the initiative – the first of its kind for Burning Man Project – organisers are aiming to exemplify and extend the spirit of open space and radical creativity that’s attracted tens of thousands of creators to the community since Burning Man came to life in the San Francisco Bay Area during the mid-1980s. Money raised will help to fund the non-profit Burning Man Project and benefit creators whose art-world profiles will likely be raised through the initiative.

“Burning Man art has been an emergent and provocative force for more than three decades, yet it has remained beyond the span of the traditional art world,” says Goodell. With Boundless Space, “we are not, however, seeking legitimacy from established institutions. What we are doing is experimenting with new kinds of collaborations in the interest of sharing our culture with an ever-widening circle of participants, and celebrating and advancing artists.”

“When artists explain why they do [Burning Man], they talk about no white walls and no gatekeepers. It’s open space”

Upon first trekking to the desert in 1997, contributing artist Leo Villareal erected his debut installation, essentially by accident, when he strung up a few lights to guide his way back to camp. “It was made for a utilitarian purpose, but it ended up being my first light sculpture,” he says. “What I’ve been doing for over 20 years now really started on the playa.”

Villareal has since become globally celebrated for installations such as The Bay Lights, for which he installed 25,000 white LEDs on the Bay Bridge connecting San Francisco and Oakland. His Illuminated River work currently extends lights across nine bridges over the Thames in London. Both works (and other Villareal creations like them) are outdoors, free to view and accessible to anyone – all defining characteristics of art at Burning Man.

“A lot of the DNA of my work is very connected to things I learned at Burning Man,” Villareal says, “ including the creation of communal experiences and bringing people together.”

Burning Man culture is guided by 10 Principles – among them Participation, Communal Effort, Radical Inclusion and Radical Self-expression – intended to foster a unique flavour of inclusive creativity. “It’s fundamentally about the freedom to express oneself and about the relationships that are formed as a result of co-creating, rather than art for art’s sake,” says Goodell.

With these tenets at the core of its philosophical framework, it follows that Burning Man Project has long been committed to supporting artists through programmes such as its Global Art Grants, which since 2002 has issued nearly a million dollars to artists in 34 countries. This programme has helped fund everything from a house-sized music box in New Orleans, to 32 miles of knitted material in Portugal, to a door installation made by residents of Uganda’s Nakivale Refugee Settlement. Funds raised through Boundless Space will extend this work by supporting Burning Man Project’s civic art and engagement programmes, which include the art grants.

Money raised will also help to ensure Burning Man Project’s long-term survival. The project first took shape when renowned visual artist and hip-hop pioneer Fab 5 Freddy contributed his work to Sotheby’s Hip Hop auction in September 2020. During a meeting with Sotheby’s chief executive Charles Stewart, Freddy – who first attended Burning Man in 2010 – mentioned that he’d recently joined its board of directors and that the organisation was looking to raise money; its primary revenue source, the Black Rock City event, had been cancelled due to the pandemic. Sotheby’s was interested in getting involved.

“It made sense,” Freddy says of the partnership. “Sotheby’s deals in culture… They were open to working with us in a way that we can just do what we do.”

A collaboration between a blue-chip global corporation and a countercultural institution with no marketing department and a values system emphasising decommodification was perhaps unlikely. But, Goodell says, the two entities also have a shared history of “investing in the development of artists through unique platforms”. This joint effort makes it possible to “cross-reference our artists, our communities, and make a clear commitment to adding voices that have previously been missing from our two worlds”, she explains.

Cook adds that “Burning Man has a history of caring about and celebrating artists, which was exemplified in founder Larry Harvey’s longstanding relationships with many of the best-known artists from the Burning Man event.”

That said, Boundless Space has been structured in a way that’s unique to Burning Man, with Sotheby’s waving traditional elements such as seller’s premiums. All artists who donated work have chosen to take either 55, 25, 15 or 0% of hammer proceeds. Cook, who has led the project, has emphasised the inclusion of BIPOC artists and artists from the global south, with participants including the Philippines’ Leeroy New, the US’ Maurice Cavness and Zambia’s Gladys Kalichini. She has done so using traditional systems, she says, to “broaden the scope of what’s visible on the international art stage”. This diversity effort is in alignment with Burning Man’s broader goal of, Cook adds, “evolving its own process of moving beyond being a predominantly white space.”

The Boundless Space catalogue possesses serious depth, grace and whimsy, with everything from sculptures to stilt-walking lessons, NFTs, art cars, a purse made from Burning Man wristbands and a painting created with a brush made from a single human hair, some referencing the desert event and others going well beyond that aesthetic. “I didn’t want to package and sell, exoticise or commodify Burning Man culture,” Cook says. (The auction does not include tickets, camp placement or experiences that relate to the next Burning Man event in Black Rock City, although each artist involved was offered a ticket to the next event.)

Among those involved are well-known Burner artists including Villareal, Kate Raudenbush and Peter Ruprecht. Additionally, a 22-person nominators and connectors committee has sought out artists who have never participated in Burning Man, but who make work aligned with Burner values. This group includes Beirut native Yasmine Dabbous, who hadn’t heard of Burning Man when she was asked to donate a pair of her handmade necklaces. She did some research. What she found, resonated.

“My work is cross-cultural and about otherness and accepting otherness,” Dabbous says. “It’s about inclusion and celebrating artisanship, so I felt like even if I am not involved in this [Burning Man] culture, I am kind of involved at a human level. I still identify with the values and beliefs this culture represents.”

Dabbous and other artists from the show have been invited to attend events in New York City, Mexico City and beyond, which are happening ahead of the auction, to familiarise the Burning Man community (and potential buyers) with the catalogue. A public exhibition at Sotheby’s exhibition space in New York will also offer the general public a way to connect with Burning Man culture, even if attendees don’t intend to buy any art or won’t ever make it to the desert.

Cook is working with production designer David Korins (Hamilton, Lady Gaga, Elton John) to “get past the white walls” of this exhibition area by installing elements familiar on the playa, from lights and rigging to trusses and dusty sofas.

From the artists involved, to the way money raised will be spent, to the fact that anyone can participate by simply exploring the auction online, Boundless Space still emits the spirit of radical creativity so sacred to Burning Man culture. While it’s certainly challenging to recreate the stark grandeur of Black Rock City in a New York gallery or online auction catalogue, altogether, the project has managed to transcend its bounds.

“My goal,” Cook says, “is to still keep this sense of wide-open space.”

The full Boundless Space catalogue opens on 20 September. Bidding on the auction will be open from 30 September to 9 October