Bice Lazzari: 'Like a Piece of Ice in Which a Flame Burns'

A n isolated and solitary figure, Bice Lazzari was born in Venice on 15 November 1900 into a middle-class family of merchants and builders. Like most girls of good family of the period, she was enrolled at the music conservatory to learn to play an instrument. However, the young Bice encountered plein air painting through an uncle who was an architect and a distinguished professor at the Venice Academy of Fine Art, and after enrolling at the institution in 1916, she attended classes for a year until the war forced her to continue her studies in Florence.

The artistic beginnings of this introverted, romantic and physically fragile painter were similar to those of many young Venetian artists who began their careers in the early 1920s. They favoured landscapes immersed in the lagoon atmosphere, fractured by light, so dear to the French Impressionists, or landscapes described with a compositional solidity that recalled works of twenty years earlier by that innovative genius Paul Cézanne. Her continual participation in the field of applied arts was very important to Lazzari, who worked with the foremost Venetian architects and decorators of the time, permitting her to study and interpret trends and non-figurative developments in the modern decorative arts. In relation to this, it should be noted that all Lazzari’s paintings from the early 1920s to the early 1930s were marked by a figurative-impressionistic style that went in marked opposition to the abstract-geometric experiments undertaken in her decorative art works. The dynamic lines and interpenetrating colours of Futurism – and in particular the works of Enrico Prampolini – offered a vast repertoire from which she could draw, but only in designs for rugs, cushions and tapestries. Art with a capital ‘A’ for Bice at that time could only be figurative.

The first examples of Bice Lazzari’s future compositional vocabulary may be found in Abstraction of a line no. 1 and Abstraction of a line no. 2 – two drawings produced between 1927 and 1930 which, although manifesting the crispness of her mature abstraction, never relinquish the natural and shadowy atmosphere of her adolescence and youth in the Venetian lagoon. These two works drew considerable critical interest both for their rigorously stripped-down non-figurative style and for their titles, which seem to suggest an intellectual and deliberately abstract poetics. They are in fact preparatory sketches for two decorative fabrics, one of which was displayed in the exhibition of modern Italian art glass, ceramics and lace that opened at the Stedelijk Museum in Amsterdam on 7 March 1931.

In 1935, after two years of suffering a bitter disappointment in love, Bice Lazzari left the foggy atmosphere of Venice for the blinding light of Rome, where she remained until her death. In the capital of Fascist Italy, where the aesthetic culture of the regime prevented artists from looking beyond their borders, Lazzari continued her productive collaboration with architects and decorators. Her frustrations of the period are revealed in a series of letters that she wrote to her sister Nini and to her friend the literary critic, translator and writer Aldo Camerino, in which Lazzari describes supporting herself financially by producing drawings for the applied arts rather than from the idealised position of free artistic creation independent from the demands of the client.

In 1938 Lazzari met her future husband, the young Venetian architect Diego Rosa, in the studio of the architect Lapaula. She was nine years his senior; they married in 1941. Her world of inorganic forms, lines and rhythms suspended in the field of the canvas became the material for the creation of art liberated from patronage only after the Second World War when, in 1949, Lazarri picked up her brush to focus on painting again.

Rome in the immediate post-war period was an intellectually vibrant city: artists and writers met in the cafés of the historical centre – foremost among which was the Café Rosati on Piazza del Popolo. Everyone shared the burning desire to make up for lost time: to look beyond the recent horrors of the war and the tragic twenty-year period of totalitarian government. Via Margutta, the small street near Piazza di Spagna – famous thanks to William Wyler’s 1953 film Roman Holiday – became the street of artists, filmmakers and galleries, with the studio of Renato Guttuso, and the headquarters of the Arts Club. The Lazzari-Rosas took a small apartment here, at Via Margutta 54. The artistic debate in those years was effervescent and the young artists, who usually met at Guttuso’s studio, were fascinated by the new pictorial expression of abstraction. Bice Lazzari was looking for her own artistic forms, the means to give substance to mental images that reflected the same informal experiences.

From the early 1960s, Lazzari abandoned the materiality of her informal experiments and began to research and define what was to become for her a ‘poetry of mark-making’, distilling soul and feelings into a painting style that might otherwise seem to lack them. Her works of this period are refined webs of simple marks that testify to the lessons of Joan Mirò and even more so, of Paul Klee. In his infinite repetition of marks, Klee now becomes the essential point of reference for the development of Lazzari’s future compositional vocabulary that represents, in its stripped-down essence, the most interesting period of pictorial production of this refined interpreter of an only apparently simplified style.

It may seem strange that Lazzari shed the constraints of a style that had exhausted every possibility of experimentation in order to close herself into a rigorous and decidedly solipsistic system at a time when Rome was at the centre of the figurative pursuits of the prominent Piazza del Popolo painters. But we should not forget that Bice Lazzari had for some time chosen solitude and non-conformity as the vehicles for her introverted personality. She remained a lone figure who never joined any group or school, both because she belonged to a different generation and because Art for her had always been poetry rather than methodology. Gestalt, structuralism and the psychology of form, which were the gnoseological field common to all pictorial-scientific research undertaken during the rich decade that spans 1960 and 1970, were never a source of inspiration for Lazzari’s abstractions. Indeed, she wrote:

"I choose the mark … because I can more clearly formulate a discourse that may easily be read. The mark because it traces a vital tension in relation to other marks, which collectively become more significant and complete an inner process … The mark because it determines alternative spaces that could appear interconnected, creating the possibility of perceiving various planes, conceptually ordered and with a non-objective rigour that I would define as the ‘objective of reduction’. Colour also contributes to the discourse that in music I could define as ‘accompaniment’ – selecting only absolute colours: white, black, red and yellow … At times the elements group together like repeated sounds to create a focal centre that can move freely beyond the boundaries of my available space, to create an unblocked image. The freedom to act on the canvas is always the most important requirement that I know."

Between 1970 and 1971, Lazzari suffered poisoning from organic pigments and abandoned oil painting for the more fluid and brilliant medium of acrylic. The highly accomplished works she now produced developed the abstraction she had begun researching, albeit inadvertently, in the 1930s. In these paintings, the obsessively and rhythmically repeated mark and the compositional grid – with its reduced geometric simplicity – attain a unique and original lyric quality.

Mark Rothko said that ‘the progression of a painter’s work … will be towards clarity’, and thus was the evolution of the art of Bice Lazzari. From her origins as a young artist at the beginning of the last century in the Venetian lagoon atmosphere vibrating with light and colour, over the course of a life dedicated to Art, she arrived at a total reduction of form through her experience of the medium as the beginning and the end of painting. These mature works present composition in perfect formal equilibrium, as the mark rhythmically punctuates the field of the canvas, imprisoning the spectator’s eye in the relations between space, time and measure.

This text has been adapted for the Sotheby's website, the full text can be viewed here. 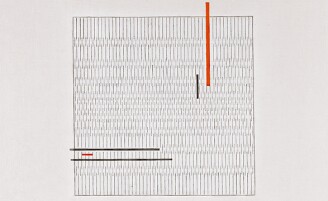