W hen Bugatti opened the door for the million-dollar supercar, Aston Martin took note of the opportunity to create the ultimate expression of what an Aston Martin could be. A small, passionate team was enlisted to distill the essence of the marque into a rolling art form which would encompass the style, heritage, refinement and performance with which the name Aston Martin has become synonymous. 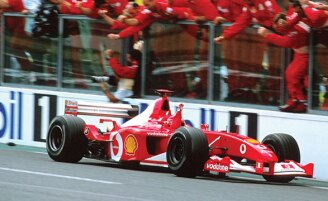 The director of design at Aston Martin, Marek Reichman, was instructed by Dr. Ulrich Bez to “make the most irresistible Aston Martin, something which is just pure emotion,” so he and his team often worked well into the night with lights dimmed and music playing while they sculpted the lines from clay until they had the perfect shape for the One-77. Its curvaceous silhouette was carefully considered during the design phase, made to suit driving dynamics and proportions which were made to fit inside the Golden Section—a rectangle of pleasing proportions first proposed by Greek mathematician Euclid and followed by architects and artists alike for centuries to follow. The shape is instantly recognizable as an Aston, reminiscent of the form of the DB9 and DBS models, but with oversized haunches and a gloriously long front hood. For the first time on an Aston, the hood is lower than the fenders, an element made possible by the design and placement of the engine.

Only 77 exquisite examples were produced, each pre-sold at $1.8 million to exclusive clientele, tailored to the client's tastes and driving preferences, from the suspension to the feedback of the steering-wheel-mounted paddle shifter. Danish nature conservation philanthropist Markus Jebsen took delivery of this Black-Pearl-over-Blue-Gin example—the 38th to be produced—and has fastidiously maintained and garaged it over the course of his ten years of ownership, accruing less than 1,000 km and presenting as near to new as one could hope.

While each One-77 is unique, this example is the only one to benefit a noble cause—restoring landscapes, saving species, and ensuring sustainable livelihoods for local communities through the charitable efforts of African Parks, a nonprofit conservation organization that assumes long-term management of protected areas, in partnership with governments and local communities. African Parks currently manages fifteen national parks and protected areas in nine different countries, covering 10.5 million hectares, active in areas of Benin, the Central African Republic, Chad, the Democratic Republic of Congo, Malawi, Mozambique, the Republic of Congo, Rwanda, and Zambia. The consignor has agreed to generously donate the proceeds from the sale of this One-77 in conjunction with the charitable initiative Auction4Wildlife so that African Parks may continue their important conservation efforts.

Aston Martin utilized an ingenious carbon-fiber monocoque chassis, a first for the marque in a road car application, to maximize performance while minimizing mass. Aston’s engineers worked in partnership with Canadian motorsports supplier Multimatic to create a monocoque tub with an aluminum honeycomb core and wrapped in a carbon-fiber skin. The resulting chassis is remarkably stiff—torsional stiffness reaching 30,000 Nm per degree, to be exact. The engineers used the internal volume of the hollow structural members to their advantage by integrating a pair of short ducts that route fresh air to the intake plenums, eliminating the need for any additional tubing or components. Despite being warned that the airflow may be restricted through the hollow cavity, the shape actually resulted in an additional 16 horsepower. Crafting each carbon tub is a three-week-long job for a team of four, and the complex procedure of attaching the aluminum body panels which surround the tub takes an additional four days. The entirety of the aluminum body panels are crafted by hand, beaten, and wheeled by a skilled craftsman, as they were in the days of Newport Pagnell. Each front wing takes one man three weeks to pound, stretch, and form into shape. The rear deck from C-pillar to C-pillar is also a singular piece of formed aluminum, as are each of the doors, which feature exaggerated side strakes and elegant, flower-stem-like mirrors. In addition to the handcrafted panels, virtually every component on each One-77 has been crafted especially for this car and has been formed by CNC precision milling from either a solid billet of aluminum, titanium, or high-grade steel.

Mounted 275 mm aft of the front axle’s centerline is a bespoke, free-revving 7.3-liter V-12 engine developed in collaboration with Cosworth, producing in excess of 750 horsepower and 750 Nm of torque. The engine begins life as Aston’s own 6.0-liter engine from the DB9 which is extensively reworked to the point that the only common part from its original form is the timing chain. The iron cylinder liners are removed, and the engine is bored further to 7.3 liters; iron particles are plasma-welded to a depth of six microns, and additional machine work is performed for weight reduction, even down to machining slots at the bottom of the engine block. Unique cylinder heads, unique crank, rods, pistons, cams, and intake system are added, in total reducing the weight of the engine by 25 percent. A dry-sump lubrication system provides further weight savings and allows for the engine to be mounted 100 mm lower in the chassis, while the aluminum casting forms the oil reservoir and provides the inboard mounting points for the push-rod suspension system. A six-speed automated transaxle was developed specifically for the One-77 from the single-clutch transmission from the V8 Vantage and receives power through a carbon driveshaft and magnesium-alloy torque tube.

Beneath the hood, the V-12 sits in a minimalist opening in the carbon-fiber chassis, with smooth carbon-fiber stacks drawing heat away from the exhaust through the titanium vents in the hood, and the pushrod suspension and dampers on display directly above the axle’s centerline. The Dynamic Suspension Spool System (DSSV) was adapted for the first time in a road car, having already been mandatory hardware and proved its merit in five major racing series since 2006. In the rear, small Perspex windows trimmed in leather display the rear pushrod suspension setup alongside carbon-fiber braces.

Inside, the One-77 offers the same uncompromising attention to detail, with carbon fiber and CNC-machined anodized aluminum dominating nearly every surface. The electronically controlled carbon sport seats were elegantly trimmed in stitched leather, while Alcantara stretches across the headlining above. The squared steering wheel was developed specifically for the One-77, and graphite instrument panels complement the elegant design. There is no sound deadening in the cabin, so the symphony of intake and exhaust noise is unimpeded when the driver presses the accelerator. A Bang & Olufsen system was delicately crafted from solid billet specifically for the car, complete with rising bookshelf speakers.

The complete package made the One-77 the finest and most powerful of Aston Martin’s grand tourers and stretched the creativity of the design and engineering teams. Much of the performance aspects were adapted directly from the knowledge gained from the V8 and DBS race cars and brought to the extreme. Naturally, a vehicle of its caliber was capable of incredible performance—the team was set a target top speed of 200 miles per hour, which is cleared by an additional 20 mph in testing at Nardo. To keep the car stable at speed, a deployable spoiler automatically raises, actuators on the suspension lower the vehicle up to 20 mm, and a pair of radiators at the front close to maintain aerodynamic balance. In spite of the spoiler and large diffuser at the rear, chief engineer Chris Porritt states the intention of the car is to be essentially neutral at speed, producing neither lift nor excessive downforce, so as not to compromise the refined driving characteristics that the team at Aston had sought to achieve.