Anatomy of an Artwork: The 1930 Cadillac V-16 Sport Phaeton

T he Cadillac V-16 is both a triumph of 20th-century engineering and a beautiful work of art. Featuring the first production V-16 engine, capable of reaching up to 185bhp, the V-16 model was built in 54 unique body styles and was developed under extreme secrecy. It was one of the most sought-after cars of its time and today ranks among the most popular and collectible period cars.

No specific style embodies the model more than the 1930 Cadillac V-16 Sport Phaeton by Fleetwood, the oldest of seven V-16 variants included in a forthcoming sale from the collection of John D Groendyke. This exceptional dual-cowl vehicle wears one of the most desirable V-16 body styles offered, restored in striking colours and complete with its original coachwork, chassis, axles, engine and more. Having had four known owners in its history – including Classic Car Club of America member Walden J Schmitz, who kept the vehicle in his living room – it comes to auction with a copy of its original build sheet included. Offered without reserve, it presents a rare chance for a new buyer to make one of the most important designs in Cadillac’s automotive heritage their own. 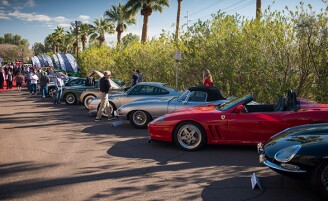 The Cadillac’s V-16, essentially two engines in one, is said to be the first production car powerplant that was truly styled.

The Sport Phaeton is a fully matching numbers car and features Fleetwood body-number stamping in the sill wood.

The second cowl holds a windshield mounted in the back of the front seat that can be raised and lowered by a small lever.

The touring trunk at the rear of the vehicle is an elegant addition, with a Cadillac Quality Accessories badge.