T he Victorian, Pre-Raphaelite & British Impressionist Art sale on 14th December 2017 will include two works by the renowned painter of London high society life and leisure, James Jacques Joseph Tissot. The artist was not, however, born in England, but France. His life, like many other French Impressionists in the late 19th Century, took a turn towards England when the Franco-Prussian war raged in France.

Tissot, Claude Monet, Camille Pissarro and Alfred Sisley, among others, all immigrated to London in the 1870s to escape the violence and destruction; their lives in London are encapsulated in works now on display at ‘EY Exhibition: Impressionists in London’, at Tate Britain until the 7th May 2018.

The exhibition devotes a room to Tissot’s playful and discerning portraits of modern life in England. Tissot turned the French Impressionists' snapshot view of the modern world onto the lives of London high society, preserving images of balls, holidays, and afternoon tea. His paintings from this time capture quintessentially English pastimes and customs, seen through the eyes of a Frenchman.

When France declared war on Prussia in 1870, Tissot was already a successful artist in his native France. From his position as a successful artist with a large house on the esteemed (now named) Avenue Foch, he became a stretcher bearer in the Franco-Prussian war. There were 100,000 casualties on each side within just six weeks, and then followed a siege on Paris in 1871 which saw its residents driven to extreme lengths to survive. Tissot was witness to some of the atrocities of this period; just a year after painting The Wounded Soldier in 1870, (included in the Tate exhibition), he left for London where he stayed with friend Thomas Gibson Bowles.

As he had done in Paris, Tissot soon rose through the ranks of London society, though he was often accused of parodying the English subjects he portrayed. Indeed, he began his career in London doing caricatures for Vanity Fair. The London critics’ accusation stemmed from the ambiguous and often coy narratives the artist chose to depict: paintings such as The Gallery of HMS Calcutta, 1876 (included in Tate exhibition), often depict a scene with an undisclosed relationship between the men and women; in this case, the lady’s fan seems to suggest she is flirting with the sailor. Sketch for La damoiselle d’honneur (lot 13), offered for auction by Sotheby’s in December, has a similarly ambiguous and suggestive dialogue between the bridegroom who helps the bridesmaid into her carriage on a busy Parisian street, his face remarkably close to hers. The busy street rendered in sketched black lines behind them, serves to highlight the intimate moment between the two figures who appear in more detail.

The ambiguity of Tissot’s narratives only enriches his paintings, making them more complex and piquing curiosity in the viewer. Otherwise, they are saturated with the details of everyday Victorian life: porcelain tea sets, the luxurious ribbons and frills of the ladies’ dresses, Japanese teapots, Persian rugs and chintz sofas.

It is precisely his ‘outsider’ or ‘tourist’ status in London which makes his paintings so memorable. With fresh eyes, not yet immune to London’s sights and customs, Tissot’s paintings provide a rich visual account of Victorian culture, depicting details which native artists might overlook as mundane features of the everyday. London Visitors of 1873, depicts a couple in the portico of the National Gallery in Trafalgar Square looking at a map; perhaps the artist has chosen to depict this scene because he identifies with the couple, clearly foreign to the city, like himself.

Fife de Coldstream Guard, also offered at the December sale (lot 15), is reflective of a commons tourist's experience in London, and depicts uniform of the guard in acute detail. He is presented against the recognisable backdrop of Horse Guards’ Parade which adjoins St James’ Park, a busy thoroughfare scene which might be overlooked by other London artists.

Tissot’s paintings of England during the Franco-Prussian war have become some of the most romantic and enduring pictures of high society life and leisure at the end of the 19th Century, his status as ‘visiting artist’ giving the paintings their originality. 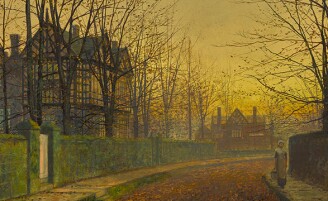