A Trio of Regal Bronzes from the Collection of Louis XIV

F or the first time in its history, after being handed down the generations for more than two centuries, this exceptional group of three bronzes from the collection of Louis XIV – which remained in the Royal collections until the Revolution – is being offered for sale in the La Collection Ribes I auction in Paris on 11 December. It includes two masterpieces by Giambologna: Rape of a Sabine woman and Fortuna, in casts of outstanding quality, reflecting the level of perfection achieved by Antonio Susini, the master’s leading assistant, who cast the finest examples of Giambologna’s works.

Among the most important collections in Europe, the 343 bronzes of the French Royal collection were assembled in their entirety from various sources during the reign of Louis XIV. The first significant acquisitions, in April 1662, were the bronzes owned by the banker Everard Jabach, followed in 1663 by purchases from the heirs of Louis Hesselin, advisor to the King.

Legacies and gifts to Louis XIV added to this fabled collection, the most important of which – in terms of both number and value – were the 1689 legacy of the painter Charles Errard (1606-1689), first director of the Académie de France in Rome from 1666 to 1673, followed in 1693 by the gift of André Le Nôtre (1613-1700), Controller-General of the Royal Buildings.

Errard left Louis XIV fifty-four statuettes and eighteen busts, while Le Nôtre, in his lifetime, contributed twenty groups, nine figures and two vases, which were among the Couronne’s most important pieces. The collection was also able to grow through the estates of members of the royal family, including Gaston d’Orléans (1608-1660) and the Grand Dauphin (1661-1711).

In 1715, when Louis XIV died, the French Royal collection had reached its definitive size: 335 bronzes, each engraved with its inventory number. To these were added the eight reductions of royal monuments, which were not numbered as they could easily be identified. The collection remained virtually intact, apart from a few expropriations recorded in 1788, and the movements of each object were described in detail in the series of inventories drawn up by the Garde-Meuble from 1684 to the Revolution. 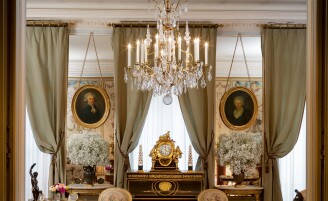 From 1788 onwards, some of the French Royal bronzes were exhibited to the public in the Bronze Gallery of the new royal Garde-Meuble, built by Ange-Jacques Gabriel on Place Louis XV (now Place de la Concorde), and decorated from 1786 onwards on the instructions of the administrator Marc-Antoine Thierry de Ville-d’Avray. Abundance (no. 67) and Fortuna (no. 236) in the Ribes collection were among the bronzes displayed in the gallery.

In the midst of revolutionary upheaval, on 26 and 27 May and on 22 June 1791, the National Assembly issued decrees for an inventory of the Garde-Meuble collections to be prepared. Primarily intended to verify the existence of the royal diamonds – a sensitive matter especially after the royal family’s flight to Varenne – on 8 August the inventory was extended to include the bronzes. On 28 September, a report was presented to the National Assembly by Citizen Delattre; this was published two days later as the Inventory of the royal diamonds, pearls, gems, paintings, carved stones, and other monuments of the arts and sciences in the Garde-Meuble.

The 1791 inventory only lists the bronzes from the Garde-Meuble, ignoring those distributed around the royal residences and – with varying degrees of legitimacy – the residences of some royal officials. It describes the final state of the French Royal bronzes, before they were partly dispersed. The collection nevertheless remained intact until the Directory, in 1795, began to order the sale of around a hundred bronzes to pay the State’s creditors. One of these, Citizen Jourdan, fermier of the Muntzhal national glassworks, received a settlement of forty-one bronzes on 2 Fructidor, Year IV (19 August 1796), including numbers 67, 236, and 335 which are presented here among the treasures of the Ribes collection.

After his death, his godson and adopted son, Aimé Gabriel d’Artigues, a leading figure in the early French industrial age, inherited eight of his bronzes and twenty-nine others were sold with the rest of his collection.
After the death of Aimé Gabriel d’Artigues, resident at 30 Rue Tronchet, Paris, an inventory was drawn up on 6 April 1848 by Maître Turquet, a Paris notary, assisted by the auctioneer Maître Sibire and the expert Sigismond Mannheim. This clearly identified eight of the nine bronzes that had come from Jourdan.

In 1870, after the death of his wife Anne, née Georges, the bronzes passed to their only daughter, Anne Gabrielle d’Artigues, wife of Charles Edouard, third Comte de Ribes. In 1909, when the estate of Anne Gabrielle, Comtesse de Ribes, was divided after her death, only three of the Royal Craon bronzes are described: one identified as the Abduction of Oreithyia (actually Rape of a Sabine Woman, no. 335), another depicting Mars Discarding his Armour by Michel Anguier (no. 283), and a third based on the antique model of the Medici Venus (no. 318). 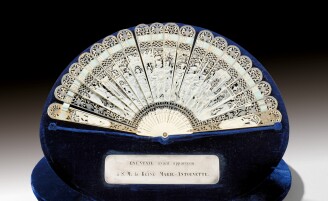 Paris
Enter the World of the Ribes Collection, The Essence of French Elegance

It seems extraordinary and reveals a certain ignorance of the French Royal bronzes at the beginning of the twentieth century, that the other numbered pieces from the former Jourdan collection did not appear in the 1909 probate inventory. These days it is even more unbelievable that the two models by Giambologna, undisputed master of small Florentine Renaissance bronzes, seem literally to have been gone unnoticed.

Rape of a Sabine Woman, among Giambologna’s most admired models, was incorrectly described as the Abduction of Oreithyia, while the Fortuna, which today is also considered one of his masterpieces, was simply ignored. Yet these two bronzes, whose exceptional casting is attributed to Antonio Susini (1558-1624), are among the jewels of the Ribes collection.

For more than a century, only nine of the forty-eight Jourdan bronzes have been sold at auction. Five of them were acquired by public institutions: four by the Musée du Louvre, and one by the Detroit Institute of Art. Further study of this outstanding ensemble reveals that fifteen of the bronzes given to Jourdan are now in public collections: no. 4 in the Getty Museum, Los Angeles – acquired in 2014 with intermediary assistance from Sotheby’s Paris.

We are grateful to Moana Weil-Curiel and Stéphane Castelluccio for their valuable assistance in the research conducted on the Bronzes de la Couronne in the Ribes collection.
A Certificat pour Bien Culturel has been issued to each of the following lots. 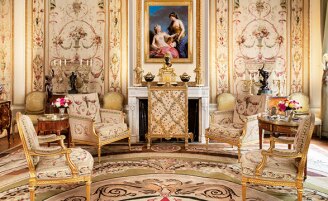