A Revelation of Dutch Masters at the Met

N o artworks created by Angel remain in existence today, however this encomium to his compatriots survives; a section from the forward reads:

Attachment impels me to take the liberty of seeking a suitable occasion to dedicate this, my address in praise of painting delivered last St. Luke’s Day, to you in gratitude for your kindness in opening your art cabinet that I might satisfy the desire of my inquisitive eyes. While there, my fickle sight was so led astray by the multitude of delights that came before it that it eventually began to swim…when you wish to cast off weighty matters and take this up to discover what I said in praise of painting, you pay less heed to the purity of the language than to the words that painters customarily use among themselves.

Throughout his text, the author pays special attention to the craft of two particular artists, both now on view at the Met: the celebrated Rembrandt van Rijn and the lesser-known Gerrit Dou.

The two artists hailed from Leiden in the Netherlands, a place that Angel describes in his work as “a foster-city of all great spirits.”

In describing the artist Dou, Angel concisely summarizes his impressions as, “No praise is sufficient.” With the exhibition In Praise of Painting, the Met visually mirrors Angel’s honorific prose. At the Met, the Dutch Masters are presented as masterpieces, achieving the praise of all those who visit the exhibition.

Four Highlights of In Praise of Painting

Rembrandt van Rijn, Aristotle with a Bust of Homer

In the early 17th century painting Aristotle with a Bust of Homer, Rembrandt portrays a dilemma faced by his subject, the philosopher Aristotle. Depicted in the portrait, the philosopher contemplatively rests his arm on a bust of his literary predecessor, Homer. Aristotle also handles an opulent gold chain draped on his body, gifted to him by his patron, Alexander the Great. With these simple gestures, Rembrandt illustrates Aristotle's inner turmoil, as Aristotle considers the career of Homer in comparison to his own. Dressed in a princely manner, Aristotle debates his intellectual purpose on earth and wonders whether he will be remembered for his intellectual prowess, like Homer, or swiftly forgotten despite his recent accolades.

Furthermore, with this work, Rembrandt aligns himself with Aristotle and reflects on his own artistic accomplishments. At the time of creating this, Rembrandt was on the brink of bankruptcy and reaching the end of his career. The painting records the artist's omnipresent question: What will be remembered of me?

In this lively work, Jan Steen depicts an unruly household of individuals living in excess. Such scenes were a popular subject for the artist throughout his career. Look closely, and you'll see that Steen paints himself into the group, a humorous gesture. The figure holds an opium pipe while joining hands with the maid; the maid serves a sizable glass of wine to another female companion, who in turn steps on a literary work. Beside the book, the artist has added a lyre with a broken neck, a feline relishing an impressive carcass, and a broken bottle of wine. Art historians have often theorized that Steen’s artworks are moralizing in purpose; they serve as a warning to those who partake in the seven deadly sins unfolding on his canvases: lust, gluttony, greed, sloth, wrath, envy, and pride.

The Met describes Johannes Vermeer as “the poet of domestic life in 17th century Delft.” Young Woman with a Water Pitcher from 1662 is certainly an exemplary work of such characterization. Here, a young maid appears as a vision of domestic tranquility. Her actions are subtle and modest; she gently opens a window and surreptitiously holds a water pitcher. Still, symbols of wealth surround her. The water pitcher is golden, the table by her side is covered in an expensive, foreign Persian tapestry, and a jewelry box is ajar to reveal a prized pearl necklace. These details signal a time of economic prosperity - the zeitgeist of Vermeer's own lifetime - perhaps the most commercially successful period in the history of the Netherlands.

Pieter Claesz, Still Life with a Skull and a Writing Quill

In this oil painting on wood, Still Life with a Skull and a Writing Quill, the artist Pieter Claesz paints a memento mori, or reminder of death. Symbols come together to represent decay and loss: a skull sitting atop an aged book and discarded notes, a spilled ink well, a toppled glass, and a burned match. This is a quintessential work of warning, a vanitas painting typical of the period. Here, the artist declares in no subtle fashion: life is limited and ephemeral, remember your mortality. 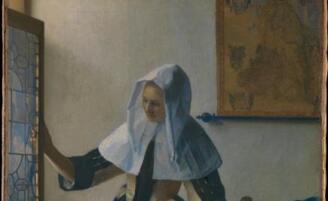 The Metropolitan Museum of Art
In Praise of Painting: Dutch Masterpieces at The Met
16 October 2018–1 October 2020