From 6 – 7 March, RM Sotheby's will present the 22nd annual Amelia Island sale, the official auction of the world renowned Amelia Island Concours d'Elegance. A highlight of the auction is a spectacular 1938 Bugatti Type 57 Cabriolet by D'leteren – the only example to be built in the three-seater Aravis-inspired body style by D'leteren of Belgium.


I n 1938, Jean Bugatti and Molsheim bodywork leader Joseph Walter designed a new open Type 57 dubbed the Aravis, in a nod to an Alpine mountain range. A companion to the more common four-seat cabriolet model the Stelvio, the Aravis was a sleek two-seater with a more raked windscreen and a dramatically sloped tail that featured a small central dorsal fin.

As with the Stelvio, construction of the Aravis bodywork was delegated to Gangloff’s coachworks in Colmar, though very few examples were comparatively produced. It is believed that no more than 12 examples were built at Colmar, with just three extant today. Considering, however, that Type 57 models were also sold as rolling chassis to be clothed by the customer’s coachbuilder of choice, there is little surprise that several more cars were built to specifications very closely resembling the factory-contracted Aravis. Letourneur et Marchand built as many as six examples of a three-seat version (featuring a single rear seat), and D’Ieteren of Belgium built a single example in a similar style.

Originally specializing in chariot wheels, the Brussels-based D’Ieteren was founded in 1805 by Dutch coachworker Jean-Joseph D’Ieteren. By the late 19th century, the company had become the official supplier of the royal family of the Netherlands. In 1897 the carrosserie built its first coachwork for a motor car, which evolved into its principal business, as the company bodied chassis from over one hundred different marques over the next two decades, including Delahaye, Hispano-Suiza, Impéria, Mercedes-Benz, Minerva, Panhard, Peugeot and Renault. By the 1930s, D’Ieteren was one of just two official Bugatti agencies in Belgium.


According to the research of marque expert Pierre-Yves Laugier, as well as an extensive file of documentation that includes factory build sheets, restoration invoices, European registrations, a D’Ieteren photo album and entries from the American and International Bugatti Registers, chassis no. 57589 is one of four Type 57 examples ordered by D’Ieteren in 1938. It is also the only such example built in the sleek three-seat body style. Factory records and the combined data of the Bugatti Registers indicate this Type 57 was initially completed at Molsheim as a rolling chassis in September 1937.

In March 1938, the chassis was delivered to D’Ieteren on behalf of a customer named Baggage, with a special notice for “urgent delivery.” Inspired by Letourneur et Marchand’s three-seater chassis no. 57826, Albert D’Ieteren set about creating distinctive one-off coachwork that benefitted from significant input from Monsieur Baggage himself. Notably, Baggage was particularly tall, resulting in the somewhat stretched cabin proportions. Featuring roll-up windows and a streamlined folding canvas top that was particularly low and sleek in either the raised or reclined position, the cabriolet was fabulously realized, conveying an elegant and distinguished character through its beautifully sculpted singularity.

Monsieur Baggage enjoyed using the extraordinary Bugatti for nearly two years before the German invasion of 1940 compelled him to hide it. The exact history of the car over the following ten years is currently lost to the fog of war. Sometime after the conclusion of hostilities, the Type 57 resurfaced and was offered by the French government as a “Vente des Domaines” and sold in late May 1951 to an industrial company in Paris.


After passing to two different Parisian magnates, the Bugatti was acquired in early 1952 by marque specialist Gaston Docime and sold that May to André Derain, the famed Fauvist painter and Bugatti collector. A corresponding Docime maintenance invoice and insurance paper are included in the car’s copious documentation. Derain owned as many as 14 important Bugattis during his lifetime, and chassis no. 57589 was the last, becoming his crowning acquisition.

The Bugatti was sold back to Docime in December 1956, and sometime over the following year the car was purchased by the well-known Bugatti dealer Jean de Dobbeleer. He exported the Type 57 through Gene Cesari for sale to American owner Julian Sano, a highly regarded Bugatti enthusiast.

Famed painter André Derain owned as many as 14 important Bugattis during his lifetime, and chassis no. 57589 – the present lot – was the last, becoming his crowning acquisition.

In 1963 the Bugatti was purchased by Robert Wells of Akron, Ohio, and he went on to retain possession for a remarkable period of 35 years, notably presenting the Type 57 at the August 1969 meeting of the American Bugatti Club in Painesville. In 1999 the car traveled to Europe for a period of exhibition, being shown at the Rétromobile and the Techno Classica in 2000 and again at Rétromobile as well as the Festival Bugatti in Molsheim a year later.

In 2004 the Type 57 passed to Alfred Lechter of Jean, Nevada, and he displayed the car at the 2007 Palos Verdes Concours d’Elegance. Two years later, the Bugatti received expert attention by marque specialist Jim Stranberg in Colorado. The cabriolet was then presented at the Pebble Beach Concours d’Elegance in August 2009 and participated in the Tour d’Elegance before being sold in 2010 to Greek collector Theodore Angelopoulos, who commissioned regular maintenance by the Swiss firm Pichler GFG AG Classic Center over the next five years.

In September 2015 the Bugatti was acquired by the consignor, a respected collector based in Florida. He submitted the car to the renowned Scott Sargent for a survey. Though the consignor was initially inclined to conduct a comprehensive restoration, Mr. Sargent noted that the Type 57 retained numerous original components and details, such as the firewall and remnants of original paint on the undercarriage that lent the car a definitive and irreplaceable authenticity. Consequently, to retain the utmost originality, it was decided to limit the restoration to cosmetic considerations and service of the original mechanical components as needed. The interior and top were retrimmed, while the unique coachwork was refinished in a very attractive and distinctive two-tone scheme of black with maroon details.

The Type 57 is precisely dialed in, displaying acute response of the brakes, throttle, and steering system and overall flawless running condition.


The Bugatti has been fastidiously maintained during the consignor’s conservatorship while being presented and driven at select events over the past few years, including the ABC Maine Fall Rally in September 2016, the Villa d’Este Concorso d’Eleganza in May 2018, and the Audrain Newport Concours in October 2019, where it won the Bugatti touring class. RM Sotheby’s specialist Donnie Gould reports that during a recent test drive the car performed extremely well, showing no smoke upon ignition and bearing a potent exhaust note. The Type 57 is precisely dialed in, displaying acute response of the brakes, throttle, and steering system and overall flawless running condition.

It should be noted that this extraordinary Bugatti retains most of its original factory components, including the important dual-overhead-cam straight-eight engine, the original chassis frame, and the exquisitely sculpted D’Ieteren one-off coachwork. Documented with restoration invoices from Jim Stranberg, Pichler, and Scott Sargent; a Swiss permis de circulation; a copy of the French carte grise; a D’Ieteren photo album featuring period images; entries from the American and International Bugatti Registers; a FIVA card; and a history by marque expert Pierre-Yves Laugier; and accompanied by tools and original unrestored luggage, this beautiful Type 57 is one of very few examples built in the Aravis-inspired three-seat body style, and the only example clothed by the Belgian coachbuilder D’Ieteren.

Continually maintained by devoted owners, this highly original Bugatti Type 57 offers a stunning addition to any important collection and is an ideal candidate for further presentation at major concours d’elegance and marque events. Also claiming the important provenance of ownership by the great Fauvist painter and Bugatti collector André Derain, 57589 would make a prudent acquisition for the Molsheim completist searching for a rare, distinctively attractive one-off example of the venerable Type 57. 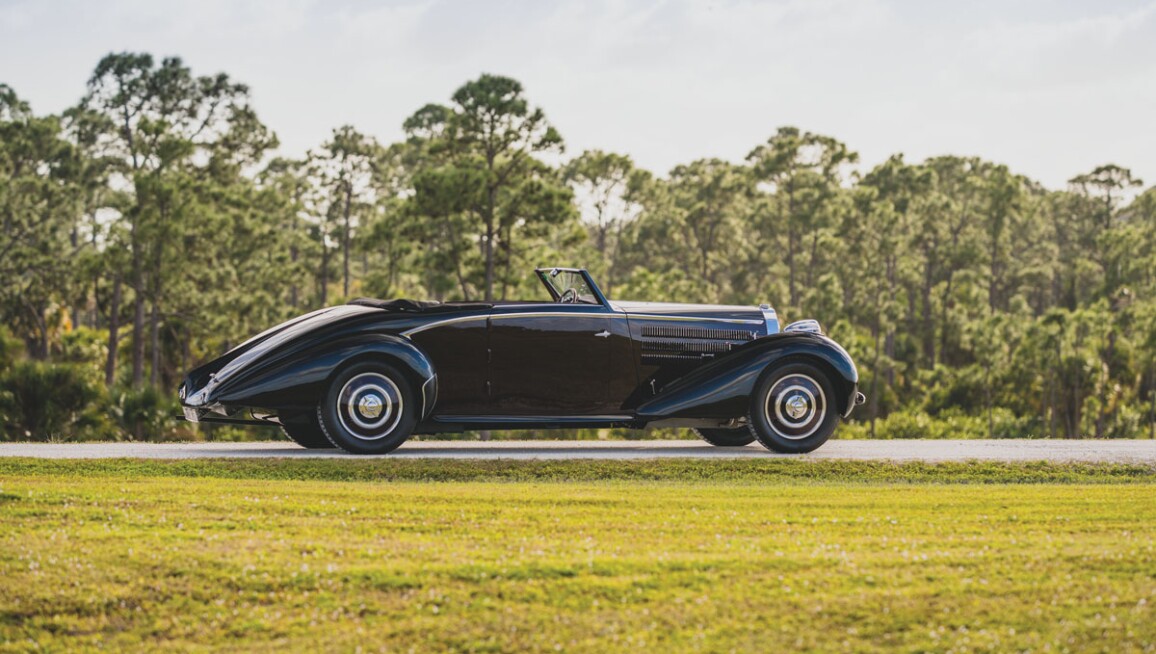 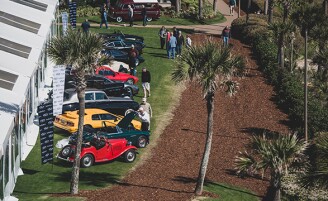