A Cabinet of Curiosities: Ancient Works of Art Available for Private Sale at Sotheby's

"Everything unknown is thought to be full of wonders"

T he idea of a Cabinet of Curiosities (also known in German, Wunderkammer) was born in Europe in the 1500s, as non-specialist and pre-scientific collection of every possible heirloom from explorations and travels around the world.

These rooms of wonders were in all respects the precursors of modern-day museums, and they quickly became a popular way of collecting among royalty, aristocrats and educated middle class members, who were wealthy enough to maintain them.

Since the ability to travel was a luxury, these rooms brought the wonders of the world, including strange specimens and exotic artifacts from distant lands, together in one context. More than just amusements for the idle rich, these displays augmented awareness and understanding of the mysteries of cultures that came before them.

Sotheby’s Ancient Sculpture & Works of Art Department is pleased to present our own semblance of a Wunderkammer, with a selection of objects on offer for private sale. These artworks range in media, cultural origin, utilitarian intention, and aesthetic formalization, offering tantalizing glimpses into the environs of the Western ancient world.

Much like today, individuals utilized jewelry in antiquity to denote social status and express individualism. Additionally, jewelry in the ancient world often played an important apotropaic function of protecting the wearer from harm. From a sardoynx cameos to masterfully rendered suited of gold jewelry, the ancient jewelry presented here is truly timeless wearable art.

Marble is perhaps the medium most associated with sculpture from the classical world. Here a selection ranging from Cycladic marble legs from the 3rd millennium B.C. to Roman torsos, heads and reliefs illustrates the diverse utilization of this versatile stone.

Since the famed Egyptologist Howard Carter discovered the tomb of the Pharaoh Tutankhamun in 1922, the world has been entranced with the art of ancient Egypt. While Egyptian art is instantly recognizable for its adherence to strict stylistic conventions, it is rich in diversity in terms of date, medium and function. This is evidenced by the selection of objects presented here which range from wood mummy masks to ritual offering spoons in the shape of animals.

Ancient artwork was not limited to working in stone. Indeed, rich traditions of working in both bronze and terracotta existed from the earliest ancient cultures through the classical and later periods. Here examples range from a small statuette of the goddess Aphrodite to an elegantly adorned Gnathia-ware pelike from southern Italy. 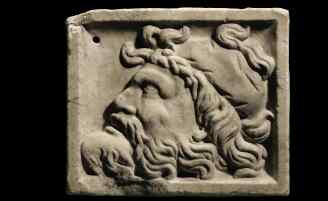